A shooting at ‘Killing Rock’ 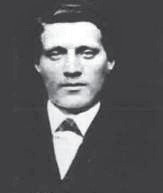 Ira Mullins (left) was buried in the Potter Cemetery (above) in Jenkins nearly 129 years ago.

Doc Taylor arose early that morning and headed to the top of Pine Mountain for a clandestine meeting with two desperate characters, Cal and Henan Fleming. Doc had information that “Bad Ira” Mullins would be bringing several barrels of illicit liquor and as much as $1,000 in cash to Gladeville (now Wise, Virginia) on this day. He and the Flemings planned to ambush Mullins as he was coming from Kentucky. Many of the mountain folks didn’t trust banks in that era, some choosing to either hide their money or carry it with them.

I ra was one of several bootleggers and moonshiners who plied their trade in the area. Much of their business was done on court days and the trial of noted murderer Talt Hall was bringing large crowds to Gladeville. Their sales were exceeded only during heated election campaigning when free drinks paid for by the candidates was often the fare. The law generally overlooked the activities of sellers of illegal liquor in that era unless it led to violence at the point of sale.

Ira put up a bounty of $300 to whoever waylaid Doc Taylor (the Red Fox). Doc got wind of this and decided he had best get Ira first. An earlier attempt failed when he shot into Bad Ira’s bed not knowing his target was laying in his wagon in the barn. Doc enlisted the Flemings to improve his chances on his next plan.

Fox’s old enemy, Talton Hall, was on trial for murder in Wise and the courthouse was well fortified. Now he had an opportunity to get rid of his other nemesis, Bad Ira Mullins. He patiently eyed the Kentucky terrain through his telescope while the brothers waited. He didn’t know who or how many would be in Ira’s group. Usually Ira came with his wife and 14-year old son but at times he would also bring his farmhand. Since it would be a busy day in Gladeville, Ira may have a larger entourage than usual.

Finally Doc saw what he thought was Ira’s jolt wagon with two horses pulling it up the north side of the Pine Mountain.

“Boys, it looks like Ira’s wagon coming ,” Doc said. “Let’s stay quiet and out of sight until I’m sure it’s them.”

After a couple more minutes the wagon came through Pound Gap. The Fox and the Flemings slipped down the south side of the mountain and prepared to ambush Ira’s party from a vantage point behind a large rock and several smaller rocks overlooking the dusty road. The men covered their faces with green veils to hide their identities. They waited, wellarmed and confident with their superior position to the right of and a short distance above the trail.

As the wagon came back into view they saw Ira’s brother Wilson Mullins walking in front of the wagon with his rifle at the ready. The Fox’s heartbeat quickened as the horses and wagon appeared in view. Laurenza Mullins, Ira’s wife, sat next to John Chappel, a farm hand who held the reins. Fox saw Wilson’s wife Jane following behind the wagon astride a horse. Ira’s son John and his friend Greenberry Harris lagged along behind. There were seven altogether in the group, several more than expected. Ira must have thought there was safety in numbers. The Fox knew better. There were two ladies and two kids and Ira was paralyzed so the Fox wasn’t concerned. He knew they would catch them by surprise and Ira’s party would be like sitting ducks right under their secluded position. Ira’s group would have practically no time to react.

“Hold your fire, boys,” Fox said in a hushed voice as he held his left arm out in front of Cal and Henan. “Let’s wait and make shore that Ira’s in the wagon.”

As the wagon neared their hiding place the Fox could see the wagon full of straw and then … was it … yes … yes … yes it was Bad Ira Mullins alive and in living color. He was propped up in the back of the wagon laying on a blanket covering a bed of straw and his liquid merchandise but not for long as a roar of Winchesters thundered through the mountains as the Flemings opened fire on Ira and his fellow travelers. Meanwhile Fox shot the two horses hitched to the wagon before directing his aim at Ira.

“He can’t get away if the wagon horses are dead,” the Fox had told the Flemings earlier.

The attack was so sudden there was hardly an answer to the barrage of gunfire. Black gunpowder smoke permeated the area and the wagon road was colored red by the blood from the victims and horses. It was a gross overkill with the victims shot numerous times.

Ira was shot twice in the chin, twice in the head and once in the shoulder, side, wrist, bowels, thighs and leg. Jane Mullins ran to her husband’s side but he was dead. “Don’t shoot no more,” she yelled to no one in particular. “You’re killing us all.”

“Durn you, take the road and leave or you’ll get it too,” came an answer.

She looked in the direction of the voices and saw three men who were partially masked thinking she thought she recognized Doc Taylor and the other two looked and sounded like Cal and Henan Fleming. Jane Mullins quickly jumped astride her horse, whipped it into a gallop and headed toward the county seat of Gladeville. Once she arrived there she found Deputy Sheriff John Miller at the Wise County Courthouse and reported the ambush. Another writer from the period said she fled back into Kentucky.

“Sheriff, it was ole Doc Taylor and those Flemings, Cal and Henan,” she told him. “There were three of ’em, and I heard their voices. It was them. I’m a ’feared they’ve killed Ira and all of them – everyone but me.” copyright 2021 Jadon Gibson