Searching for the Flemings 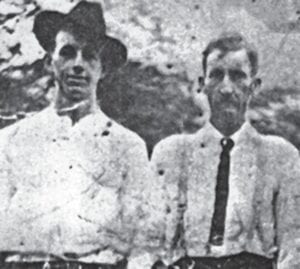 Things are not always as they seem. Dr. Cherry was an attending physician at the hanging of Marshall B. “Doc” Taylor. Later in life he divulged information about the hanging of Doc, aka the Red Fox.

Cal and Henman Fleming weren’t strangers to the law even before their indictment for the May 14, 1892 massacre that sent Ira Mullins and four family members to their graves and the Red Fox to the gallows. The Fox was hanged at Wise, Virginia, on October 27, 1893. A reward of $700 was offered by the County of Wise for the arrest and conviction of Cal and Henan Fleming, a sizeable sum in that era.

The Fleming brothers were double-blood kin to “Devil John” Wright, a notorious bad man of the era who was an expert marksman and expert horseback rider. There came a time that Devil John turned “clean,” earning sizeable rewards for chasing down many of the vilest of outlaws. Incidentally, when he was saved a huge crowd showed up for his baptizing. Some thought the devil may be at the river to keep Devil John from changing his moniker from Devil John to something more sanitary. That’s another story for another day.

Cal and Henan evaded the law, living many months in the wilds following the murder of Bad Ira Mullins and four members of his family at Pound Gap.

They were seen traveling “heavily-armed,” at times in consort with Doc Taylor, before and after the murder of the Mullins family. Mountain folks who seldom bolted their doors and were always open to strangers now stayed behind closed and barred doors.

Cal and Henan spent months living in the wilds, often in a cave. They occasionally came in contact with mountain folks and openly admitted their participation in the Mullins murders. Many man-hours went into the search, but the posse had no success in locating them. The mountain dwellers didn’t risk their lives by attempting to capture them even though the reward money was substantial.

Word finally came that the brothers were back in Virginia terrorizing their neighbors near the head of Pound River. The brothers escaped detection until their own dastardly deeds brought the posse to their door. A large posse left no stone unturned looking for them, but the brothers had fled to West Virginia. They returned to the mountains near Pound in the spring of 1894 and took up hiding in a cave again. Dressed in women’s clothing, the brothers helped the family in the fields without being detected until they began lounging openly. They spent time sitting on the porch of their parent’s home and also whittled alongside the road nearby.

Soon the Flemings returned to their former ways. They mocked the lawmen who guarded the jail and streets during the trial and incarceration of Talt Hall, tying red strips of flannel to their Winchesters and parroting the lawmen’s drills. A writer of the period noted Cal and Henan had the audacity to show up to vote in the countywide election for sheriff and county judge. The sheriff gathered a posse to go after them. The police guard at Big Stone Gap was also notified. Everyone knew Cal and Henan wouldn’t give up without a fight.

The Flemings heard about the posse coming after them and took off across Black Mountain, the highest elevation in the state of Kentucky, and went back into hiding. The captain and first lieutenant of the police guard followed to find their location. He found them in a bitter confrontation with other outlaws in Kentucky. The lawmen decided to bide their time until things settled down. They surmised they may be able to catch Cal and Henan if they survived the situation they were in.

Two weeks later, operating on a tip, the posse stormed the Fleming cabin at daybreak but found only a houseful of screaming women and children. Somehow the Flemings heard about the raid and ran off an hour before. The lawmen left scouts in the area in hopes of discovering the two brother’s whereabouts. After a few days it paid off when they saw Ma Fleming carry a bag of provisions into a brushy area. She stood there tossing stones into the bushes, obviously trying to attract Cal and Henan’s attention.

When one of the rocks clinked against the Winchester rifle that was held by one of the members of the posse, the woman walked directly into their midst thinking it was her sons. The lawmen kept her so she wouldn’t warn her sons of their presence. As the posse closed in on the fugitives at dawn she burst from the posse, yelling, “Run down the holler boys! Run down the ….” The sheriff sprang forward and, with hands partially around her throat, stifled her warning.

Within minutes the Flemings were spotted in the bushes. Big Ed Hall, Gooseneck John Branham, DockSw Swindall, Granville Cox, and Clifton and Tandy Branham opened fire, forcing the two men to exchange gunfire until Henan was shot in the shoulder. It knocked the gun from his hands and shook the hat from his head. Henanfled the scene and Cal followed. Bullets from the posse whizzed by and one found its mark in Cal’s back as the brothers vanished into the brush.

The members of the posse knew both men had been hit and were losing blood. They were famished and chose to break before following the trail of blood. They relished talking about the battle and took time to collect mementos such as Henan’s hat and gun which were found under a nearby tree. Others were on their way to join them in their search. Meanwhile, the wounded Flemings paused to inspect their wounds at a cabin of a relative.

“What’ll we do,” Henan asked Cal, chomping on a biscuit despite the pain in his shoulder. “Will you be able to run for it? I can’t give up. They’ll shoot us or hang us for shor.”

“Let’s take what we can and go and hide,” Henan decided. “We’ll go to our hiding place we had as kids. They’ll never find us there. We’ll tell momma to get us some medicine from Dr. Phipp. Maybe he can help us with this pain.”

Next week: Famous author John Fox Jr. joins the pursuit. Jadon Gibson is a freelance writer from Harrogate, Tennessee. He wishes to Lincoln Memorial University, Alice Lloyd College, and the Museum of Appalachia for their assistance.