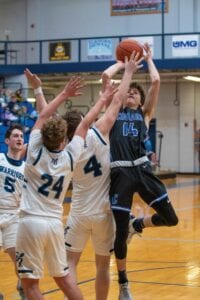 Letcher County Central junior guard Bodie Bentley runs into traffic underneath the basket in overtime, but manages to drop in two points in the Cougars’ season-opening loss to East Ridge on Monday. Bentley scored nine points in the 79-76 defeat, and led Letcher Central in scoring in overtime, with five points. The Cougars led by 17 points entering the fourth quarter, but were then outscored 28-11. Letcher Central’s Nigel Nichols led the Cougars in scoring, opening the season with a 21-point performance on the night. In action involving other local teams, the Jenkins Cavaliers fell to June Buchanan on the road Monday night, 51-45. The Cavaliers are scheduled to visit Shelby Valley on January 8, and will play Lee County at home January 11. (Photo by Chris Anderson)