‘The revitalization of Neon’ 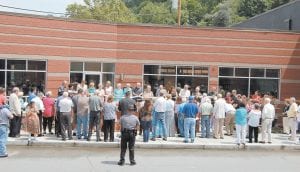 Officials hope a new library will be the start of revitalization for downtown Fleming-Neon.

“I think this is one of the steppingstones for Neon to start building back,” said Letcher County Judge/Executive Jim Ward. “I’m just really proud to see that.”

About 150 community members and local officials turned out for a ribboncutting and dedication ceremony for the Fleming-Neon Public Library on Sunday afternoon.

“I get excited when I see that library over there completed because you know what I think about? I think about this is the spark, this is the revitalization of Neon,” said State Rep. Leslie Combs.

The 5,000-square-foot brick building, which is located on Main Street, has lots of large windows and open spaces. It features a young readers’ area to encourage teenagers and young adults to visit the library. A café, which was the idea Letcher County Library Board President Jeanette Ladd, is located adjacent to the young readers’ area. 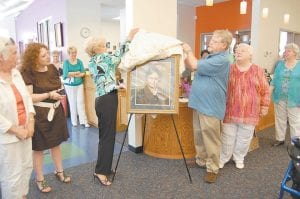 During the grand opening of the Fleming-Neon Public Library on July 21, Sally Webb Caudill, of Whitesburg, Gillie Webb, of Hazard, and Alberta G. Kummer, of Louisville, unveiled a portrait of the late Lillian Fugate Webb, the first female mayor of Fleming-Neon and a literature teacher at Fleming-Neon High School. Caudill is a sister of Webb and Kummer and Gillie Webb are two of Lillian Webb’s children. The previous library in Fleming-Neon was named after Lillian Webb in 1971. The community room of the new library is named in memory of Lillian Webb.

In addition to a children’s reading area, the new library has free wi-fi and a charging station for people to bring their own laptops. A large community room can be closed off from the rest of the library so it can be used in the evenings. Ladd said the library will serve as a meeting place for the community to gather.

“It’s a great honor to be able to design another building on Main Street Neon,” said Bill Richardson, a Whitesburg architect who designed the library. “I just think we got so lucky getting that site with three wide open walls for windows and doors. It’s very unusual that you get that downtown center anchor lot like that. It was a great vision on the part of our library board as usual and the city council.”

The building has two street-side entrances, including one near Fleming- Neon Elementary School. The main entrance faces Main Street and the backside of the building faces the school and Neon First Church of God. Windows from the Internet café face Rescue Street. “It’s a beauti- ful building,” said Fleming- Neon Mayor Susie Polis. “It has just made our city prettier.” 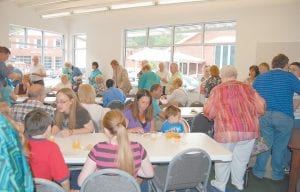 Letcher County Public Library District Board President Jeanette Ladd said the community room will be greatly used in Fleming-Neon. “They have no place to have parties or reunions,” said Ladd. “All of those windows in there makes it a pretty place to be.”

The new brick building is located where the old Hazen Department Store used to be on Main Street. The City of Fleming-Neon originally bought the Hazen building and had it demolished with plans to build a park there, but approved trading that piece of property with the library board for the previous library building.

Ladd said floors in the former Lillian Webb Memorial Library building were no longer safe for a large group of people and she and others on the library board have been trying for several years to find ways to have a new library in Fleming- Neon.

Ladd said it is frowned upon for public libraries to be named after people, so the library board named the community room in the new library in memory of the late Lillian Fugate Webb, an American literature teacher at Fleming- Neon High School and the first female mayor of Fleming Neon.

As a literature teacher, Webb required seniors to memorize and recite 30 poems.

A portrait of Webb, which was unveiled during the dedication ceremony on Sunday, will be on display at the new library.

Funding for the new $1 million project includes $100,000 in coal severance money and Ladd said the library board has been saving money for this project as well as applying for grants.

In addition to Ladd, members of the library board are Margaret Lewis, Jo Combs, Richard Smith and Carl Banks.