‘The Revolution’ is coming 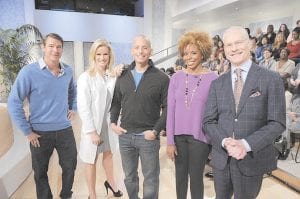 J.D. Roth’s first email upon learning that ABC had decided to air his transformational new daytime series, “The Revolution,” came from his mother-in-law: “You killed Erica Kane!”

The network had coupled its announcement of two new series last April with the more distressing news to soap opera fans that “All My Children” and “One Life to Live” would be canceled after decades on the air. Series creator Roth learned of the connection five minutes before the news went out.

His mother-in-law didn’t quite have her story right — it was the other new series, “The Chew,” that replaced “All My Children” and retired Susan Lucci’s Kane character. Similar emotion, though. Attracting attention is a challenge for all new television programs, and “The Revolution” faces the additional hurdle of impressing people in a daytime audience upset at seeing its favorite genre slowly die.

The creator of NBC’s “ The Biggest Loser” is betting on the novel idea of showing someone’s personal turnaround, condensing five months of work into five days. A trainer, a woman’s health specialist, a relationship expert, fashion maven Tim Gunn and fixer-upper Ty Pennington are all part of the work crew.

After his time with “The Biggest Loser,” Roth said he wanted to do something that was about more than weight loss.

All of the women he features on “The Revolution” have weight problems, but there are other issues that need to be addressed. Early on in the series, for example, he orders two sisters who are inseparable to spend time apart to establish their own identities. Other women featured include a hoarder, one who wants to set an example for an overweight child, one with a special needs child and another who has lost intimacy with her husband.

Each person’s story takes five months to unfold in real time, five days to be seen on the air. That sets up a complicated filming schedule. From a production standpoint, he must cater to viewers who want to follow the story every day, yet make sure that people who come across it only occasionally are not left confused.

Roth’s initial pitch came without the experts like Gunn and Pennington. ABC pushed for their inclusion because its executives wanted to be sure viewers would learn things that could help their own lives, instead of just looking in on others, said Ann Roberts, senior vice president of ABC Daytime.

“ The Revolution” may benefit from “The Chew” getting a five-month head start on ABC’s schedule.

“The Chew,” a food show, faced considerable hostility from soap opera fans when it replaced “All My Children,” said Carolyn Hinsey, author of “Afternoon Delight: Why Soaps Still Matter.” Hinsey invited some of her followers to post comments about “The Chew” on her website and got a blistering response.

The average audience for “The Chew” is 2.19 million viewers, down 7 percent from what “All My Children” was delivering the season before, the Neilsen ratings company said.

But ABC said the ratings are improving and its daytime audience is getting younger, a key factor in the change. “The Chew” and “The Revolution” are cheaper to make than soap operas, although the network won’t say how much.