The sexy co-star on NBC’s ‘Earl’ 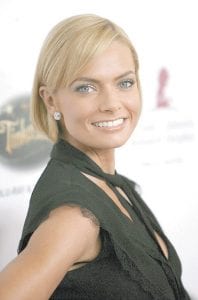 Jaime Pressly takes nothing for granted except her own tenacity.

She leaves nothing to chance when she lands a role. Borrowing from real life, “I’m gonna watch, pay attention and emulate,” she says. “The way I’m gonna get under the skin of that character is to find something to relate to — to personalize the role.”

Pressly did that three seasons ago after winning the plum role of Joy Turner on the NBC comedy “My Name Is Earl” (airing Thursday at 8 p.m. EST). Joy is the trashy, calculating bombshell of an ex-wife of Earl, the dimwitted born-again samaritan whose lottery earnings she would love to get her nail-extension claws on.

Mascara and big hair, hot pants and tank tops all are part of Joy’s repertoire. So is a feisty refusal to be messed with. To depict Joy, Pressly drew on her rural roots in Kinston, N.C., and the survival instinct they share.

“We’re both tough as nails, but softies on the inside,” says Pressly.

But that’s where the similarities end. During a recent interview, the 31-year-old Pressly’s shapely form is clad in jeans and a stylish sweater, with no BeDazzling or cleavage in sight, and no sign of Joy’s incessant gum snapping.

What does it say about Pressly, the actress, that the differences between her and the character she plays remain a source of wonder? Maybe she does her job portraying Joy too well.

“I’m not her, but no one wants to believe it,” Pressly says, “because I am from the South, and my past roles have indicated that’s all that I can be.”

Make no mistake, she loves her character, cherishes the series and voices her gratitude for having been chosen.

She is grateful, too, for the Emmy she won a year ago. When she heard her name announced, she felt years of stick-to-itiveness had been borne out.

“You know how your leg falls asleep? That’s how my whole body felt,” she says with a laugh, “and I’m telling myself, ‘You HAVE to walk up on that stage!'”

Even so, she worries that she’s trapped by an image not unlike the blond bimbo stereotype that plagued her during the years she struggled to break into acting.

She accepts some responsibility. Like Earl with his list of wrongs he aims to correct, Pressly reels off career moves that, in retrospect, may not have served her long-term interests — Maxim and Playboy pictorials, films like “Poison Ivy: The New Seduction” and “Ringmaster” — however much she needed the money and experience.

“It’s a Southern work-ethic kind of thing: I wanted to learn about everything, and the best way to do that is to work on guerilla type films,” she says. “That’s what I thought I was doing: starting from the ground up.”

She aims to keep learning from her past mistakes.

She has an upcoming film, “I Love You, Man.” The comedy was shot during her “Earl” hiatus last spring. She stars with Paul Rudd, Jon Favreau, Jason Segel, Rashida Jones and Andy Samberg. That’s a rhythm she hopes to continue: Keep reveling in “Earl” while demonstrating she can do other things.

She mentions numerous role models who took charge of careers that could have vanished in blind alleys. Like Jennifer Love Hewitt (initially famous as a virginal nymphet) and Goldie Hawn (a pixieish ditz).

And Katharine Hepburn! “She was the first actress to say, ‘I have legs, but I’m wearing pants,'” says Pressly, clearly not content to wear hot pants forever.