The Spirit of the B&O 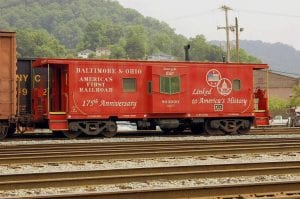 “The Spirit of the B&O”- CSXT 904000 was on the rear of a work train in Shelbiana near Pikeville, that recently laid long sections of welded rail alongside the tracks of CSX’s Kingsport Subdivision in Kentucky, Virginia, and Tennessee. The work was done in preparation of CSX’s recently completed annual 10-day maintenance blitz along the former Clinchfield railroad line extending from Elkhorn City into areas of North and South Carolina. “The Spirit of the B&O”, a bay-window caboose, wears a paint scheme like no other caboose on any railroad. It was designed and painted by volunteers in celebration of the 2003 175th anniversary of the Baltimore and Ohio railroad, the nation’s first railroad and a major component of today’s CSX system. The B&O railroad once operated track in Letcher County before selling to the Chesapeake and Ohio railroad, one of B&O’s eventual owners, in the early 20th century. (Photo by Chris Anderson)