The Stooges finally gain entry into Hall of Fame 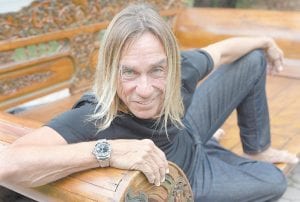 Iggy Pop was starting to feel like the Susan Lucci of rock ‘n’ roll.

Just as the veteran soap actress believed she might never win a Daytime Emmy, the godfather of punk was certain his groundbreaking band The Stooges wouldn’t ever earn a spot in the Rock and Roll Hall of Fame.

Well, as it turns out, Lucci got her gold statue on the 19th try. And Iggy and the boys finally got their shot to search and destroy at Monday night’s induction ceremony, on their eighth attempt.

“At least I won’t be nominated anymore,” Pop said, laughing.

He believed The Stooges never would get into the Rock Hall “right up until the day before somebody called me.”

“I kept telling the guys over and over: ‘We’re not gonna get in, guys.’ Yeah. I was absolutely sure of that,” Pop said in an interview.

It’s hard to say exactly what turned the tide in voter sentiment, but Pop points to three possibilities: the band’s long streak of Rock Hall futility, the January 2009 death of founding member Ron Asheton and … Madonna.

The Stooges honored their fellow Michigan native by performing rocking versions of two of her hits — “Burning Up” and “Ray of Light” — on the night of the 2008 Rock and Roll Hall of Fame induction ceremony.

Pop says the gig helped provide some much-needed exposure for a band that wasn’t really heard from for 30 years — the result of numerous band breakups and lineup changes that current members blame on drugs and fights over money.

“I thought, ‘Well, some of the people there will see that we don’t have horns. We’re not gonna breathe fire on the tables or anything,’” he said. “I knew the thing would be televised, and 15 to 20 percent of the viewers wouldn’t be able to diff erentiate. If they see you on TV, they’ll think you’ve been inducted anyway.”

Whatever the reason, the guys were on stage at New York’s Waldorf Astoria Hotel, but this time they performed their own tunes.

They selected “I Wanna Be Your Dog” and “Search and Destroy,” two songs Stooges guitarist James Williamson says are “the most representative” of the band’s work.

The latter was on the 1973 album “Raw Power,” which rates No. 125 on Rolling Stone’s list of the 500 greatest albums of all time. The magazine called it a “protopunk rock classic” that featured a certain “hellbent ferocity.”

Fans love and critics appreciate “Search and Destroy” for its searing guitar riff and signature Iggy Pop lyrics. It kicks off with the singer’s guttural snarl: “I’m a street-walkin’ cheetah with a heart full of napalm.”

The song also served as the soundtrack for a Nike ad that memorably featured athletes bleeding and vomiting during competition. The song more recently popped up in an episode of ABC’s “Lost” — it was blasted through a record player while a distraught Sawyer (Josh Holloway) drowned his sorrows following the death of his girlfriend.

Pop, whose solo effort “Lust For Life” also has enjoyed a second life in movies and commercials, sees the usage as an alternate means of exposing people to the music.

“(The Stooges) didn’t get the radio airplay,” he said. “We were shut out of the goodies of the industry.”

When he hears “Search and Destroy” and other songs from the “Raw Power” era, Pop says the music doesn’t sound dated to him.

“Every usage again and again I notice that, and I also notice that the stuff always sounds kind of rippin’,” he said of the album, which is being re-released next month.

Back on lead vocals is the inimitable Pop, who Williamson says simply is “one of the best there ever was.”

“The thing that Iggy did that was all his own was to confront the audience — not just act out on stage like a Mick Jagger does or something like that — but Iggy got in your face,” the guitarist said. “He got out in the audience and was right there with you. And nobody else had ever done that before. He was fearless about that.”

Williamson remembers one show in which Pop egged on the wrong guy — a biker — and got punched in the face.

“I think that was a turning point for the band,” Williamson said. “That was pretty much the beginning of the end.”

Pop went on to a successful solo career, the Ashetons joined other bands and Williamson spent the past 30 years in the business world.

But Ron Asheton’s death and the Rock Hall induction have brought them back together, more than 40 years since they exploded out of Ann Arbor, Mich., with a unique, primal sound that paved the way for the punk, grunge and garage rock movements that sprang up in their wake.

Pop says he and Williamson have been kicking around song ideas, and he’s also looking over some demos the Asheton brothers recorded prior to Ron’s death.

“We’re just kind of seeing where that goes — whether we’ll sneak out a single on the Internet or an EP or try to make a whole album. We’re not sure,” Pop said.

Before all of that gets going, though, the guys will be introduced by Billie Joe Armstrong of Green Day and enter the Rock Hall alongside fellow inductees ABBA, Genesis, Jimmy Cliff and The Hollies.

“I am the world’s forgotten boy,” Pop screeches in “Search and Destroy.”