The story behind Rin Tin Tin 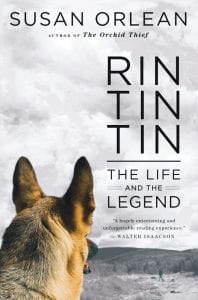 Simon and Schuster is the publisher of “Rin Tin Tin: The Life and the Legend,” by Susan Orlean.

“Rin Tin Tin: The Life and the Legend” (Simon & Schuster), by Susan Orlean:

Lee Duncan’s great unrealized ambition was a movie based on his unlikely life with his canine pal Rin Tin Tin. He had to settle instead for the financial rewards that came from creating a cultural phenomenon.

The ups and downs of Duncan’s life — and the German shepherd’s Hollywood career — provide the spine of Susan Orlean’s engrossing and delightful book, “Rin Tin Tin: The Life and the Legend.” Its heart lies in her exploration of how a dog could come to embody the ideal of heroic devotion and, eventually, exist as an icon outside the boundaries of time.

Duncan grew up fatherless in California and spent three years at an orphanage while his mother sorted out her life. Not until he was living on his grandfather’s ranch did he have a dog and the companionship he craved — only to be forced to give up his little terrier when the family moved. Unlike the plot of a typical “Rin Tin Tin” script, the boy and his dog never reunited.

A soldier in France during World War I, Duncan came across a wrecked kennel. Amid the dead dogs were five German shepherd puppies. He kept two, naming them Nanette and Rin Tin Tin after good-luck figurines of the day, and managed to get them back to the U.S. Nanette died soon after, and Duncan began training “Rinty” at his home in Los Angeles.

The breed was relatively new, developed in Germany in 1899, and its fierce, contemplative countenance and athletic abilities made it perfect for the movies. Rin Tin Tin became America’s favorite movie star, on four legs or two, after 1923’s “Where the North Begins.” The incredible success of his films in the silent era gave the fledgling Warner Bros. studio a firm footing in the industry.

A generation later, Duncan turned to television to introduce Rin Tin Tin to baby boomers. A star was reborn. The bloodline was a bit murky by then and more than one dog was needed for the weekly series and public events. As Orlean notes, it was the idea behind Rin Tin Tin — heroism and devotion — that really mattered.

Orlean finds much more to the story than a man and his dog: good fortune and bad luck, money made and lost, egos built up and torn down, families united and broken, people loved and unloved, and lots and lots of litigation.

Through it all, Rin Tin Tin abides.