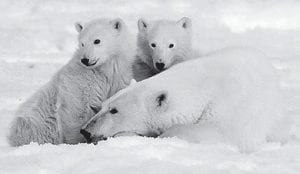 A polar bear and her two cubs. (AP Photo)

Is everything spinning out of control?

Horatio Alger – twist in your grave.

The can-do, bootstrap approach embedded in the American psyche is under assault. Eroding it is a dour powerlessness that’s chipping away at America’s sturdy conviction that destiny can be commanded with sheer courage and perseverance.

The sense of helplessness is even reflected in this year’s presidential election, as each contender offers a sense of order – and hope. John McCain promises an experienced hand in a frightening time. Barack Obama promises bright and shiny change – and his swollen crowds believe his exhortation, “Yes, we can.”

Even so, a battered public seems discouraged by the onslaught of dispiriting things. A new Associated Press-Ipsos poll says a barrel-scraping 17 percent believe the country is moving in the right direction, the lowest reading since the survey began in 2003.

A new ABC News-Washington Post survey put that figure at 14 percent, tying a record low in more than three decades of taking soundings on the national mood.

“It is pretty scary,” said Charles Truxal, 64, a retired corporate manager in Rochester, Minn. “People are thinking things are going to get better, and they haven’t been. And then you go hide in your basement because tornadoes are coming through. If you think about things, you have very little power to make it change.”

Abroad, the recent natural disasters dwarf anything afflicting the U.S.: more than 69,000 people dead in the China earthquake, 78,000 dead and 56,000 missing from the Myanmar cyclone.

Americans need do no more than check the weather, look in their wallets or turn on the news for their daily reality check on a world gone haywire.

Floods engulf Midwestern river towns, washing away livelihoods and communities. Was it global warming, the gradual degradation of an entire planet’s weather that man seems powerless to stop, or just a freakish latespring deluge?

It hardly matters to those in the path. Just ask the people of New Orleans who survived the horrific Hurricane Katrina and now live in a major American city where 1,000 days later, entire neighborhoods remain abandoned, a national embarrassment that evokes disbelief from visitors.

Food is becoming scarcer and more expensive on a worldwide scale, due to increased consumption in growing countries like China and India and rising fuel costs. That can-do solution to energy needs – turning corn into fuel – is sapping fields of plenty once devoted to crops that people need to eat. Shortages have sparked riots in countries dotting the globe. In the U.S., rice prices tripled and some stores rationed the staple.

Residents of the nation’s capital and its suburbs repeatedly lose power for extended periods as mere thunderstorms – not earthquakes or terrorist bombings – rumble through. In California, leaders warn people to use less water in the unrelenting drought.

Want to get away from it all? The weak U.S. dollar makes travel abroad forbiddingly expensive. To add insult to injury, some airlines now charge to check luggage.

Want to escape on the couch? A writers’ strike halted favorite TV shows for half a season. Video stores are falling by the wayside as people get their movies online or in the mail.

The moorings seem to be coming loose here, too.

Barry Bonds and Roger Clemens stand accused of enhancing their heroics with drugs. Basketball referees are suspected of cheating.

Stay tuned for less than pristine tales from the drug-addled Tour de France and who knows what from the Summer Olympics.

It’s not the first time Americans have felt a loss of control.

Alger, the dime-novel author whose heroes overcame adversity to gain riches and fame, played to similar anxieties when the U.S. was becoming an industrial society in the late 1800s.

American University historian Allan J. Lichtman notes that the U.S. has endured comparable periods and worse, including the economic stagflation and Iran hostage crisis of 1980; the dawn of the Cold War, the Korean War and the hysterical hunts for domestic Communists in the late 1940s and early 1950s; and the Depression of the 1930s.

“All those periods were followed by much more optimistic periods in which the American people had their confidence restored,” he said. “Of course, that doesn’t mean it will happen again.”

Each period was also followed by a change in the party controlling the White House.

This period has seen intense interest in the presidential primaries, especially the Democrats’ five-month duel between Obama and Hillary Rodham Clinton. Records were shattered by voters showing up at polling places, yearning for a voice in who will next guide the country as it confronts the uncontrollable.

Never mind that their views of their current leaders are near rock bottom, reflecting a frustration with Washington’s inability to solve anything. President Bush barely gets the approval of three in 10 people, and it’s even worse for the Democratic-led Congress.

Why the vulnerability? After all, this is the 21st century, not a more primitive past when little in life was assured. Surely people know how to fix problems now.

Maybe. And maybe this is what the 21st Century will be about – a great unraveling of some things long taken for granted.