The truth about Chardon, O. 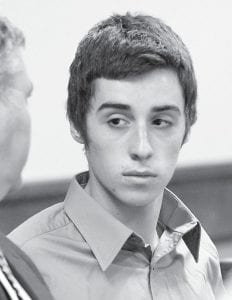 T.J. Lane looked at his attorney during a juvenile court hearing March 6 in Chardon, Ohio. Lane is charged with three counts of aggravated murder in the killings of students Demetrius Hewlin, Russell King Jr. and Daniel Parmertor. (AP Photo)

Before last week, most of the country never had heard of Chardon, Ohio.

Now millions know it as home to the deadliest school shooting in seven years.

There is no escaping this tragic narrative, but it does not come close to telling the whole story of this close-knit community. In that way, Chardon is like every small town we never have heard of until something too horrible for words swallows it whole.

No matter where you live in America, you likely know that on Feb. 27, a troubled boy walked into the cafeteria of Chardon High School and opened fire, killing three students and injuring two others.

You may know that thousands of people showed up for a memorial service the next evening, bearing candles and prayers and a fear of what comes next, and that one of the teenage victims has indicated on his driver’s license that should he die, he wants to donate his organs.

You also may know that 17-year-old T.J. Lane surrendered to police within an hour of the shootings and confessed to the crime. You probably have learned that he told police the shootings were random and that he didn’t know the students he killed. Perhaps you heard that he was a quiet boy, a loner, whose parents had been locked in a cycle of domestic violence and that he recently was living with grandparents.

It is clichéd to say Chardon was a town full of parents who thought that such a crime never could happen there. No matter where we live, we want to believe — we need to believe — that we’ve carved out an exception to life’s randomness. How else could a parent get out of bed every morning?

Chardon is about a half-hour east of Cleveland, where I’ve worked nearly all of my adult life. When I first started writing for The Plain Dealer newspaper in the early 1990s, I was assigned to cover Chardon as part of my beat. What a constant loop of colorful stories in this Snowbelt town, where one of the traditions is to welcome spring, regardless of weather, with log-chopping contests and bathtub races in the town square.

It’s hard to be a stranger in Chardon, as a resident or as a visitor. People either recognize you or want to know why you’re there. In my experience, this is always a friendly inquisition, and I often drive away feeling envious of this community that has refused to surrender to a harsher version of American life.

If you love a school-age child, you probably have been thinking a lot about the shootings in Chardon. In that way, you have a lot in common with all of us here in Ohio. Tragedies sure have a way of closing the distance.

Russ Goodwin, a Cleveland counselor who specializes in treating adolescents and young adults, told me Tuesday that he is getting a lot of calls from parents wanting to know how to talk to their children about what happened. His advice: Listen now, and lecture later.

“When parents get afraid, they lecture, but that makes kids shut down,” Goodwin said. “This is a golden opportunity of communication. Talk to your children. Not at the dinner table or in an office. Do it while you’re driving in the car or in the kitchen preparing dinner. Ask your children, ‘When you saw this news, how did it affect you?’”

Goodwin said it’s too soon to speculate about why T.J. Lane shot those students. “We don’t know enough yet,” he said. “Those kids could have done absolutely nothing to bring this on.”

That single truth is as frightening for parents as it is for our kids.

“It’s OK to admit we’re scared, too,” Goodwin said, “but we need to keep our reactions in check. Our kids are already feeling defenseless.”

Nowhere is that truer in this moment than it is in Chardon.

In 1994, I interviewed a group of New Zealanders visiting the town. They went on and on about how friendly the townspeople were, how willingly they shared stories about their beloved town.

Right now, it’s a town full of Americans whose hearts are breaking.

They’re taking care of one another, and together they will heal.

That, too, is a Chardon tradition.