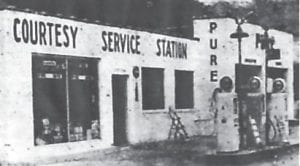 This photograph of the Courtesy Service Station appeared in the April 9, 1953 issue of The Mountain Eagle. Hubert Hall and Billy Wayne Wright were operating the station, located behind the Elinda Ann Drive-Inn Theatre. The station was open from 7 a.m. to 10 p.m., and contained the only Wash- Mobile in the county.

Basil Hall of Blackey has purchased Kermit’s Super Market from Kermit Combs of Whitesburg, who has operated the store for the past 23 years. Hall has worked at the store “off and on” for about 20 years. He said the store will be known as Hall’s Super Market.

A subcommittee of the Interior Committee of the U.S. Senate will hold hearings on legislation to create a 500-mile Allegheny Parkway from Maryland through West Virginia and into Kentucky. U.S. Senators John Sherman Cooper and Thruston B. Morton of Kentucky say the suggested routing of the parkway in Kentucky would include the Breaks Interstate Park at Elkhorn City and Pine Mountain State Park at Pineville. They say the road would run “along the crest of Pine Mountain.” Presumably the routing would carry the parkway right through Letcher County at the top of Pine Mountain. The road is expected to cost a total of $500 million.

Dr. B.C. Bach and Dr. Carl Pigman, Whitesburg physicians, have moved their offices in the Bank of Whitesburg building across Main Street to a building owned by Dennis Tolliver.

Kentucky Supt. of Public Instruction Lyman Ginger told members of the Blackey community that “the maintenance of a separate elementary center at Blackey does not appear to be a practical solution at this time.” The Blackey Elementary School was destroyed by fire in March. Ginger said the students would be taken over by the Letcher and Campbell’s Branch elementary schools. He said building priorities lie elsewhere in the county.

Sixteen delegates to the state Democratic Party convention were elected at a county convention in the Letcher County courthouse. Democratic County Chairman Jesse Bates presided at the meeting, which drew one of the biggest crowds attending such gatherings in many years. The circuit courtroom was filled and people were standing outside in the corridor.

A federal judge overturned the 1969 re-election of W.A. ‘Tony’ Boyle as national president of the United Mine Workers of America. He ruled that Boyle and his supporters were guilty of massive violations of federal laws governing union elections.

About 150 of the 524 miners at Blue Diamond Coal Co.’s Scotia Mine have been laid off beginning Monday for an indefinite period. Company officials blame the layoffs on a “soft market” for coal and say they do not know when miners might be called back to work.

The Whitesburg Pizza Hut is celebrating its first anniversary.

Letcher Fiscal Court took steps to advertise for bids for a fire escape for the Letcher County Jail, which is housed on the third floor of the courthouse. Whitesburg Fire Chief Philmore Bowen told the court the fire escape is a step in the right direction but cautioned that much more work is needed before the building will be safe. He said until vents on the courthouse roof are opened up, the district and circuit courtrooms and the library will be without air conditioning. He also said the courthouse sewage system is not vented and is likely to cause a methane gas explosion in a crawl space at the top of the building.

A mining group says 1992 could be a near-record year for the United State coal industry.

Eagle correspondent Hassie Breeding of Jeremiah recalled all the bridges that used to span Rockhouse Creek from Blackey to Isom.

The Letcher Fiscal Court is considering shipping Letcher County garbage out of the county for disposal rather than trying to extend the life of the landfill at Millstone.

Members of Kentuckians for the Commonwealth will gather at McRoberts on Thursday to protest a decision by the Bush administration that they say will allow coal companies to bury hundreds of miles of waterways under valley fills.

The Letcher County Board of Education has voted to condemn the property of at least four persons in order to build a new high school at Ermine.

High winds knocked down hundreds of trees and crushed houses at Millstone, nickel-sized hail pounded Fleming-Neon, and floodwater rose into the roads at Whitesburg and McRoberts during storms Thursday.

Unemployment rates rose slightly during March in the Kentucky River Area Development District but were still lower than they were in March 2001. State figures show that Letcher County had a 6.8 percent jobless rate in March, up from 6.0 percent in February but less than the 7.5 percent rate of March, 2001.