The Mountain Parkway, the first four-lane divided highway to penetrate the eastern Kentucky mountains, is scheduled to be opened to traffic January 14. The section is 43 miles long and will be a toll road with two toll plazas between Campton and Winchester.

Radio Station WTCW of Whitesburg says it will increase its power from 1000 watts to 5000 watts soon. The station went on the air 10 years ago.

Kerney Day of Cowan has been elected chairman of the Letcher County Board of Education, succeeding Dr. B.F. Wright.

Classes were dismissed at Whitesburg schools in respect to Walter Enlow, a Letcher County schoolteacher for 30 years who died this week.

Because of demand, Whitesburg High School is offering an additional class in driving for adults.

Whitesburg city officials announced a ban on parking on the railroad tracks on Railroad Street in the city. They said the L&N Railroad has been experiencing delays with its trains because people were parking their cars on the tracks. 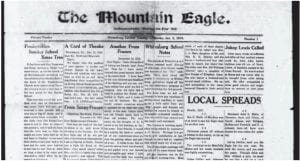 On November 11, 1918, the armistice between the Allies and Germany was signed, bringing an end to World War I, which began on July 28, 1914. In the days after the ‘Great War’ ended, Letcher County soldiers who had been sent to Europe to fight for the Allies used The Mountain Eagle to notify their friends and families they were okay. Two such letters appeared on the front page of the January 2, 1919 edition. One was written by Arlie Boggs, who went on to become superintendent of the Letcher County Schools.

An elderly woman collapsed and died in Whitesburg Monday as she waited in freezing weather outside the local welfare office to sign up for assistance with her heating bill. Mrs. Vina Caudill Watts, 76, Hallie, collapsed as she and other Letcher County residents stood in line for help under a first come-first serve program to provide payments of $150 to $300 for heating bills of low-income families.

Letcher County’s job outlook brightened somewhat this week as employees of at least one major coal company returned to work. The Elkhorn Division of Bethlehem Steel resumed operations on January 3 after being idle for more than a month.

The Letcher County Food Pantry says it needs donations of money rather than food to meet the needs of families who are without work. Applications have been running about four a day in recent weeks, up from about one a day over the previous eight months. There have been 25 or 30 in the past two days. 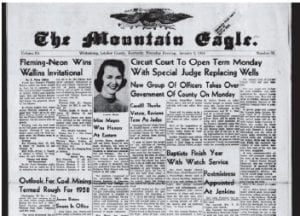 When it comes to the coal industry and our economy, Letcher County residents shared many of the same fears 55 years ago that they do today. The story below appeared on the front of the January 2, 1958 edition under the headline ‘Outlook for Coal Mining Termed Rough for 1958.’

Two miners died in a roof fall in a mine where they were working at Linefork. Michael R. Burns, 29, of Isom, and David W. Maggard, 32, of Viper, died about 2 a.m. at South East Coal Company’s No. 405 mine. Maggard was a scoop operator and Burns was a roof bolter helper. South East vice president Steve LaViers said the men were pulling pillars of coal left behind to support the mine roof, but the fall did not occur at the mine face. Burns, who had worked for South East since high school with time out for military service, was survived by his wife, three children and other relatives. Maggard, who had worked for South East for 11 years, was not married and had no children.

Letcher Fiscal Court started the new year with more debate over the deep cuts needed in the county budget. Judge/Executive Ruben Watts listed an estimated $190,000 shortfall in coal severance tax receipts and said the county was out another $250,000 in garbage disposal costs. He also expected a shortfall of some $50,000 to $60,000 in road and bridge funds.

Police say a burglary in Whitesburg is disturbing not because of where it occurred but because of what the thief tried to steal. Whitesburg Police Chief Paul Miles said a burglar was apparently after a “date rape” drug when he broke a window out of the Animal Health Service veterinary clinic on Jenkins Road.

The private company that runs Whitesburg’s water and sewer systems is threatening to terminate its contract next week unless the city pays $68,478.06 the city owes.

The first boy and girl born in Letcher County in 2003 were Jordan Kyler Thomas and Makayla Lashay Johnson.

County officials say they will take Equitable Production before a grand jury after the firm hired contractors to bore a hole under a county road to install a pipeline without obtaining a permit.

Dear Eagle: I take this method of letting my friends hear from me.

Thus far I have safely crossed the great barrier, known as the battlefield. I have been in the very thickest and deadliest of the fighting and you can perhaps realize how good we feel in knowing that we have had a hand in putting the Kaiser and hordes to flight and it looks to me out of business.

We can hardly contain ourselves when it appears to us that we can surely in the near future meet our old friends again back in dear old Letcher. The very name, oh, the thought of it, is sweet to us, but Letcher [is] so far, far away.

Dear friends, it would be a mighty big book to contain all of our experiences since we took the parting salute and sailed away. It looks to me like an awfully strong hand has directed us and guided us in our travels and struggles, and when I look back over the past two months I can hardly realize I am what I am.

Let us thank God and the hand that He directed that the war is over. I must close, but before doing so, let me bespeak for you a merry Christmas and a happy New Year.

“I’m afraid the coal industry is in for some rather rough sledding during the first half of 1958,” David Francis, president of Princess Coal Sales Company, said this week. “ The trend downward has already begun,” Francis said, “because production for the last quarter of this year is off 10 percent compared with the same quarter of 1956.

“I may sound gloomy, but with steel and Europe off on their buying and a warm winter in the offing, the 150,000,000 tons produced in 1957 in District 7 and 8 of our area may drop by 15,000,000 tons. “The two districts are in Southern West Virginia, Eastern Kentucky and Southeastern Virginia.

“Most of this decrease may occur in the first six months of 1958, but we should be readjusted by midsummer after the Great Lakes shipping has opened up.”

Although forecasting a decrease in production, Francis said he thought the coal industry would recoup its losses before long.