Bus drivers on the line extending from Hazard to Jenkins and from Jenkins to Paintsville have been on strike since last Friday. According to information reaching The Eagle, the strike was called because of the hiring of a non-union “lady employee” at Paintsville. The strike combined with bad weather is causing a hardship in many instances, especially in the teaching profession.

Service stations in Letcher County and elsewhere in the United States may stay open not more than 72 hours a week, and not more than 12 hours a day, the Office of the Petroleum Administrator has ordered.

Mr. and Mrs. B.J. Fletcher of McRoberts have been informed by the War Department of the death of their son, Army Sergeant Jesse L. Fletcher, 31, who was killed in action in World War II. The message said Sergeant Fletcher “was killed in defense of his country on December 3 in Northwest Africa.” 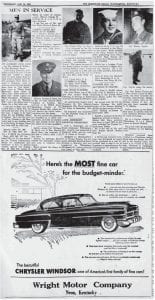 When the January 29, 1953 issue of The Eagle went to press, the Korean War had been going on for more than 2-1/2 years. It would still be six months before the final armistice was signed on July 27, 1953, after 33,686 U.S. soldiers had been killed and an additional 8,167 were missing in action. Seen below is the image of a portion of Page 3 of that edition of the paper, which included reportson a few of the many Letcher County residents who had been called to action to help stop communist North Korea’s invasion into democratic South Korea.

Mrs. Charles Adams writes in her column “Pine Creek News” writes that, “everybody seems to be enjoying the snow now as we haven’t had very much this winter. It’s keeping John H. Craft and Alfred Morris busy hauling coal day and night to keep everybody supplied.”

In her column “Eolia News,” Hazel Boggs writes that “farmers around Eolia have been making trips to Whitesburg to obtain phosphate, getting ready for their early spring crops.”

U.S. Air Force Colonel Klair E. Back of Whitesburg has received the Bronze Star Medal, the fourth-highest combat decoration, for “meritorious service while serving as Commanding Officer, Third Air Rescue Squadron.” Colonel Back’s organization is credited with saving the lives of more than 8,200 United Nations servicemen in the Korean Confl ict. Back also wears the Legion of Merit and the Air Medal.

Two men are admitted to the Seco hospital after a RC Cola truck collides with a Kerney Day Grocery truck two miles west of Whitesburg on KY 15. Both are released from the hospital after a short stay.

Railroad Commissioner Pleaz Mobley conducted a hearing on Wednesday, January 28, on the petition of the L&N Railroad to discontinue passenger trains No. 3 and No. 4 running between Hazard and Fleming. More than 50 Letcher County citizens attended the daylong hearing in the Letcher County Courthouse. Final disposition of the case is set for February 11 in Frankfort.

The Letcher County Health Department reports the following number of live births, still births and deaths in the county during the calendar year 1952. Live births, 1,008; still births, 25; other deaths, 229.

Seventy-eight foremen of the Consolidation Coal Company, Jenkins, received awards at Boiling Springs Country Club, Lexington, for achieving during 1952 the best safety record in the history of the company.

The Jenkins Theatre is offering a double feature on Thursday and Friday, January 29 and 30. George Montgomery stars in “Cripple Creek” in the first feature. The finale is “Paula,” starring Loretta Young.

The top tune as reported in the “Hillbilly Hit Parade” column sent to The Eagle from WCKY-AM in Cincinnati is “Jambalaya” by Hank Williams.

Forester Ted Parten calls a yellow poplar cut on Black Mountain “the last of the big boys” in Letcher County. The tree was seven feet in diameter and contained 11,000 board feet of lumber — enough to build a five-room house.

Dexter Dixon of Blackey and Mrs. Archie Craft of Whitesburg have been named the county chairman and county chairwoman in Ned Breathitt’s campaign for the Democratic nomination for governor. Headquarters for A.B. ‘Happy’ Chandler, Breathitt’s chief opponent, says Hassel Stamper will be his chairman, assisted by Robert Collins and Jesse Bates.

Funeral services were held for Stephen L. Blair of Thornton. Blair practiced law in Whitesburg for many years with Atty. French Hawk. Among his survivors is his wife, Ollie Franklin Blair, whom he married in 1908.

Material for construction of a new bridge on Kentucky 7 at Twinbridges near Blackey is being moved in by state highway department road crews. The bridge collapsed under the weight of an overloaded coal truck.

A County Police Force was created at a special meeting of the Letcher County Fiscal Court. Charles Hall of Neon and Hemphill, and Lawson Sumpter Jr. of Kingscreek, have been hired as the first two officers. The fiscal court said the force would “augment the sheriff ’s department,” adding that “additional help” is necessary to curb crime, particularly at night. Robbery prevention is to be a main duty of the new police.

Twenty-nine Kentucky miners, including four from Letcher County, were killed in the state’s coal mines in 1972. Of the 29, 26 died in underground mines, three on strip mines.

Charles Ann Mullis advises people cleaning off their gardens not to set the woods on fire.

The Letcher County School Board voted to acquire the industrial property in West Whitesburg for the new Whitesburg High School. The school board said it is prepared to condemn the property if necessary. The property is located just beyond the second railroad crossing on KY 15 west of Whitesburg.

An editorial in The Mountain Eagle calls the Letcher County School Board decision to take over the industrial site an “ill-considered action.” The editorial says, “No one can dispute that there is a critical need for new classrooms,” but goes on to cite the county’s high unemployment rate and the need for the Whitesburg industrial site, the only developed site for industry in the entire Kentucky River Valley.