50 years ago this week, Letcher County suffered the most damaging flood in the county’s history. Here are some images of that March 11-12, 1963 flood as they appeared in the March 14, 1963 edition of The Mountain Eagle.

Beginning April 1, Letcher County’s mail service “will be put on the train” from Hazard to McRoberts. “While it will not, if the present railroad situation remains in effect, give us mail any quicker than we already get it, it will save the wear and tear of many a poor old mule and horse,” a Mountain Eagle story announcing the change says.

The Mineral Fuel Company of Fairmont, W.Va., has purchased between 4,500 and 5,000 acres of coal land in Letcher County and is planning an expenditure of from $500,000 to $700,000 for operating mines, constructing plants, installing machinery, and building houses for a modern coal operation with an annual output of 750,000 tons of coal. The property adjoins the 100,000 acres the Consolidation Coal Company of Fairmont and Baltimore, Maryland is developing.

The dam at Elkhorn Lake, Jenkins, is now filled with water as a result of recent heavy rains. Also in Jenkins, a portion of one of the Consolidation Coal supply houses has been set aside for a hose house where the new hose wagon will be kept. Fire volunteers will report there first, and then help haul the hose to the fire. 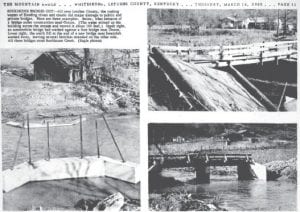 “You can measure the intelligence and worth of every neighborhood in Letcher (County) by the number of books, magazines and newspapers it reads,” Mountain Eagle editor Nehemiah M. Webb writes in an editorial. “A reading neighborhood is an intelligent, peaceful and lawabiding neighborhood. … There are big neighborhoods in Letcher County where almost every home is a subscriber to The Eagle. … In these neighborhoods you never hear of a drunken row, a murder or a vicious crime of any sort.” 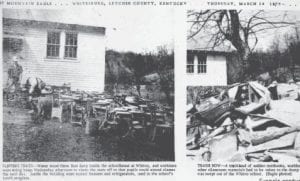 A new post office has been established at Kona.

A “local nest” of the Order of Owls fraternal and social order is now being established in Whitesburg.

The Consolidation Coal Company is advertising clearance sales to make room for spring merchandise at the five stores it operates in Letcher County — at Burdine, No. 203, Jenkins, No. 207 and McRoberts.

The Kentucky Distillers Association warns Letcher County residents who are thinking of voting to outlaw the legal sale of alcohol, “You’re really only voting to have liquor brought in illegally from the outside.” By ending controlled alcohol sales, the advertisement says, “We’d get bootleggers and crooks, poison liquor and corruption.”

Sergent residents Wilson Kiser, Ulis Hunsucker, Clarence King and Perry Ashbrook are the new recruits to line up with Uncle Sam during the past 10 days, according to the column “Sergent News.”

The Jenkins Cavaliers defeated the Fleming Pirates, 44- 31, in the final game of the district basketball tournament held at Fleming. Three Jenkins players — Jack Prunty, Harold Hibbitts and Walter Wright — were named to the all-district tournament team.

Funeral services were held in Jenkins for Charlie McCoy, a former Jenkins police officer, who was killed when he fell from a coal tipple where he was working in Omar, W.Va.

In a letter to the editor signed by soldier writing from “Somewhere in England,” the soldier criticizes organizations such as the one in Letcher County that has joined efforts nationwide to outlaw the sale of legal alcohol. “From the highest to lowest, the American soldiers are disgusted and dismayed that, during their absence, prohibitionists are using infiltration tactics to restore the equivalent of the Eighteenth Amendment.”

One of the strangest seasons in the history of collegiate sports has come to a close on the University of Kentucky campus. Coach Adolph Rupp’s UK Wildcats, who were suspended from competition this season by the unprecedented action of the NCAA, substituted a unique intramural series for their usually power-packed 30-game schedule and opened four intrasquad scrimmage games to the public without charge for admission. The games drew 35,000 spectators. As one fan put it, “Where else can you see the two best teams in America battle it out, and for free?”

U.S. Rep. Carl D. Perkins has called for Congressional hearings on “residual fuel oil importations” that Perkins says are causing great harm to eastern Kentucky’s coal industry. Residual fuel is the oil shipped into the U.S. and dumped onto the home and industrial heating oil market for cheap prices after the gasoline has been extracted from the crude oil. “We can readily see the impact that these importations are having on our coal industry and throwing the miners out of employment,” Perkins, of Hindman, said on the House floor.

Kerney Day and Ray Collins, the original winners in the Letcher County Board of Education race in November, were declared the winners again in a recount held in the Letcher Circuit Courtroom. The original count gave both men leads of 15 votes. The recount showed Collins with a nine-vote margin of victory and Day with a 12-vote margin.

Letcher Circuit Judge Courtney C. Wells announced he has appointed James M. Caudill of Neon as the new receiver for The Elk Horn Coal Corporation, which has been in the hands of receivers for many years. The announcement comes as a surprise to many since Mr. Caudill had announced recently that he would be a Democratic candidate for Letcher County Judge. Caudill said he would no longer be a candidate for judge if his appointment were confirmed.

Joseph Stalin, Premier of the Soviet Union, was buried Monday beside the grave of Lenin in Moscow. Stalin died last Thursday morning of a brain hemorrhage.

Twelve-year-old Josephine Caudill, an eighth-grade student at Stuart Robinson School, is the winner of the Letcher County Spelling Bee held at Whitesburg Grade School. She won a $5 local prize and a $10 prize from the Louisville Courier-Journal.

Priscilla Ann Durham, 5, of Burdine, is Kentucky’s Easter Seal Girl for 1953. She is the daughter of Otis and Helen Durham of Burdine.

Sealed bids will be received until April 1 for 70 square feet of advertising space available at the Whitesburg Football Field, the Whitesburg Athletic Association has announced.

Pure Oil Company has won a court judgment ordering the sale at public auction of a Pure service station in Whitesburg whose owner owes the parent company $318.64.

The Fleming-Neon Pirates were crowned champions of the 53rd District Saturday night after defeating the Whitesburg Yellowjackets, 67-63. Fleming-Neon advances to the 14th Regional tournament to play Leslie County. Whitesburg will play Hindman in the regional tourney.

Letcher County is digging out of the mud left by the worst flood in the area’s history. The Kentucky River crested in Whitesburg at about 18 inches below the record set in 1957, but elsewhere in the county the river often exceeded its 1957 depth. The areas around Blackey, Jeremiah, Linefork and Kingdom Come were especially hard hit. Water ran five-feet deep in the streets of Neon.

An editorial in The Mountain Eagle says, “We must have flood control. And in the process of controlling these floodwaters we must provide an electrical power generating complex that uses our water and coal resources to provide the area with an abundance of cheap electricity . . . This would bring stability to the coal industry, and with floodfree industrial sites and cheap power, industrialization and an accompanying end to economic ills would follow as night follows day.”

The Letcher County Board of Education has voted to award contracts next month for a new elementary school on Cowan and an addition to the Eolia school. Board Member Ray Collins said he was for the Cowan school but objected to the board’s building a lunchroom and multi-purpose room at Eolia when Whitesburg grade school and high school are in worse need of buildings.

Jeremiah correspondent Hassie Breeding reports that a log house built more than a century ago has been purchased and is to be erected on stage at “The Little Shepherd” drama.

The Concerned Citizens of Cowan have put up markers at all public cemeteries on Cowan and Kingscreek, and have started an Ecology Club at Whitesburg High School. A club member, Michael Shepherd, asked that each person do his part to clean up the environment.

The Whitesburg Yellowjackets fell 84-71 to Hindman in the regional basketball tournament.

Two Whitesburg High School students and Whiteburg’s assistant fire chief were killed in a traffic accident while returning home from a regional tournament basketball game in Jackson. Alan Wayne Day and Matthew Walter Howard, both 16, and Mark Thomas Witt, 34, died as the result of a three-vehicle collision on KY 15, 2.7 miles south of Lost Creek in Breathitt County. Five other people were injured in the accident.

A total of 4.11 inches of rain fell in Whitesburg last month, according to a report from County Extension Agent Paul Morris. Morris said the average air temperature for February was 39.5 degrees, and the average temperature was 35 degrees.

The “storm of the century” which struck Letcher County has left two people dead and the rest of the county contending with nearly 30 inches of snow and 10-below temperatures. J.P. Craft, 64, was found dead in his home after walking home from his nephew’s house in the blizzard. An Eolia man, Bertley Boggs, 53, was found dead lying in Smith’s Creek under about a foot of ice. He had a history of heart trouble and had been missing for a couple of days.

Biologists from two federal agencies are in Letcher County after a reported sighting of an endangered eastern cougar. A U.S. Fish and Wildlife Service biologist says there has been no confirmed eastern cougar sighting in about 100 years. Two employees of the U.S. Soil Conservation Service and an engineer reported seeing the cougar on abandoned mine site they were inspecting.

In a break with longtime allies, President Bush jettisoned diplomacy and demanded that Saddam Hussein surrender power by tonight or face a military attack. The Iraqi leader showed no signs of compliance.

An exhibit at the Kentucky Coal Mine Museum in Benham is marking the 27th anniversary of the Scotia mine disaster.

Letcher County will get a one-time windfall of about $3.6 million for new water lines and other projects because of a change in the way coal severance tax money is distributed through the state budget.

Engineers working for the City of Whitesburg will study whether the city’s water system is capable of supplying water to Sandlick, Craft’s Colly and Dry Fork.