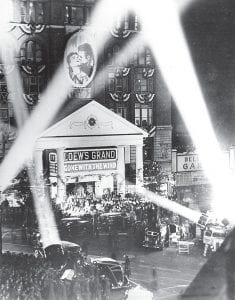 Searchlights framed the “Tara” facade of Loew’s Grand Theater on Peachtree Street in Atlanta for the movie premiere of “Gone With the Wind” on Dec. 15, 1939. Residents from Letcher County were among those trekking to Georgia to see the movie before it was released nationwide. (AP Photo)

To say that news of the pending arrival of the epic film Gone with the Wind spread through Letcher County like wildfire would be an exaggeration — but only a slight one if the flames were of the Hollywood variety.

“Not to be outdone by [theaters in] all the surrounding towns, the Jenkins Theatre this week booked Gone with the Wind for a week’s run beginning Friday, May 10,” said one of three stories addressing the subject in the April 18, 1940 edition of The Mountain Eagle.

“Theater goers are looking for its inception with much eagerness,” said one of two stories about the film appearing on that edition’s front page. “That the affair will be well attended is sure. The theater management is being complimented for getting the play for Letcher County.”

Set mainly on a Georgia plantation named Tara during the Civil War, Gone with the Wind is considered one of Hollywood’s greatest films and remains — when adjusted for inflation — the highest-grossing film ever. The film, which won a then-record eight Academy Awards, was released first in Atlanta and then in New York and Los Angeles in December 1939, but wasn’t made available to theaters elsewhere in the U.S. until January 17, 1940.

Clark Gable and Vivien Leigh starred in Gone with the Wind. (AP photo)

Gone with the Wind got its first mention in The Mountain Eagle on January 21, 1937 when, in the syndicated column “Stardust,” writer Virginia Vale noted that the competition for the role of Southern belle Scarlett O’Hara — eventually filled by British actress Vivien Leigh — was still up for grabs and being hotly pursued by several Hollywood starlets trying their best to become the choice of producer David O. Selznick. Actor Clark Gable, who would sign to play the role of Rhett Butler 19 months later, was also mentioned in Miss Vale’s column, but only in association with his possible role in a proposed remake of the 1925 silent film Ben-Hur.

Nearly three years later, on Thursday, January 4, 1940, the film got its second mention in The Eagle when community columnist Virginia Combs, now a member of the Kentucky Journalism Hall of Fame, wrote that three Letcher County women — Fannie Wright, wife of Letcher County Judge Dr. B.F. Wright, Irene Wright and Hazel Collins — had left Whitesburg for Tampa, Florida early the day before and would be stopping to see Gone with the Wind in downtown Atlanta, where the film was playing to standingroom only crowds at the 2,088-seat Loew’s Grand Theater.

Four weeks later, on January 25, 1940, Mrs. Combs wrote that Selma Dawahare, whose husband S.F. Dawahare started the Dawahare’s Department Store chain in East Jenkins in 1911, had been vacationing in Florida with daughter Nellie and that the two had stopped in Atlanta for a night to see the film while returning to Whitesburg.

In the 1940s, Letcher County residents with time and enough means could travel fairly easily to larger cities and vacation destinations because of the availability of the daily L&N passenger train service. On Saturday, February 10, 1940, Whitesburg coal operator Roland Price and his wife Nassarita were able to secure reserved seats for Gone with the Wind at the Kentucky Theatre in Lexington, which had the film for a two-week run.

In early March 1940, Mountain Eagle readers who wanted to see the film without traveling far distances began reading about scheduled showings of the film at theaters closer to home.

The first out-of-town movie house in southeastern Kentucky to secure a showing of the film was the New Manring Theatre in Middlesboro, which ran advertisements in The Eagle announcing that Gone with the Wind would be there for one week, beginning Sunday, March 10. All seats were reserved and available for $1.20, more than twice the going rate for a feature film at that time.

The Manring also advertised the film wouldn’t be available anywhere else in the region “except at increased prices” until 1941. Eagle readers soon learned that wasn’t the case, however, when large advertisements began appearing from several other theaters —the Appalachian Theatre in Appalachia, Va., the Nova Theatre in Cumberland, the Marge Grand Theatre in Harlan, the Family Theatre in Hazard, the Lynch Theatre in Lynch, and the Liberty Theatre in Pikeville.

Each of the theaters advertising here had secured the film for either one or two weeks in March and April, and offered reserved seating tickets for sale at Letcher County businesses such as Dawahare’s, the Bentley Theatre in Neon, and Nannie Lou’s Sweet Shop in Whitesburg, or by mail order.

By March 28, 1940, Eagle editor W.P. Nolan had become giddy over the added revenue advertising for Gone with the Wind brought to the paper.

“No doubt you have noticed the large number of Gone with the Wind ads appearing in this paper lately,” Nolan wrote on the front page of that week’s edition. “We have advertised for theaters in Winchester, Middlesboro, Appalachia, Pikeville, Lynch, Cumberland and Harlan. Now we wouldn’t boast for anything, but this must mean some kind of feather in our cap for theaters so far away to advertise in The Eagle.”

Added the editor: “Just a word here to those who have seen the picture: Please don’t tell us about any more of the scenes, as we are thinking of seeing it for ourselves and do not wish to know all about it beforehand.”

The showing of Gone with the Wind at the Novo Theatre in Cumberland appears to have drawn the most viewers from Letcher County. Although the run was shortened from seven to three days because of reasons not disclosed, at least 58 Whitesburg-area residents traveled across Pine Mountain to see the film at the Novo, columnist Virginia Combs noted in her May 2, 1940 column. Among those attending were Whitesburg Mayor Bill Collins and his wife, banker Herman Hale and his wife, Woodrow Dawahare, and Eilene Salyer, whose family built one of the first cable television systems in the nation.

If those folks and all the others had waited about two more weeks they could have seen Gone with the Wind at Jenkins.

“The Jenkins Theatre recently remodeled and installed plush seats and now stands in line with any theater this side of Lexington,” said one of the Eagle stories concerning the scheduled May 10 Jenkins showing. “This will probably be the only Letcher County theater to show this picture while it is a road show. The Jenkins show house has a seating capacity to accommodate 700, and every seat is expected to be occupied.”

Because Gone with the Wind was a “special road show” release, the showings were tightly regulated by the film’s distributor. In addition to all theaters having to charge a set price of $1.20 for reserved seating, they had to guarantee an intermission between the film’s two acts, and to show the movie three times each day except on Sunday when only two showings were required.

Gone with the Wind finally made it to the Kentucky Theatre in Whitesburg for a Tuesday and Wednesday showing on October 13-14, 1942, seven months after it was re-released in the U.S. The film returned to the same theater in Whitesburg for another Tuesday and Wednesday showing in April 1948, seven months after it was re-released for a second time.

Also set in the City of Atlanta while it was being burned by Union Army troops led by General William T. Sherman, Gone with the Wind is based on a 1936 Pulitzer Prize-winning novel by Atlanta newspaper writer Margaret Mitchell. The film follows beautifulbut spoiled cotton heiress Scarlett O’Hara’s attempts to take Ashley Wilkes (Leslie Howard) away from his wife and distant cousin, Melanie Hamilton Wilkes (Olivia de Havilland), who also happens to be Scarlett’s sisterin law. After the Civil War, Scarlett (Leigh) is wedded twice, once to rebellious Rhett Butler (Gable), but still longs to be with Ashley.

In addition to winning top Academy Awards for Best Picture and Best Actress (Leigh), the film also won Best Supporting Actress for Hattie McDaniel, whose portrayal of house slave Mammy enabled her to become the first African- American to win an Oscar. Because of Georgia segregation laws at the time, McDaniel was unable to attend the film’s premiere in Atlanta. She also was required to sit at a segregated table at the 12th Academy Awards ceremony in Los Angeles.

Gone with the Wind, which runs three hours and 54 minutes, was re-released on both DVD and Blu-Ray in late 2009 in celebration of its 70th anniversary.

While most of the reviews for the movie were then and remain now very positive, it has not been without its critics. On April 11, 1940, the Eagle carried a colorful review from a newspaper in Lyons, Georgia, the Toombs County Democrat, which took the film to task, partly for its length.

“Finally, after Melanie died, Scarlett realized that she didn’t love Ashley but Rhett,” said the review, which had first been reprinted in the Louisville Courier-Journal. “Scarlett was as changeable as a baby’s underwear. However, Rhett had had enough of her foolishness and when she told him she loved him he says, ‘Frankly, my dear, I don’t give a damn.’ Neither, by this time, did the audience. They were glad to see the end, their own having become number than somewhat.”