On May 31, 1943, Letcher County voters (excluding the young men away fighting in World War II) were scheduled to go to the polls to decide the question of whether alcoholic beverages could continue to be sold legally in the county. Among those wanting to keep liquor legal was County Judge Dr. B.F. Wright, whose front-page ad in the May 20, 1943 edition of The Eagle (below) drew an angry response from anti-liquor forces on May 27, 1943 (above).

The General Electric Store of Neon, which was owned and operated by Nile E. Skaggs, is now known as the Quillen Electric Company. This business was purchased a few days ago by Cossie Quillen and will be managed by Donald Wright. Farris Johnson will be a part-time radio repairman.

Pfc Bradley Breeding, now serving in the U.S. Army, has been promoted to corporal.

The War Department delivered shocking news Wednesday morning to Dr. Boaz Adkins, informing him that his son, Ralph, is missing in action in the Southwest Pacific, where he has been stationed on a submarine. Ralph Adkins is a Whitesburg High School graduate who joined the service in 1938. Dr. Adkins was forced to retire from his dental practice about a year ago because of poor health. 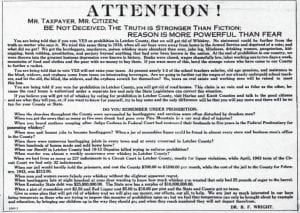 In a front-page advertisement, Reverend G. Bennett Adams urges all voters to go to the polls on May 31 and vote to outlaw the sale of alcoholic beverages in Letcher County. “Should you find a copperhead in your yard or near your home, what would you do?” Adams asks in his ad. “Pass it unharmed? No! A thousand times no. You would kill it and then rest satisfied that it would not bite your babies …”

In a full-page advertisement, The Letcher County Progressive Taxpayers League criticizes anti-liquor forces for working to get the May 31 local-option election scheduled while so many young Letcher County men are away fighting for the freedom of United States citizens. “Is it fair?” the ad asks. “When the men are away in the armed services of their country fighting for the liberty of the world, is it fair to take advantage of them by calling a local option election in Letcher County? It will be remembered that during World War I the professional dry organizations — interested in prohibition only as a well-paying profession — forced wartime and national prohibition upon the country. The millions of young men in our armies in France and in the camps at home bitterly resented being deprived of their right to vote on an issue which affected their personal, social and economic future. The entire prohibition experiment proved to be a national disaster. It uprooted the morale of the country. It created contempt for the prohibition law and disrespect for all law. It set up millions of bootleggers, moonshiners, rum runners and racketeers in a profitable illegal business.” 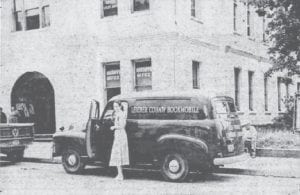 People who catch fish by dynamiting and illegal seining “are law violators of the worst sort,” says S.A. Wakefield, director of the Kentucky Division of Game and Fish. “When a stick of dynamite explodes in a hole of water, every living thing is killed — little and big fish alike, as well as all the crayfish and all other animal foods,” Wakefield says. “Many of the fish that are killed cannot be found, so they are left to rot. … When a hole is seined, every law of decency and good sportsmanship is violated, to say nothing of the Game and Fish laws.”

Mr. and Mrs. Willie Dawahare have returned to Whitesburg from a shopping trip in New York City.

The Potter Café located just below Burdine on U.S. 23 is undergoing a complete remodeling job. The location is headquarters for many of the Burdine youth.

The Quillen Drug Company, located on Main Street, Whitesburg, is getting a fresh coat of paint inside and out.

Napier’s Dry Goods Store in Neon is closing out its entire business after 13 years of operations.

This week marks a milestone in the way of progress for the citizens of the Linefork section of Letcher County as a new and sparkling bus will be traveling its highway daily into Letcher County. A.J. Fields of Kingscreek is the owner of the new bus line. Fields said another new bus will come to Whitesburg from Cowan in a short time, but the one in operation now comes to town via Smoot Creek.

Twenty well-located lots at Burdine will be sold at auction on Saturday, June 6. The property is located just below The Potter Café on the Jenkins-Pikeville Road (U.S. 23).

The Consumers Electric Company, which has been located in East Jenkins for the past eight years, has moved to Main Street in Jenkins and is located in the Tucker Building. The store, which sells Crosley appliances and Perry & Derrick paints, is managed by T.V. Bumgardner. Patty Bumgardner will assist her father until fall, when she will return to Lincoln Memorial University at Harrogate, Tenn.

R.W. Story announced this week that the Kiwanis Swimming Pool at Jenkins will open for the 1953 summer season on Saturday, May 30. Arville Goff will be the pool attendant. Admission for children is 15 cents daily or $5 for a season ticket. Adults will pay 50 cents a day or $10 for a season ticket.

William J. Roark, 26, son of former Letcher County Magistrate Wesley Roark, was killed in an airplane accident at Terrain Air Force Base, Texas, at about 7:30 p.m. on May 25. Craft Funeral Home, Whitesburg, will have charge of arrangements.

Edward T. “Ned” Breathitt was helped to a statewide victory in the Democratic primary by 1,602 Letcher County votes. Louis Nunn won the Republican primary in the county and statewide. He received 812 votes in the county.

Mrs. Harry M. Caudill was named Whitesburg’s Woman of the Year by the VFW Ladies Auxiliary. She was nominated by the Whitesburg Garden Club.

Glen Ford and Donald O’Connor are starring in “Cry for Happy” at the Alene Theater. Also playing is “Follow the Boys” with Connie Francis and Paula Prentiss.

Students at Alice Lloyd College are proposing a new State of Appalachia as it could be in 1985. They have prepared a map and have selected a flag for the new state. The State of Appalachia, say the students, would include the central Appalachian region from northeast Alabama through northwest Georgia, west North Carolina, east Tennessee, east Kentucky, southwest Virginia, and all of West Virginia.

An advertisement for a coal operation for sale in Floyd and Magoffin counties asks the question, “Want to make fast money in the coming coal boom?”

The Letcher Fiscal Court has voted to withdraw the county’s legal advertising from The Mountain Eagle by a 4-1 vote. According to District Five Magistrate Roger Burke, The Mountain Eagle does not qualify as the county’s legal paper because “Patch Work,” the newspaper’s entertainment section, is printed out of state. Eagle Publisher Tom Gish said the paper has been printed in Prestonsburg since 1972, but that no fiscal court members had asked him where the paper is printed. He also said that even if the Eagle was printed out of state, it would still qualify as the legal paper under state law.

Scotia Coal Company has recalled 94 miners to its Ovenfork mine in Letcher County. The miners rejected a request by Blue Diamond Coal Company, Scotia’s parent company, that they accept delays in wages due them under their contract with the company.

Linefork correspondent Thelma N. Cornett reports that she has Benham apples growing on a tree in her yard in spite of the unusually cold spring weather.

A recanvass of half of the county’s voting machines turned up only one change in the primary elections. The change was a 10-vote turnaround in the race for the Republican nomination for Commissioner of Agriculture.

An editorial in The Mountain Eagle talks of extensive ra- dio commercials paid for by oil and gas companies which heap scorn on mountain people. The targets of the ads are Cram Creek residents, who have blocked gas company bulldozers; the Kentuckians for the Commonwealth, and the Letcher Fiscal Court, which has adopted an ordinance which will require gas and oil drillers to acquire a permit, post a bond, and replace destroyed water supplies. The editorial says, “The oil and gas industry wants to come in and take (the oil and gas) all away and offers mountain people little or nothing in return, not even jobs except for a few. All they have to offer is destroyed garden spots, rutted roads, broken bridges, drinking water no longer safe to drink.”

The state Division of Abandoned Mine Lands and the City of Whitesburg are beginning a $40,000 study of two watersheds near Whitesburg to determine whether ground water supplies have been damaged by coal mining or other mineral exploration activity. The study is to cover 175 homes along KY 931, which parallels Sandlick Creek, and 250 homes along KY 2034, which runs along Craft’s Colly Creek.

William F. Caudill of Blackey has been named superintendent of the Jenkins School System. He will begin his duties July 1, 1993.

Cook and Sons Mining Company expects to recall workers laid off May 1 in about two weeks, after it completes demolition of a damaged coal silo.

Wal-Mart presented a Letcher County teacher with a check for $1,000 last week, naming her “Teacher of the Year”, but she may not be teaching come August. Sharon Holbrook was among 13 teachers who received a pink slip from the Letcher County Board of Education.

The Fleming-Neon City Council has approved a blighted and deteriorated property ordinance that will allow the city to condemn dilapidated property and force owners to clean it up or lose it.

A judge has turned down a motion for a new trial for April Boggs, instead sentencing her to 14 years in prison. Boggs was convicted last month of facilitation to murder, facilitation to first-degree robbery, and complicity to trafficking in marijuana. The charges stem from the 2002 murders of Timothy L. ‘Blister’ Cook and his 4-year-old son T.J.