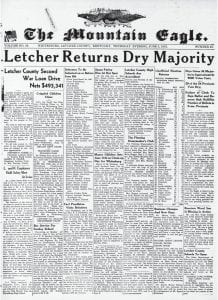 WHAT IF? — What would Letcher County’s economy and business climate be like today if voters hadn’t gone to the polls on Monday, May 31 and voted by a narrow 34-vote margin to outlaw the legal sale of alcohol in the county? How would the wet-dry election have gone if hundreds of young Letcher County men weren’t away fighting in World War II? Those are questions we continue to ponder but will never know the answer. Whatever your stand on the issue was or might have been if you were around then or is now, there is no denying the vote’s outcome had a long-lasting effect on the county — so much so that we have decided to reproduce the entire front page from that week’s edition, June 3, 1943. At the top of the sixth column you will see how voters in each of the county’s then-54 precincts viewed the issue.

“Dry” forces managed to get 34 more votes than “wets” as Letcher County voted this week to outlaw the legal sale of alcoholic beverages for the first time since Prohibition. A total of 5,960 votes were counted as cast, and a number in various precincts were nullified because of improper signature and failure to remove secondary stub attached to the ballot. As the paper is going to press, rumors are circulating that a recount will be requested. Meanwhile, ballots are being guarded.

Mr. and Mrs. Hugh Combs received word this week that their son, Hugh Combs Jr., is missing in action in the Pacific area.

Mother Craft, who has supported the campaign to make Letcher County alcohol-free, severed her connections this week with the Daniel Boone Hotel Dining Room and will begin serving meals to friends and customers from her home on Main Street.

Pvt. James T. Robinson of Jackhorn was presented with the Purple Heart Medal while a patient at Tokyo Army Hos- pital. Robinson is attached to the 7th U.S. Infantry Division.

David Caudill has been granted permission to operate a taxi cab in Whitesburg by Kentucky Commissioner of Motor Transportation John M. Kinnaird, who said Caudill is “fit, willing and able and intends to render full-time service and abide by the rules and regulations of the department.”

Hubert and Marshall Tackett are the latest of four Tackett brothers to serve their country as volunteers. Walker Tackett volunteered in 1941 and was reported missing in action after the Coral Sea Battle in May 1942. Edd Tackett served in the U.S. Army for 44 months in Panama and England. Marshall Tackett has served in the U.S. Navy for 15 months in Hawaii and Japan and expects to meet Hubert Tackett, his youngest brother, at Norfolk, Va., where he is stationed. The four brothers are the sons of Mr. and Mrs. Joe Tackett of Whitesburg.

The future of the United Mine Workers Hospital in Whitesburg and others in the 10-unit chain is in doubt as negotiations for the transfer of the hospital to a nonprofit regional board under the supervision of the United Presbyterian Church has run into trouble. The federal Area Development Administration postponed consideration of a $9,500,500 grant to aid in the purchase of the hospital chain. The UMWA was to close the hospitals July 1, but delayed the closing to Oct. 1 when the possibility of selling them to the Presbyterians arose.

Hurricane Gap School is the winner of a plaque for being the cleanest school in Letcher County. Teachers at the school are Faye Parsons and Mrs. James Kendricks.

An advertisement is announcing the forthcoming publication of Night Comes to the Cumberlands by Whitesburg author Harry M. Caudill. The ad says, “Already the volume, which traces the development of the Cumberland Plateau area from the first settlers to today, has received wide attention in Washington, where eastern Kentucky is in the limelight.”

Harry Smith of Blackey won the Democratic nomination for magistrate for District 4. An error in addition by the election commissioners had led to the impression that the election had been won by Lee Hogg, but Smith is the actual winner.

Mable Black has been appointed postmaster of Blackey.

Sherd Martin has declared war on snakes, according to Millstone correspondent Mable Kiser. She reports Martin has already killed seven snakes. Shade Sexton of Deane, was bitten by a copperhead.

Property damage of at least $1 million is estimated after “mini tornado” touched down in Letcher County. Mobile homes were overturned, rooftops were ripped off, windows were blown out and large trees were snapped like toothpicks during the storm. Only one serious injury was reported. Ashland Fouts of Ermine, had a finger severed by a door, which slammed on his hands during the winds. The National Weather Service first called the storm “high winds”, but later said the storm could well have been a tornado.

Fleming-Neon has received a $373,837 federal grant to rehabilitate its sewer system. The grant was announced by Congressman Carl D. Perkins.

The Jenkins City Council voted 3-2 to close Pine Lane in Dunham to coal truck traffic. The street leads to Beth- Elkhorn Coal Corporation’s Jenkins preparation plant and residents have been complaining of problems caused by coal truck traffic on the road.

Several hundred Letcher County residents are still without electricity after violent thunderstorms swept through the county. Ten thousand of Kentucky Power’s 13,000 customers in the county were left without power when the storm hit the county. The storm uprooted scores of trees and knocked down at least 25 power poles.

Motorcycle friends of the late Billy Hampton traveled to his gravesite to pay their respects on Memorial Day, says Blackey correspondent Grace Caudill. She says she looks forward to seeing them every year as they pass her home on Elk Creek on their way to the cemetery.

President Bill Clinton is “displaying a level of general incompetence that threatens the peace and tranquility of the United States,” states an editorial in The Mountain Eagle. “Mr. Clinton has taken so many different positions on so many different issues it is impossible for anyone to know what the man really believes or indeed whether he has any underlying beliefs or convictions,” the editorial says.

At least two Letcher County men are among 142 Kentuckians being sued by DirecTV. The company claims the defendants used illegal decoders to steal the company’s small-dish satellite television signal.

County workers will get a two percent raise, two more personal days, half of a holiday and better seniority benefits under a union contract approved this week by the Letcher Fiscal Court.

Letcher County officials are hoping a study by the Kentucky Transportation Cabinet will mean more state funding for the county road department this year.

The summer reading program at the Letcher County Public Libraries will kick off June 13 with a family picnic event at Mountain Heritage Village in Whitesburg.