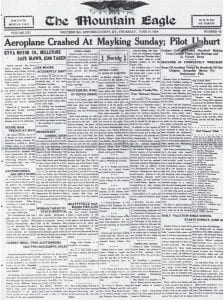 WHEN THE DAREDEVIL FLEW INTO LETCHER COUNTY — On this week in 1928, a daredevil pilot was forced to crash land in Letcher County after he became lost while flying from Cincinnati, Ohio to Knoxville, Tenn. The pilot, Graham Curry of Hendersonville, N.C., suffered only a slight cut to his right leg when he crashed in a field at Mayking. Curry said he was using the L&N Railroad tracks as a guide from Cincinnati to Knoxville, but started getting lost over Winchester when he began following the wrong fork of the railroad and found himself over McRoberts, where the track ended. Hundreds of people descended on Mayking to view the wrecked plane.

The Sweet Shoppe, which as been a very popular meeting place for the young crowd for several years in Whitesburg, has assumed new management and will reopen on June 15 with Mr. Floyd Mercer in charge.

A character who will be greatly missed from the community of Whitesburg is Charlie Sword, who was claimed by death on June 7. Often seen on the street, he was always friendly, cheerful and willing to help in any way he could. Mr. Sword, 54, served as janitor of the churches, many public buildings, and many homes. Firing he furnaces, he arose on cold mornings very early in order to get around so that all buildings would be comfortable. He also worked for the city water and sewer systems.

After selling Skaggs Electric Company in Neon to Cossie Quillen, Nile Skaggs and his wife and children have moved to Fort Pierce, Florida, where Mr. Skaggs has purchased a farm and orange grove.

In a special announcement to farmers, Holstein Hardware Co. of Whitesburg announces it has received “ammunition certificate Number 4 for .22 shells and shotgun shells” to be used for the control of predatory animals including hawks and ground squirrels. Buyers of the shells must sign the certificates.

Three women were hospitalized for injuries they suffered when the Blackey-Hazard bus overturned one mile below Ulvah on June 3.

Lt. Howard Burpo has been visiting parents and friends for a few days this week. While en route to the mainland U.S. from the South Pacific, Lt. Burpo’s plane was forced down at sea. He remained in the water for 28 hours before he was rescued and taken to San Francisco.

The Burke & Craft Funeral Home has been dissolved by majority vote of its stockholders.

Mr. and Mrs. Fitzhugh Pendleton have assumed management of the Daniel Boone Hotel on Whitesburg.

Kendall V. Boggs has been hired as the new principal of Whitesburg High School. Boggs, a native of Eolia, served five years as principal of Eolia Grade School before going to Harlan County in 1941, where he eventually became principal at Cumberland Grade School. He is a graduate of Union College and Eastern Kentucky State College.

A 35-year-old mine repairman, Willie Little, died Monday night when he came in contact with a high voltage wire while repairing a transformer at Consolidation Coal Company’s Hendrix Mine at Deane. Little, of High Street in Jenkins, is survived by his wife and two small children.

A new DeSoto-Plymouth dealership is opening in Jenkins. On display for the grand opening of Potter Motors is the new 160-horsepower, eight-cylinder DeSoto Firedome.

The Letcher Fiscal Court, presided over by County Judge Robert B. Collins and advised by County Attorney J.L. Hays, has adopted a $156,000 operating budget for Fiscal Year 1953-54.

A thief or thieves broke into two downtown Whitesburg stores Wednesday night, stealing $40 in cash and an undetermined amount of merchandise from Dawahare’s and $15 from Messenger Florist. The thief left his own clothing in Dawahare’s.

The Kentucky Department of Highways is soliciting bids for the bituminous surfacing of the Tillie-Elsiecoal-Flint road.

John Gose is a candidate for police judge of the City of Whitesburg in the August Republican Primary. In other election news, former State Rep. Bill Adams is running in the Republican Primary for Letcher County Judge. Meanwhile, Republican William “Bill” Blair says he is withdrawing from the race for state representative, citing family illness and business obligations.

Storms and tornadoes that swept across the eastern United States on Wednesday also wreaked havoc on Letcher County. High winds carrying debris hit Whitesburg about 2 p.m. and caused more than $10,000 in damages to various buildings. Combs Motor Company lost three large plate glass windows in its showroom. Winds destroyed the screen and much of the sheet metal fencing at the Elinda Ann Drive-In. The Mountain Eagle lost a large plate glass window. At least 12 windows were blown out of the Whitesburg High School building. Mr. and Mrs. Ballard Clay’s home was heavily damaged by a fallen tree as was a car belonging to Whitesburg Grade School teacher Iva Maggard.

Dr. Lundy Adams is expanding his medical practice and will now see patients in both Blackey, where he has been for eight years, and in Whitesburg at his new office in the Cook Building.

The federal Area Development Administration has given the United Presbyterian Church a $3,900,000 grant to pur chase five United Mine Worker Welfare Fund hospitals in Kentucky, including the one in Whitesburg.

The Letcher County Board of Education is asking the Whitesburg Parent Teacher Association (PTA) to decide whether a new high school or a new grade school should be built first.

Whole fryers are on sale at the Whitesburg A&P grocery store for 25 cents a pound. A 20-ounce Cornish hen costs 59 cents.

The cast of “Little Shepherd of Kingdom Come,” an outdoor drama, includes Judy Breeding as Mrs. Turner, Beverly Collins as Melissa, Will Collins as Joel Turner, and Norman Banks as Nathan Cherry.

Harold Fields, son of Mr. and Mrs. David Fields of Kingscreek, has completed four years of apprenticeship in sheet metal in Taylor, Mich., and has received his journeyman’s card.

Twenty-eight college students are going from house to house in Letcher County trying to identify county residents who suffer from black lung, asthma, emphysema, bronchitis, or other disease which affect breathing. They are employed by Respiratory Clinics of Eastern Kentucky, a subsidiary of Mountain Comprehensive Health Corporation, which has received a grant from the federal government to set up services to treat, educate and help rehabilitate persons suffering from respiratory diseases.

The memoirs of former Letcher County coal miner G.C. “Red” Jones will be published by the University Press of Kentucky. The University Press agreed to publish his autobiography after its editorial board read a manuscript of the book Jones sent to Harry Caudill, a former Whitesburg attorney who is a history professor at the University of Kentucky. Growing Up Hard in Harlan County deals with what it was like growing up in the mountains and mining coal in earlier days.

Jenkins Mayor Ernest “Sam” Wyatt vetoed an ordinance banning coal trucks from traveling on Pine Lane, a residential street in the Dunham section of Jenkins. The Jenkins City Council has passed the ordinance after complaints from Pine Lane residents about coal truck traffic.

An article about veteran Whitesburg High School teachers Jimmie and Loretta Arthur says they retain “enthusiasm for opening young people’s eyes to their western heritage in the arts and sciences and to the world around them.” The couple have taught math and science in WHS since the late 1960s.

A intense storm fell on parts of Letcher County, producing more than two inches of rain in less than an hour. It was reported that at last two bridges were washed out at Craft’s Colly.

Goebel Ritter, an assistant superintendent in the Letcher County Schools for a number of years, announced he will be retiring at the end of the month. Ritter is well known to many Kentuckians for a basketball career that included a stint playing professional basketball with the New York Knickerbockers. He began teaching in 1951 and was a coach at Fleming-Neon, Whitesburg High School, and Hazard High School.

More than 15 percent of Letcher County’s labor force was out of work in April, giving the county the fifth highest unemployment rate among Kentucky’s 120 counties. Letcher County’s 15.2 percent jobless rate is the highest among the eight counties in the Kentucky River Area Development District.

The U.S. House of Representatives voted last week to extend $1,000 child tax credits through the rest of the decade, but left uncertainty over whether low income families will cash in on the same rebates going out to other households this summer. That means that more than half the families in Letcher County may have to wait for money the Bush administration had billed as immediate rebates intended to provide stimulus for the economy.

The Fleming-Neon City Council narrowly approved a sixth member to serve on the city council. The council voted 3-2 to appoint Cheryl Furby of Henry Hutton Lane to fill the seat left vacant when Kay Hammond resigned in May.

Magistrate Jim Ward wants to advertise statewide to find someone who can bring industry to Letcher County. Ward, who represents District 1, made a motion at a Letcher Fiscal Court meeting last week that the county advertise for an economic development director, but the motion died for lack of a second.

State wildlife officials agree that the black bear population is increasing in Letcher County, but no one seems to know exactly how many of them are roaming around here.