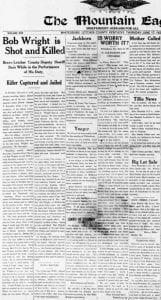 On Sunday, June 13, 1926, Letcher County Deputy Sheriff James Robert Wright was killed in the line of duty at Burdine, near Jenkins. The death occurred while Wright, Prohibition Enforcement Offi cer Clark Day, Sheriff Reynolds and other officers were, in the words of Officer Day, making “raids on bootleggers and whiskey runners in the upper end of the county.” Charged with murder was Joe Vignioroto, an Italian boarding with Joe Centi. The story was carried in the June 17, 1926 edition.

Judge Z. Wells of Paintsville has been appointed special judge for the recount of ballots in the recent local option election. Information reaching The Eagle as press time approaches is that the “drys” have gained five votes, meaning that the margin of voters who voted to outlaw alcohol sales in Letcher County has grown to 39. In a related matter, Estill County has become the 74th of Kentucky’s 120 counties to go “dry.” Estill County voters voted for prohibition by a margin of more than two to one.

At least 30 young men from the town of Whitaker, between Seco and Neon, are overseas fighting — perhaps the greatest number from such a small community, writes Mrs. John C. Newsome of Seco. Four of the 30 have been wounded in action in North Africa — George Ison Jr., Edward Salyer Jr., Claud Reed Jr., and Garlan Stidham Jr.

Letcher County poultry farmers are being asked by the government to produce approximately 448,000 eggs this year, 6.7 percent more than in 1942, as their share in the Food for Victory program.

Charles Russell, 59, a black employee of the Elk Horn Coal Corporation, was killed when he came into contact with a high-tension wire in the Haymond mine on June 10. He worked for the company 24 years. Funeral services were held at the Haymond Church. Burial was Cumberland.

Prominent Whitesburg attorney D.I. “Doug” Day died at his home on June 12 of a cerebral hemorrhage he suffered 10 days before.

Promising to modernize the Letcher County Sheriff’s Office by installing a two-way radio system, former Kentucky State Police Trooper Elwood Champion has announced his candidacy for sheriff in the Democratic Primary. Champion, a native of McRoberts and 1943 graduate of Jenkins High School, resigned from the state police force recently so he could run for sheriff. Champion, a Navy veteran, applied to become a trooper after he was part of a large-scale layoff at Consolidation Coal Company in June 1949.

Letcher County Judge Robert B. Collins is a candidate for sheriff in the Democratic Primary in August. “Bootlegging and roadhouses have no place on my platform,” Collins says. “I pride myself and the people for living in a dry county, and I will help keep it that way.”

James M. Caudill, a Neon businessman, former teacher and postmaster, has announced his candidacy for the office of Letcher County Judge in the Democratic Primary in August. Caudill says he carries the same name and is distinctly related to the first Caudill to ever enter Letcher County, who now lies buried at Blackey.

Pikeville City Councilman Jack Trimble today swore out an arrest warrant charging Mayor T.M. Stratton with illegal parking. Trimble said the warrant is necessary because city police refused to put a ticket on the mayor’s car, which was parked in a no-parking zone at the entrance to a hotel partly-owned by Trimble. Mayor Stratton has advocated strict enforcement of parking ordinances in Pikeville.

“Heard on the street: I would rather work for a living than to get into politics,” the Eagle says.

Actor Audie Murphy will star in “Gunsmoke” at Jenkins Theatre on June 18 and 19. On June 20, Roy Rogers and Trigger will star in “Springtime in the Sierras.” On June 21 and 22, Dean Martin and Jerry Lewis star in “Scared Stiff.”

Mr. and Mrs. Frank Abdoo have opened a fruit market in Neon.

Capitol Records recording artist Martha Carson, a Neon native who stars on the Grand Ole Opry in Nashville, is appearing in concert tonight (June 18) at the Elinda Ann Drive-In in Whitesburg. Opening the show will be Salty Holme and Mattie O’Neil.

Smittie’s Dry Cleaners of Whitesburg is offering a 20 percent discount to customers who bring in their clothes for dry cleaning and pick them up when finished. Smittie’s says it will still offer pick-up and delivery at regular prices.

Undersecretary of Commerce Franklin D. Roosevelt Jr. and other top federal officials visited eastern Kentucky to talk about improving the economy of the region. While at a meeting at Jenny Wiley State Park, Roosevelt heard a request by the members of eight area development councils that President John F. Kennedy work to establish an authority similar to the Tennessee Valley Authority. Roosevelt said there is no future for increased employment by the coal industry because of mechanization. Instead he said the future of coal is in development of power plants within the coalfields to produce cheap electricity from coal.

Paul Hadley, director of the Division of Arts and Crafts in the Kentucky Department of Economic Development, has talked members of the Jenkins Kiwanis Club into forming a corporation to build a resort at Raven Rock. He offered to give them a feasibility study paid for by the Cloud City Corporation of Whitesburg for a similar resort on Pine Mountain in exchange for $4,000 in stock in the hotel for the Cloud City Corporation.

Potter Motors of Jenkins and Wright Motor Co. of Neon are advertising that Plymouth has the lowest-priced twodoor sedan. The car has a five-year, 50,000-mile warranty.

A congressional subcommittee has voted not to hear any bill that would abolish strip mining. The vote came as such a bill was scheduled to be introduced in Congress.

In a letter reprinted from the Iowa City Press-Citizen, columnist Max Lerner writes that people who lament that Watergate was a constitutional crisis have missed the greater crisis of values. Lerner says that it is true that the presidency is in peril, but the American belief in basic life values is in even greater peril.

Daisy Halcomb writes that Isom was “a little shopping center” that has a new Pic Pac grocery store, a furniture store, the Cow Shed Trading Post, two clothing stores, an auction house (on Saturdays), a nice market, a racetrack, an ice cream and sandwich stand and a service station. She notes that the name has always been Isom, not Ison like the family name common in the area.

Commodity foods delivered to Letcher County have been cut in half after the federal government reduced the amount of foods it appropriates for the program.

The Internal Revenue Service advises that losses from a tornado last week may be tax deductible.

The Letcher County Fiscal Court has received a $47,430 grant from a national program to provide emergency food and shelter to those in need.

Brown University in Rhode Island is involved in a “bold educational experiment” by computerizing its campus. Supporters say it will revolutionize education by reducing the mechanical workload. Critics fear computers will inhibit human interaction.

Vernard Whitaker, controller for Childers Oil Company, died June 17 when the helicopter he was piloting exploded in the air and crashed in Gordon. Witness speculate that the helicopter might have hit a power line, but police could find no downed line.

The Letcher County Library Board reports that the new Harry M. Caudill Memorial Library in Whitesburg will be completed in five months.

The U.S. Internal Revenue Service has filed a tax lien against the Letcher County Board of Education for failing to pay $18,569.16 in withholding taxes.

Sheriff Steve Banks says he discovered 318 marijuana plants growing in a field at Hallie while he was fishing in Linefork Creek.

Food Fair supermarket is advertising a 12-ounce package of bacon for 59 cents.

Bizzack Construction Inc., Kentucky’s largest road builder, has been chosen to prepare the site for the new Letcher County Central High School. The board of education will pay Bizzack $3,034,446.80 to prepare the Ermine site for construction.

Carolyn Adkins of Jenkins, was among three people killed when a piece of mining equipment fell off a truck on U.S. 23 and caused a two-car accident. The driver of the truck that was hauling the equipment was charged with murder.

Sykes Enterprises Inc., a Tampa, Fla., based computer support company with three offices in eastern Kentucky and southwestern Virginia, is closing its Hazard call center. The company will lay off 399 employees beginning August 15.

Four months after the Letcher Fiscal Court approved an ordinance joining the National Flood Insurance Program, flood insurance still isn’t available in Letcher County. It may be as much as six week before the federal government approves the county’s application to join the program, freeing up insurance companies to sell the policies and allowing banks to make loans for work in the flood plain.