This headline appeared in an April 1952 edition of The Mountain Eagle.

This week in 1952, much of the county was still abuzz with talk about the wife of a murder defendant who helped foil an inmate’s escape from the decrepit Letcher County Jail the week before.

Mrs. Carl Swanager was visiting her husband in the jail on Sunday, August 3, 1952, when she saw a prisoner — later identified as Charles Carter — flee the jail and run along the bank of the North Fork of the Kentucky River toward the L&N Depot. The jail, built in 1908, was located where the old Letcher County Health Department building now sits. The building today houses the county sheriff ’s department and the county’s water and sewer department. The depot was located near the foot of School Hill, on what is now part of an on/off ramp to the Whitesburg bypass

Carter had been convicted of storehouse breaking and was awaiting transfer to the state penitentiary. He was the third inmate in a week to escape by sawing his way through bars covering a jail window. 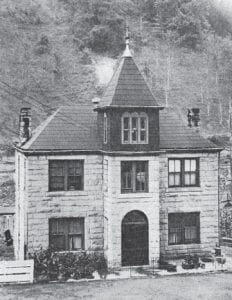 The old Letcher County Jail was built in 1908 and sat behind the courthouse on the lot now occupied by the sheriff ’s office and water department.

After Mrs. Swanager told Deputy Jailer W.H. Dyer what she had seen, Dyer drove to the depot building, spotted Carter running along the riverbank before chasing him behind a nearby house and then capturing him.

Carter’s short-lived escape occurred just five days after two other inmates were able to break out of the jail by sawing their way through a separate window. Carter had hoped to leave with them, but was too big to fit through the hole. After that first breakout, Deputy Jailer Dyer had contacted The Mountain Eagle to complain about the jail’s condition and predict that more escapes would occur soon. Carter was transferred on to the state penitentiary at LaGrange the day after his escape and capture.

Mrs. Swanager’s husband Carl, then 39, was in jail awaiting the second of three trials he would stand in connection with the October 5, 1951 shooting death of 34-year-old Harold Dyke outside the roadhouse Dyke operated at Sawdust Junction, Isom.

Swanager was tried for murder later in 1951 and was found guilty by a special Perry County jury that had been brought to Letcher County for the trial. The jury had recommended that Swanager be sentenced to life, but Swanager won an appeal and was granted a new trial because a member of the Letcher County Grand Jury that indicted him was ruled disqualified to serve.

The second trial for Swanager was held in Letcher Circuit Court in April 1952 and resulted in his being sentenced to 21 years in the state reformatory after being found guilty of voluntary manslaughter.

Swanager’s second trial was prosecuted by prominent Lexington attorney John Young Brown and defended by Whitesburg attorneys French Hawk and Harry Caudill, both of who had been appointed by the court.

“The verdict was anti-climatic to most of the crowd which had overflowed the courtroom to hear the brilliant oratory presented by the defense and commonwealth lawyers after evidence in the case was introduced,” The Eagle reported on the front page of its April 17, 1952 edition.

The Eagle’s story about the trial went on to say “a lawsuit pending in circuit court charging Swanager with larceny was said to have been the cause of the trouble. Dyke was to have been a witness against Swanager in the case.

“At the time of the shooting, Swanager and a woman were sitting in Swanager’s car and Dyke was on the outside of the car. Swanager and the woman claimed that during an argument that occurred, Dyke reached in his back pocket for a wrench.

“Thinking the man was reaching for a gun, Swanager said he picked up the .44 caliber pistol which was on the car seat between him and the girl and shot through the open window of the door, the slug striking Dyke high up on the right side and killing him instantly.”

Swanager was granted a third trial by the Kentucky Court of Appeals after the court ruled that some of the witnesses in the second trial were “incompetent.”