The murder trial of a 35-year-old ex-convict from Logan, W.Va., has been moved from Letcher County to Pike County and will begin Nov. 8. Letcher Circuit Judge R. Monroe Fields ordered the change of venue after a conference between Commonwealth’s Attorney J.E. Childers and murder suspect Tommy Nelson’s court-appointed attorneys, French Hawk and H. Monroe Blair, both of Whitesburg. Nelson is accused of robbing and murdering Freelin Estepp, 25, and robbing and shooting Claude Ison, 30, near Millstone Oct. 7. Police say Nelson robbed and shot Estepp and Ison after accepting an automobile ride with them. Nelson’s former wife, 29-year-old Kate, was his companion at the time of the shootings earlier this month and is expected to testify as a witness for the commonwealth. She has also implicated Nelson in two other slayings. (See related clipping at top of this page.)

What is said to be a record crowd of onlookers showed up at the Letcher County Courthouse on Monday to hear the trial of Tommy Nelson, who is accused of murdering Freelin Estepp, 25, and shooting Claude Ison, 30, at Millstone 18 days ago. Before the trial was ordered moved to Pike County, testimony was heard from Nelson’s wife, Kate Nelson, 29, after her husband was removed from the courtroom. Mrs. Nelson said the couple married in West Virginia when she was 13, and that he eventually deserted her and her baby daughter. Mrs. Nelson said she was told later by a close relative of Tommy Nelson that he had died. She said she remarried, only to have Nelson show up at her home after he was released from the West Virginia State Penitentiary. Mrs. Nelson said she ended up in Letcher County after Tommy Nelson forced her into his car under the threat he would kill her and her daughter and mother if she did not leave with him. Also attending Monday’s court session were Mrs. Tom Hamilton and daughter of Charleston, W.Va. Ohio authorities say Tommy Nelson killed Tom Hamilton in Ohio after he had befriended the Nelsons and sheltered the couple for two weeks. South East Coal Company and the United Mine Workers Union have joined forces to hire a crime specialist from Knoxville, Tenn., to assist with the prosecution of Tommy Nelson. 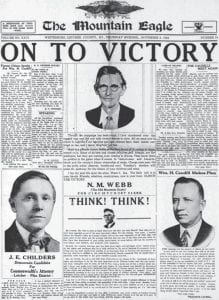 Since The Mountain Eagle was founded 106 years ago, Letcher County politics have often been the top story during the week leading up to General Election Day. The week of Nov. 2, 1933 was quite different only because The Eagle’s founding editor and publisher, Nehemiah M. Webb, was seeking the office of Letcher Circuit Court Clerk as the Democratic Party’s nominee. Though we don’t know Mr. Webb’s motive for mixing politics with his newspaper job, we assume the decision was purely financial. Like most of the nation, Letcher County and the eastern Kentucky coalfields were mired deeply in the Great Depression in 1933. Mr. Webb was having a hard time collecting bills owed to the newspaper, which by then had fallen in size to four pages, and to its job printing operation. Interestingly, Mr. Webb used his position with the paper to place his message at the top center of the front page. While not clearly identified, the message under Mr. Webb’s statement was from Republican candidate for sheriff, J. Harvey Hogg. The NRA emblem in the upper right corner signified the paper’s support for National Recovery Administration, a New Deal agency started earlier in the year by President Franklin D. Roosevelt. Only a few copies of the paper from 1933 still exist.

The story and headline above are taken from the front page of the Oct. 14, 1943 edition and tell the story of an ex-convict from West Virginia who was charged Oct. 9, 1943 with robbing and killing a Letcher County man two days earlier. Less than a month after the alleged crime and subsquent arrest, the defendant was already being taken to trial in Letcher Circuit Court. More information appears on this page in column beginning near bottom left.

A special judge in Johnson County has upheld the results of the May local option election that outlawed the sale of alcohol in Letcher County. The county’s “wet” forces had filed a lawsuit seeking to overturn the results of the election, in which voters elected to go “dry” by the slim margin of 32 votes.

Major Narce Whitaker has been promoted to the rank of lieutenant colonel in the U.S. Army Air Corps. Lt. Col. Whitaker, a graduate of Stuart Robinson School, has been putting together an exemplary record of achievement as a fighter pilot since the Japanese attack on Pearl Harbor on Dec. 7, 1941.

Members of the United Mine Workers Union District 30, which represents 5,000 miners in Letcher County, 5,000 in Perry County and 6,000 in Floyd County, have voted in favor of a $1 assessment per miner to be awarded to the USO or the War Relief Fund.

“There are no riches to be gained or pleasure achieved in serving as a member of the Whitesburg City Council, other than a desire upon the part of its members to work to the end that our city is made a better community in which to live.” Those words were included in a statement to Whitesburg voters from council members Arthur Banks, Henry Deal, Ed Williams, B.P. Sergent, J.B. Polly and Milburn Polly, who are seeking election Nov. 2 on the “Scales of Justice” ticket. Opposing that slates are members of the “Open Book” ticket — Parnell Johnson, C.M. Bowen, Walter Enlowe, Lawrence Day, Howard Combs and Lee Adams. The Open Bookers pledge to remove all buses from Main Street and “publishing a financial statement once a year so the people will know where their taxes go.”

When Kentucky’s voters go to the polls Nov. 2, they will be asked to approve an amendment to the commonwealth’s constitution that would empower the Kentucky General Assembly to provide by general law for a compulsory system of workmen’s compensation and for the enforcement thereof.

A new funeral home is set to open in Whitesburg on Nov. 1. Evans Funeral Home will be located in the Lucas Building across Railroad Street from Lewis Wholesale and Home Lumber Company.

A hotly contested race for Letcher County Court Clerk is winding down this week with front-page pleas to voters by incumbent Charlie Wright, a Democrat, and Republican challenger Mrs. Troy W. “Cora” Frazier. The two candidates have been bitter rivals since Wright narrowly defeated Mrs. Frazier’s husband in a race for the same office in 1949. Troy Frazier was initially declared the winner of the race, but was forced to relinquish the office four months after a recount ordered by the Kentucky Court of Appeals showed Wright had won. Mr. Frazier died of a heart attack in November 1952. Asks Mrs. Frazier: “Who needs help — a widow woman or a young man who has had office four years and who is qualified to get a job and support his family like other men?” Wright answers that he is the only person in the race who has children to support. “I have six,” Wright says. “I need to office in order to help them more than to help myself.”

Boonie Burkes of Jackhorn was seriously injured when the 1939 Pontiac automobile he was driving collided with a school bus near the foot of Rockhouse Mountain, near the opening of the Hemphill mine. The wreck occurred at 7:30 a.m. Tuesday while the bus was en route to Fleming-Neon Grade School. Burkes was transported to Good Samaritan Hospital in Lexington for treatment of a badly broken leg. Kentucky State Police said slippery roads helped cause the mishap.

Twenty-four students from Letcher County are among the 749 students enrolled at Morehead State College for the current fall semester.

County officials are busy with moving chores as they vacate the courthouse in preparation for demolition work on the building.

. Letcher County was on the last leg of the final campaign tours of both candidates for governor of Kentucky. Ned Breathitt is the Democratic candidate, and Louie B. Nunn is the Republican candidate.

A number of Letcher County residents took a ride in the snorkel attachment to Whitesburg’s new fire engine. The truck was purchased with $63,480 in federal revenue-sharing funds. The city is spending an additional $4,000 to enlarge the door to the fire station so the truck can get through.

The Letcher County Courthouse was cleared after a telephone caller told the county clerk’s office a bomb was set to go off in the building in the next 40 minutes. Sheriff Lewis Hall said he inspected the building and found nothing dangerous.

Bennie Fouts, a Marine for 12 years, was visiting his family in Letcher County when he fell into the Bull Hole on Pine Mountain. Fouts was attempting to explore the Bull Hole using a 25-foot chain attached to a 25-foot rope when he lost his grip on the rope and slid down to a foothold on a ledge at the 50-foot depth. He was pulled from the hole by a rescue squad. Tradition has it that defeated candidates in Letcher County are sent to the Bull Hole for a cleansing of their souls. Fouts is not running for office.

Proposed legislation to limit the scope of the broad form deed received preliminary approval by the joint judicial/civil committee of the Kentucky General Assembly. The committee listened to a presentation by Rep. Greg Stumbo of Floyd County and heard testimony from eastern Kentuckians who have been affected by the broad form deed, and voted 12-0 to pass the bill favorably out of committee. The proposed legislation would limit the methods of mining to the methods commonly practiced in the area at the time the mineral was severed from the surface.

Monique Wampler of Mayking, was selected as Whitesburg High School’s homecoming queen. She was escorted by Yellowjacket running back Tim Howard. The next day she set a course record in a six-team cross-country meet at Louisa with a time of 11:55. Also setting a course record with a time of 16:51 in a 3.2-mile race was WHS senior Jimmy Stephens.

The Letcher County School System is under investigation by three state agencies. Teams from the Office of Management Assistance, a state Department of Education branch which works with troubled school systems, are in Letcher County visiting every school in the district to examine instructional programs. Investigators from the Office of Education Accountability, a watchdog agency of the state legislature, are also in Letcher County. State police investigators visited school board offices, but there is no indication what they are checking or what interviews they conducted.

Nature played a Halloween trick on the Kentucky Mountains Oct. 31 with a hefty pelting of snow throughout the day.

Official delegates to the National Association of Woolly Worm Weather Watchers (NAWWWW) have informed Mountain Eagle columnist Ike Adams that late fall and early winter will produce most of the coldest weather. They say the coldest nights will be between Thanksgiving and the end of the year. More than half the woollies predict a whiter Christmas than in 1992.

A two-story rental home in Jenkins was still smoldering Saturday after it was destroyed by fire on Halloween night. Officials with the Jenkins Fire Department suspect the fire may have been started on purpose. The former coal camp house was vacant.

More than two dozen children in Letcher County may lose their health insurance benefits as a result of a state plan to charge premiums for the Kentucky Children’s Health Insurance Program (KCHIP). Parents who earn between 150 percent and 200 percent of the poverty line and whose children are insured through KCHIP had until today to pay the state their first monthly premium for the insurance.