100 years ago this week, Letcher County was all abuzz with talk about that week’s election. 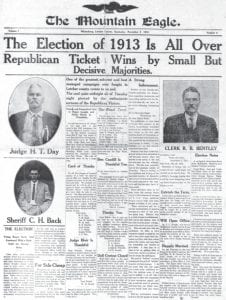 “One of the greatest, soberest and best managed campaigns ever fought in Letcher County comes to an end,” The Mountain Eagle says in a headline on its front page. “The cool quiet midnight air of Tuesday night pierced by the enthusiastic screams of the Republican victors.”

“It was real interesting to see some of the ladies leading to the polls and asking for ballots,” Mountain Eagle editor Nehemiah M. Webb writes in an editorial. “Of course they could only exercise their rights in the Superintendent’s race.”

Kentucky Gov. James B. McCreary has declared Thursday, Nov. 27, 1913 as a day of thanksgiving and prayer in the state.

A combination subscription for The Mountain Eagle and the Cincinnati Weekly Enquirer is available for one year for $1.50.

The construction of concrete sidewalks will be finished this week in Whitesburg from the North Fork of the Kentucky River near the Dow Collins barn up the North side of Main Street to the corner at Adams’s Store.

The greatest and most destructive conflagration known in the history of Breathitt County occurred Nov. 1, resulting in $150,000 in damages to downtown Jackson. Flames were discovered about 8 p.m. in a small building near the Thompson Hotel on Broadway. The fire couldn’t be extinguished until 31 buildings had already been destroyed. Gov. McCreary has ordered State Guards out to patrol the town, which is now under martial law.

“A great wave of development is spreading over Letcher County and this end of the state, and no housekeeper, businessman, citizen or farmer can afford to allow himself to stand idly in the rear or remain ignorant of what is transpiring right in his midst,” Eagle editor Nehemiah M. Webb writes urging readers to subscribe to the paper. “Over the pathway of progress, along the avenues of business, right down in the channels where the brawny arms of labor strike for gold will be found the Eagle inspiring and encouraging.”

“No. 1 Mine in Burdine has reached the production level of 625 cars in a day.

All U.S. coalmines with a mining capacity of at least 50 tons are again operating after President Roosevelt ordered them seized and under federal control. Roosevelt’s executive order, designed to put the nation’s strike-bound mines back to work, authorized Coal Administrator Harold L. Ickes to fly the U.S. flag over the properties to show federal control. Roosevelt also authorized use of federal troops to protect miners who may wish to work. He acted after the United Mine Workers’ policy committee failed to call off the nation’s fourth general coal strike or approve a proposed War Labor Board wage plan.

James Mason, 52, of Camp Branch, was killed by a slate fall in a mine owned by J.B. Caudill at Camp Branch on Nov. 3. Mr. Mason leaves behind his wife, two daughters, and two sons.

Pfc. Harold Thomas Nicholson, 21, was killed Oct. 29 when the transport plane in which he was aboard crashed while trying to make a forced landing. Nicholson, son of Mr. and Mrs. L.F. Nicholson of Fleming, was one of 14 officers and men who were killed after the plane crashed during a training operation after taking off from Camp Mackall Army Airfield in Hoffman, N.C.

Mrs. Reable Griffith Tinsley of Jenkins has been named a finalist to attend the Plaza Hotel Style Show in New York City on Nov. 10. Mrs. Tinsley was awarded the trip to New York by winning the Huntington Elimination Fashion Show, where she competed as Miss Consolidation Coal Company. A native of Jenkins, she is a math teacher in the Jenkins Independent school system.

Work on another hospital in the chain of 10 to be built by the United Mine Workers’ Welfare Fund will get underway Saturday with groundbreaking ceremonies at Whitesburg. The 92-bed Whitesburg hospital will be one of the largest in the project. Work is scheduled for completion in two and one-half years.

One of the largest collections of photograph negatives in southeastern Kentucky was lost Monday when the frame building housing D.P. Short’s Studio burned to the ground in Neon. The fire of unknown origin spread to a nearby house that was also destroyed.

A special meeting of American Legion Post No. 152 will be held in the Letcher County Courthouse Nov. 10 to discuss plans for completing a new home for the post on Pine Mountain. The meeting will begin at 7 p.m., Central Standard Time.

The use and misuse of antibiotics was the subject of a talk by Dr. Carl Pigman during a meeting of the Letcher County Medical Board. The demand by the public for penicillin treatment was among the issues discussed.

Barbara Blair, daughter of Mr. and Mrs. Brady Blair of Letcher, has enlisted in the Army Air Force and is stationed at Keesler Air Force Base in Mississippi, where she is receiving training in radio technology. Miss Blair is a graduate of Stuart Robinson High School.

The Jenkins High School Cavaliers ended the regular season with a 6-3 record after eight seniors led the team to a 33-6 pasting of the Belfry Pirates in Jenkins. The win was credited to the play of Carl Bain, Frank Asbury, Franklin Mink, Thurman Tucker, Jack Horner, Burton Bradley, Bobby Collier and Raymond Ricketts.

The Whitesburg Yellowjackets need one more win to take the championship of the Eastern Kentucky Mountain Conference. The Yellowjackets are favored to defeat the Wayland Wasps this Friday to secure the title.

Democrat Edward T. Breathitt carried Letcher County and the state by a narrow margin to be elected governor. He defeated Republican Louie B. Nunn.

The Jenkins football team was declared the winner of the East Kentucky Mountain Conference at the annual conference meeting. Jenkins players Phil Greer, Robert Collins, Kenneth Blair and Thurman Hall were named to the conference first team. Also named to the first team was Ty Hall of Whitesburg.

The federal Community Facilities Administration has approved a $133,000 loan to the City of Whitesburg to help finance a water system extension project. The loan is in conjunction with a $239,000 grant from the Accelerated Public Works Program.

A Mountain Eagle editorial on the election says, “It was a victory of the outs over the ins, with candidates in both parties scoring major upset wins. . . . (it seems) a fair conclusion that there is vast voter unhappiness with the way the county’s affairs have been run. Obviously, there’s the feeling we have had too much crime and not enough law enforcement; too much talk about roads and not enough road building; too many boasts and not enough performance.”

The A&P supermarket in Whitesburg has been expanded, nearly doubling the floor space of the building. Among the new items for sale are greeting cards, hardware, and yarn.

Floyd Circuit Judge Hollie Conley has denied a motion for summary judgment in the legal advertising suit filed by The Mountain Eagle against Letcher Fiscal Court, meaning the case will go to trial. The Eagle filed suit after the fiscal court voted to declare the Community Press the official paper for legal advertising in Letcher County.

Postal employees used an oil lantern to sort mail during a power outage in Whitesburg. Workers hand canceled the morning mail and distributed incoming letters, magazines and parcels by oil light — and made their deadline. Sue Holbrook is the Whitesburg postmaster.

Carroll Smith, a Republican who ran as a reform candidate, was elected county judge/executive. Sam Wright won the office of circuit judge, and Jim Wood Jr. the office of district judge. William Lewis Collins is the new commonwealth’s attorney, while Margaret Nichols was unopposed for circuit clerk.

Gospel singer Jessica Creech of Premium, is the district winner of the Farm Bureau Talent Contest. She will go on to compete in the state contest.

The U.S. House of Representatives approved legislation which locks in the Letcher County-Eastern Kentucky route for the proposed federal Interstate 66 highway. The bill, which passed by a unanimous vote, was sponsored by Rep. Harold “Hal” Rogers (R-KY).

The Whitesburg premier of “Night Ride”, a film adapted from a story by Appalachian writer Gurney Norman, is scheduled to show at the Whitesburg Cinema. The 30-minute film, which was shot in Letcher County, features a cast of local Kentucky, Virginia and Tennessee residents. It stars Frank Hoyt Taylor of Dungannon, Va., and William Johnson of Carbon Glow.

Millstone residents say they don’t want a garbage “cooker” placed at the Letcher County garbage transfer station near their homes. The residents are gathering a petition to keep the county from locating the system at Millstone. There are already three old landfills at the site in addition to the active transfer station.

Whitesburg police and firefighters were called to the Whitesburg hospital three times in one day this week to investigate bomb threats. Officials and firemen searched the building and grounds, but found nothing.

Presbyterians will hold a memorial service for the Sandlick Presbyterian Church next week. The church is closing after more than 40 years of existence.