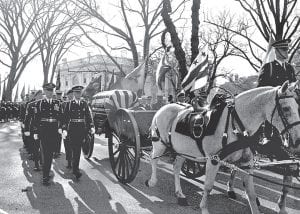 50 YEARS AGO THIS COMING SUNDAY — In this Sunday, Nov. 24, 1963 photo, a horse-drawn caisson bearing the body of President John F Kennedy heads from the White House (background) to the Capitol for Kennedy to lie in state. Former Letcher County Sheriff Ben B. “Buster” Taylor, shown second row left, walked beside the caisson as a representative of the Green Berets. Taylor, who died in December 2007, held the rank of sergeant first class at the time of Kennedy’s death. Like JFK, Taylor is buried in Arlington National Cemetery. (AP Photo)

The following report appeared in The Mountain Eagle after the funeral of President John F. Kennedy, who was assassinated on Nov. 22, 1963 and buried three days later.

Sgt. 1st Class Ben B. Taylor, son of Mrs. Mattie Taylor of Millstone, was in a group of 20 men who went from Ft. Bragg, N.C., to Washington, D.C., for the funeral of President John F. Kennedy.

He served as an honor guard in the procession going from the White House on Sunday to the Capitol rotunda. He marched beside the caisson bearing the President’s body on Sunday and again on Monday. When the cortege reached Arlington cemetery, the Special Forces Group, which included Sgt. Taylor, stood by the grave site where the Kennedy family, statesmen and kings and queens walked to the President’s grave.

Sgt. Taylor, who is now stationed at Fort Bragg, recently returned from Vietnam. He is with the Special Forces Group in the Army.

After returning from Washington, he called home and said words could not express the deep respect and sorrow shown for the President.