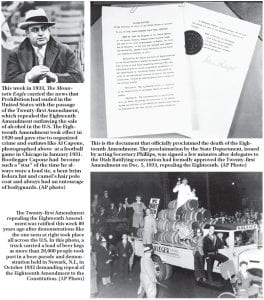 On Tuesday, the Twenty-first Amendment to the U.S. Constitution was officially ratified, repealing the Eighteenth Amendment that outlawed the sale of alcohol in the U.S. when it took effect Jan. 17, 1920. The passage of the Twenty-first Amendment marks the first time in U.S. history that a Constitutional amendment has been repealed. Delegates for Kentucky, which was the third state to ratify the Eighteenth Amendment on Jan. 14, 1918, voted 20-18 to repeal it on Nov. 7. The Eighteenth Amendment was officially repealed when the new amendment was ratified by Utah on Dec. 5. Writes Mountain Eagle editor and publisher Nehemiah M. Webb: “With the death of the dry law, if dry it was, Kentucky stands about today as it stood in 1920.”

“Because of the poor market for coal, several of the mines in the Fleming and Jenkins field are closed down or generally working very slack,” says a story on the front page of The Mountain Eagle. “[The county] is again full of people without work when the winter and the scarce season are on hand. A few weeks ago, the goose was hanging high and working people were slowly coming out of the dark valleys toward higher ground, but now it looks like the goose is down on the ground again.” 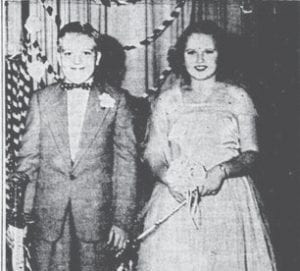 This week in 1953, The Mountain Eagle featured a photo taken a few weeks before when young students Owen Wayne Wright and Mary Lynn Gentry were crowned prince and princess of the Halloween Carnival held at the Whitesburg Elementary School Auditorium. Today, Wright owns and operates the Western Auto store in downtown Whitesburg.

Playing in its first season, the Eolia High School basketball team surprised the Whitesburg team Monday night by taking a one-point lead in the last minute to win the game by the score of 15-14. On Friday afternoon, the Catamounts again brought home the bacon with another one-point win, this time over Kingdom Come High School, 14-13.

The federal government is rushing to put more than 1,100 unemployed Letcher County residents to work on public works projects this week. The pay is $1.80 for a sixhour day, “and a good six hours of real labor must be performed,” writes Eagle editor/publisher Webb. “It comes at a time when the pickings are scarce,” adds Webb. “Quit whining and cussing the President or anyone else who is trying to open the public purse so that poor people may have a few of the scrimps of life. Besides, it’s better than just giving out doles. It is furnishing honest-to-goodness people something to do and paying them or doing it.” What Webb terms a “great cry of dissatisfaction” occurred in Letcher County when it became clear that rules prevent “anyone from getting work who is related by blood or by marriage to any member of the labor or employment board” or to elected county officials. Because of this rule, Editor Webb has resigned as a member of the labor board, saying “In a county like this where everybody is related to everybody and to all the officers and officers-tobe it looks like only those who have come into the county lately, or colored folks, can work.” 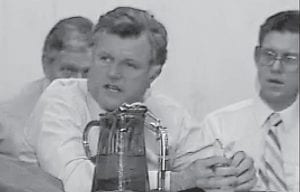 This screen grab of a video recording by Appalshop of Whitesburg shows U.S. Senator Edward M. “Ted” Kennedy during a hearing held in Fleming-Neon during Kennedy’s 1983 tour of Letcher County.

Southern Bell Telephone Company announced this week that because of a shortage of raw materials caused by the war, only “essential users” — those people responsible for public health, welfare, or security — will be eligible for new telephone service.

Ralph Langley Adkins, Electrician First Mate First Class, U.S. Navy, is a prisoner of war of the Japanese. News of the capture of Adkins was received by telegram dated Dec. 1 from Navy Rear Admiral Randall Jacobs to Boaz Adkins of Whitesburg.

Speed Nicholson has purchased controlling interest in the Daniel Boone Hotel of Whitesburg. “The Daniel Boone is known far and wide among the traveling public and has been a great boon to the business and progress of Whitesburg,” says a front-page story in The Mountain Eagle.

Letcher Schools Supt. Martha Jane Potter has taken over a portion of the responsibility of raising the county quota for the war fund drive.

Miss Virginia Rose Maggard, 19, has been crowned Miss Fairfield in a beauty contest held in the Maryland town that is home of the Bethlehem-Fairfield Shipyard. It was the first beauty contest entered by Miss Maggard, sister of Ed Maggard of Whitesburg. Miss Maggard works on the 7 a.m.-3:30 p.m. shift on an assembly table at the yards.

Pfc. Woodie McKinney, a paratrooper, visited his family in Neon during the Thanksgiving holiday.

Six deaths have occurred on Letcher County roads so far in 1953, two more so far than in 1952.

A lawsuit was filed Monday seeking to disqualify Dr. Lundy Adams as a member of the Letcher County Board of Education. The suit was filed by Kentucky Attorney General J.D. Buckman Jr., who alleges that that Dr. Adams violated state law by accepting the position of Republican Party Chairman in Letcher County while holding the office of school board member. The complaint against Adams was originally filed by Dr. E.G. Skaggs of Fleming, who is also a member of the board of education. According to Letcher Circuit Court Clerk W.L. Stallard Jr., the suit is the first-ever filed by the state attorney general’s office in Letcher County.

Fourteen Virginia White Tail Deer have been turned loose in the Pine Mountain Game Reserve. According to local residents D.W. Little and Bill Long, the deer were furnished by the Kentucky Department of Fish and Wildlife and came from Wisconsin. Six more deer of the same type are expected to arrive in Letcher County soon.

The Morehead Teachers College Choir will present the “Messiah” at the Jenkins High School Auditorium on Sunday, Dec. 6. Jenkins Independent Schools Supt. C.V. Snapp says the performance by the 60-member choir will be free to the public.

Owen Wayne Wright and Mary Lynn Gentry are enjoying their new reign as Halloween Carnival prince and princess. The two were crowned earlier this fall at the Whitesburg School Auditorium.

Brothers Pfc. Vernon Maggard and Pfc. Kenneth Maggard, sons of Mrs. Margie Maggard of Partridge, are now serving in the armed forces. Vernon is stationed at Fort Knox. Kenneth is stationed in Germany.

Letcher Countians are benefitting very little from the federal government’s winter relief program. Officials say they do not know when the program will take effect here. The program is designed to provide medical, housing, food and other help to eastern Kentuckians.

An editorial in The Mountain Eagle on the winter relief program says, “Somewhere along the way, our bureaucrats lost sight of the program as understood by (the late President John F. Kennedy) and have come up with a program so totally unworkable that it is kind of a grim joke upon the people of eastern Kentucky.” The editorial says that loans for housing repairs will be guaranteed by mortgages on the 1964 crop — mortgages not available to most eastern Kentuckians. To obtain a loan, says the editorial, the applicant would have to travel 100 miles from Letcher County to Campton. The editorial quotes Letcher County Judge James M. Caudill who said, “This program is not worth a nickel to Letcher County that way,” and adds, “How right he is!”

Another editorial in The Mountain Eagle addresses the issue of the planned community college, which the state legislature had recommended one week be placed in Hazard, and the next week in Letcher County. The editorial says, “The game of ‘College, College, who’s got the College?’ goes on and on, with everyone appearing to enjoy the sport but the people of Letcher County, who feel the state officials and the University of Kentucky are shamefully abusing the desires of mountain people for a college education for their children.”

Vandals caused extensive damage to the consolidated grade school building at Little Cowan. The metal reinforced windows across the front of the building were broken into small shreds, and all plate glass windows were broken. All the small windows in the classroom doors were also broken and sinks in the bathrooms were broken away from the walls causing water to flood the structure. A school bus was vandalized, and food was taken from the cafeteria and much of it was spilled around the building.

The Whitesburg Yellowjackets defeated the Leslie County Eagles 72-66, but fell 75-67 to Allen Central.

U.S. Senator Edward “Ted” Kennedy of Massachusetts wrapped up a nationwide look at the effects the Reagan administration has had on the nation’s poor at a public forum in Letcher County. At hearings across the country, said Kennedy, “we have heard from poverty-stricken families who have all but abandoned hope in this hopeful land.” Fifteen people testified at the forum at the Boone Fork Community Center.

An editorial on Sen. Edward Kennedy’s visit in The Mountain Eagle says, “The Reagan policy divides America into groups with everyone backbiting and suspicious of everyone else. Rich against poor, management against labor, union vs. non-union, workers who are employed and paying taxes vs. the unemployed who receive taxsupported food stamps. Senator Kennedy reminded his audience that he comes from a tradition that calls upon government to help those who are unable to help themselves, and also calls upon each individual to put forward the kind of individual effort that helps build a noble society. It is a vision to which we subscribe.”

Mountain Eagle correspondent Virginia H. Combs says she was warned to be careful backing up her car. She answered, “That is why I’m 82 — by being careful.”

Heavy weekend rains raised creek levels all over the Kentucky mountains. Letcher County escaped heavy flooding, but schools in Perry and Breathitt counties were closed because of high water.

Letcher County’s unemployment rate dropped 2.2 percent from September to October, however the size of the labor force dropped 2.7 percent, indicating the number of people who had exhausted unemployment benefits and had given up looking for a job. The county’s October rate was 10 percent, down from 12.2 percent in September.

Letcher County School Superintendent Jack Burkich said he will send an order to all principals in the county school system stating that students must be allowed to make up schoolwork they missed while awaiting the outcome of investigations into alleged wrongdoing by the students. The order comes about after a Fleming-Neon High School honor student received failing grades on class work he missed while waiting for the principal to investigate a scuffle in which the student was involved. Both boys involved in the scuffle are to be allowed to make up the missed class work.

Two women were arrested on theft and burglary charges after a one-day crime spree in Whitesburg and Hazard. A third woman is being sought on the same charges. Police said the three women stole another woman’s purse and took a credit card from the stolen purse and used it to pay for a shopping trip at Walmart in Whitesburg. The women then stole another purse at Long John Silver’s in Whitesburg and used a stolen ATM card to take $1,100 from a bank account. The three were arrested in Hazard after trying to use the stolen credit card.

An increase in demand and a huge drop in charitable donations is forcing the Letcher County Food Pantry to cut back services to individual families.

The Whitesburg Christmas Parade was held despite heavy rains, cutting wind and cold temperatures which dipped down into the low 20s.

The Letcher Fiscal Court rejected a proposed five-cent deposit on drinks sold in cans and bottles, the second time the “bottle bill” has been defeated in two years.