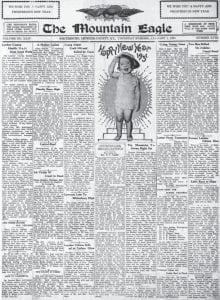 “There were no killings, no criminal conduct and not even a fist fight, so far as heard, on account of Christmas in this county. Soberness seems to have prevailed in every neighborhood, so far as reported. Considering that there are more than 13,000 people in the county, we take this as a highly creditable and commendable record.” — Front page, January 1, 1931.

The new year brought a few changes to the town of Whitesburg. Mullins and Fairchild, leading dry goods and merchants, vacated the Frazier building and moved into their own building. Mr. and Mrs. Mack Norman gave up the Day Hotel near the bridge and located in the Baker home across the street. Attorneys Emery L. Frazier and F.G. Fields and stenographer B.W. Hale moved upstairs in the Lewis building. Attorneys R. Monroe Fields and Stephen Combs Jr. have formed a partnership, with Mr. Fields moving his office from the Wright building to the First National Bank building where Mr. Combs has his office.

As of January 1, there were more than 800 unregistered automobiles in Letcher County. The state has extended the registration deadline to January 10.

The Coca-Cola Bottling Plant of Whitesburg was sold this week to R.M. Brohard and C.L. Kilgore, businessmen from Sergent.

M.L. Webb, postmaster at Mayking, said he is moving the post office from his home and into the town of Mayking, where he plans to enter the mercantile business.

J.W. Davis, 29, of Norton, Va., was found burned to death Wednesday morning at the Daniel Boone Hotel in Whitesburg. It is believed Davis’s bed caught fire from a lighted cigarette. A badly injured Davis was discovered after his screams aroused the night clerk, Joe Potter, who immediately ran to his rescue and summoned an ambulance. Davis died at the Jenkins hospital.

Pistols blazed at a Perry County roadhouse Christmas Eve, killing a deputy sheriff and a patron. Perry County Sheriff Charles Cornett says three men have been arrested and charged with murder. Dead are Deputy James Cornett, 56, an uncle of the sheriff and Henry Kilburn, 27. The troubles stared when Deputy Cornett attempted to take Kilburn into custody on a charge of being intoxicated. Charged with the shootings are brothers Nathan and Girdley Baker and Live Sizemore, all of Perry County.

Private Vernon Vanover, son of Mrs. Ida Vanover of Jenkins, has been promoted to corporal. He is serving with the 3rd Infantry Division of the Fifth Army in Italy.

Mrs. T.M. Perry and Mrs. J.M. Smith, both of Jenkins, were the first persons to use the new Whitesburg Cannery when it opened last week.

Wounded World War II veteran Troy Lucas, who lost a leg in North Africa, is manager of the just-opened Share the Gospel Recreational Center in Whitesburg, above Dawahare’s Department Store.

Letcher County had a 100 percent increase in traffic fatalities in 1953, reports Lovell Williams, director of the Letcher County Safety Bureau. Williams says there were eight fatal traffic accidents on county highways. Other fatal accidents in the county in 1953 occurred in coalmines (2), on railroad tracks (3), by falling tree (1), by electric shock (1), and in a home accident (1). Six Letcher County residents were killed in accidents in other counties in 1953.

Deer hunting, which has been mostly absent in Kentucky since the days of the early settlers, may be permitted in several counties of Kentucky in the next three to five years if the state’s current stocking program continues its success, says the state Department of Fish and Wildlife Resources. Herds are now being cultivated in the Cumberland Forest in eastern Kentucky and on management areas in Letcher, Floyd, Harlan and Logan counties. Approximately 15 to 20 deer have been released in the Pine Mountain Game Reserve near Whitesburg during the past three weeks. Deer hunting is now limited in Kentucky to only one two-week session a year at Kentucky Woodlands Forest in western Kentucky.

John Palumbo, 67, of Whitesburg, died Saturday at Mountain Home Hospital in Johnson City, Tenn., from complications of asthma. Mr. Palumbo, a well-known stone mason whose work can be found throughout Letcher County, was born in Terno, a small town in Southern Italy near Naples. He came to America in 1904 and to Letcher County in 1910, where he immediately took out naturalization papers. He served the U.S. in World War I, participating in the battle of the Argonne Forest where he received permanent injuries caused by poisonous gas.

A Detroit man was killed instantly and two other men were injured when the new Oldsmobile 98 in which they were riding overturned near Isom. Killed was 40-year-old Louis Parkerson. Seriously injured in the accident were Clayce Sexton, 22, and Franklin Frazier, 22, both of Isom.

Ercel “Star” Frazier of Whitesburg has sold the Frazier Hardware and Furniture Store on Main Street in Whitesburg to Lee Adams. The sale took place Wednesday.

Major Charles E. Yeagar’s rocket test plane went out of control and dropped nearly 10 agonizing miles before Yeagar regained control on his historic speed flight Dec. 12, it was learned Dec. 28. Yeagar, to whom breaking speed records is no novelty, hurled his Bell X-1A rocket test ship through the skies at 1,650 miles an hour in the record-setting flight. Informed sources say the plane went out of control when Yeager had climbed to more than 70,000 feet — 13 to 14 miles up — and was rocketing along at a speed at about 2-1/2 times that of sound. Details of what happened to the speedy ship to fling it roughly earthward, if known, are a military secret.

Dave L. Craft of Mayking, who served as superintendent of the Letcher County School System from 1950 to 1954, was named to the post again this week by the Letcher County Board of Education. At a special meet- ing Tuesday afternoon, the board voted 3-2 to hire Craft to succeed former superintendent Sanford Adams, who died of a heart attack Dec. 22. Craft will fill out the final 2-1/2 years left in Adams’s term. His salary will be $9,000 a year as superintendent and $2,000 a year as secretary to the board of education. Adams had received $1,000 a year more. Board members Dr. B.F. Wright and Kern Whitaker voted against hiring Craft, who is a direct descendant of the oldest Crafts in Letcher County. Voting to hire Craft were board members Ray Collins, Arnold Hall and board chairman Kerney Day.

Dr. B.F. Wright was taken by ambulance today to an Ashland hospital after suffering a series of attacks at his home at Seco. His condition is reported to be serious.

Funeral services for Whitesburg pharmacist Fred L. Coffey, 39, were held Sunday at Graham Memorial Presbyterian Church in Whitesburg. Burial was at Green Acres Cemetery. Coffey, who came to Whitesburg in 1953 as a pharmacist for Quillen Drug and later became a partner in the business, died unexpectedly of a heart attack about 3 a.m. Dec. 27 in Theodore, Alabama, where he had gone to visit relatives of his wife. Coffey had been active in civic affairs in Whitesburg, where in 1960 he received the “Man of the Year” award from the Whitesburg Chamber of Commerce for his efforts to obtain roads and a state park for Letcher County. He was also a partner in ownership of the Coffey House restaurant in Whitesburg, which he and his wife and Mr. and Mrs. Cossie Quillen bought in 1962. A former chairman of the Whitesburg Municipal Housing Commission, he shepherded the city’s new housing project and urban renewal project in Graveyard Hollow to the point where they are now ready for the start of construction.

Rep. Carl D. Perkins told a packed meeting of black lung benefit applicants in Fleming-Neon that he plans to see that all black lung cases which had been denied are reopened. Perkins accused the Social Security Administration of “denying justice to thousands of miners and widows” in eastern Kentucky.

Classes at Letcher School are canceled as repairs continue on the Route 7 bridge that collapsed under the weight of a loaded coal truck. Garbage is also piling up as the pickup truck which empties the refuse containers along the road is unable to negotiate the winding road through Roxana to Blackey.

”They say you can tell what kind of person one is by the books he reads,” says Millstone correspondent Mable Kiser. “Well maybe the same is true by the programs we view on TV, as few of us read nowadays.”

Letcher Circuit Judge F. Byrd Hogg has ordered the dismissal of a lawsuit filed by Enoch C. Smallwood of Whitesburg, against the six persons elected to serve on Whitesburg’s council. Smallwood’s suit charged that the results of the election were invalid because the winning candidates filed defective petitions nominating them for office. Smallwood was one of four write-in candidates in the race.

”The Letcher Independent Baptist Church at Jeremiah would have been destroyed by fire Christmas Eve,” writes Jeremiah correspondent Hassie Breeding Helton, “had the Letcher Fire Department not been close by. Flames were spreading rapidly when (the fire) was detected in below zero weather.”

Cowan correspondent Elsie C. Banks and Sara C. Ison, Ice correspondent, both write of frozen water pipes caused by the extremely cold weather. “The widespread, unusual cold weather has brought a lot of damage and suffering in various ways,” writes Mrs. Banks. “There have been lots of frozen water pipes which caused a lot of inconvenience and expense. But for the most part people here have fared well despite the cold weather.” Mrs. Ison writes, “You never miss your water until it freezes up. This did not bother us in the ‘good ole days’ when everyone had a good dug well or spring. When you never have something you do not miss it.”

Letcher Judge/Executive Carroll Smith faced his first week in office with “two graders, two trucks and no rock salt”, and a forecast of up to 12 inches of snow in Letcher County. Not only is the new judge/executive without salt, he is also without money to buy salt.

Terms of Kentucky’s broadform deed amendment would be extended to oil and gas drilling under conditions of a bill which Rep. Paul Mason of Letcher County pre-filed in the General Assembly. Mason is working on an addition to the broadform deed amendment, passed in 1988, stating that where the document conveying oil and gas rights made those rights superior to the owner of the surface property, landowners have the right to determine which method of oil or gas extraction would be used.

The Lady ‘Jackets enjoyed playing in a tournament in Alaska despite losing two of three games. Among the activities enjoyed by team members were riding on a airplane, dog sledding, seeing a moose, and going to a mall.

Unseasonably warm weather teamed with unusually heavy rainfall to create a flood in downtown Fleming- Neon. The warm temperatures were replaced with much colder readings this week, as state highway workers were placed on alert to guard against icy spots forming on Letcher County highways.

The number of miners killed on the job in the United States fell to 55 in 2003, the fewest deaths since the federal government began keeping records in 1910. Twentynine of the deaths occurred in coalmines, while there were 26 deaths in gold, stone and other types of mines. Kentucky had nine coal mine deaths.

Bethlehem Steel Corp., which employed 300,000 people during its World War II heydey, officially dissolved a minute before the new year began. The company, which at one time owned what is now the City of Jenkins and helped introduce strip-mining into the eastern Kentucky coalfields, declared bankruptcy in 2001.