In a worldwide radio broadcast Monday night, President Roosevelt reviewed his first year’s work as chief executive of the nation. Eager listeners from one side of the earth to the other sat in silence as the President said, “Think back a year ago. You know where the banks stood at that time; you know where your own business stood. And if the banks come along, my friends, we will have the three great elements of American life working together — agriculture, industry and the banks. Then we can’t be stopped.”

The Whitesburg P.T.A. hopes to pay off the piano it purchased for the school by holding a food sale each month at the Whitesburg Post Office.

With the closing of the CWA (Civil Works Administration) program in Letcher County, a new program for the unemployed is scheduled to begin not later than April 1.

Anyone who knows the whereabouts of Frank Majority Jr., 15, is asked to contact his parents. Young Frank left the Whitesburg home of his parents, Mr. and Mrs. Frank Majority Sr., on December 24 and has not been heard from since. 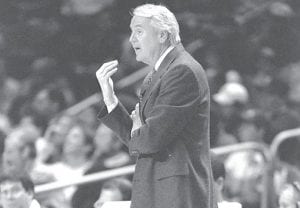 FORMER LETCHER RESIDENT WAS STAR COLLEGE PLAYER, NBA COACH — This week in 1964, William H. “Bill” Blair Jr. led the Virginia Military Institute’s Keydets basketball team to the championship of the Southern Conference. Blair, pictured above in his role as head coach of the NBA’s Minnesota Timberwolves in 1994, averaged 19 points a game to lead the Keydets to their first NCAA Tournament appearance, ending in a 86-60 loss to the Princeton Tigers, then led by future NBA great Bill Bradley. He left Whitesburg in 1956 to attend boarding school at Randolph-Macon Academy in Front Royal, Va. Blair later coached college basketball at VMI and Colorado before becoming a longtime assistant in the NBA. He later served as interim head coach of the New Jersey Nets before taking the job at Minnesota. He finished his NBA coaching career with a 29-79 record.

“From the way the cold winds blow and the chilly rains continually fall, it now looks like March is determined to live up to its old reputation — that of a roaring lion,” a Mountain Eagle weather report says.

Fay Wray and Ralph Bellamy star in “Once to Every Woman,” scheduled to show at the Kentucky Theatre in Whitesburg March 11-12.

Fire of unknown origin took to the life of Wardell Robbins, 30, of Neon, as flames destroyed the Robbins home and badly damaged buildings housing the Bentley Theatre building, Compton’s Shoe Shop and other businesses. The fire occurred Monday night. Robbins, who was married and had a child, had been expected to receive his pre-induction physical examination this week in Huntington, W.Va. The 300-seat theatre and hotel building is owned by Dr. D.V. Bentley. Flames were kept from spreading to other buildings by firefighters with the Neon, Fleming, Jenkins and Whitesburg fire departments.

Two hundred eighty-three (283) Letcher County men who are married and have families were drafted into service recently by Local Board No. 101. The men are being taken to Huntington, W.Va., for examination.

The J.B. Dick & Co. 5 Cents to $1 stores in Whitesburg, Pikeville, Paintsville, Prestonsburg, Campbellsville, Lebanon and Williamson, W.Va., have been sold to R.H. Hobbs, who previously owned one-third of the company. The Pikeville store was the first to open in the chain, some 20 years ago. The Whitesburg store opened February 14, 1929. Each of the stores will now be known as the R.H. Hobbs Co. 5 & 10 Cent Store.

Mr. and Mrs. Jim Vincent of McRoberts have received the sad news that their son, Corporal Charles Vincent, has apparently been killed in action somewhere in Italy. No other information was received.

Army Pfc. Luther Joseph, who is serving in New Caledonia, South Pacific, has been awarded the Good Conduct Medal for exemplary fidelity and efficiency in the line of duty. Private Joseph is married to Edna Joseph, who lives at Premium.

To this date, three soldiers from Blackey have died while serving during World War II. Pfc. Kirby Dixon was killed in action, while Pfc. Vincent Watts and Pfc. Otte Whitaker have died in accidents.

Ray H. Hogg, son of Mr. and Mrs. Charles Hogg of Mayking, is receiving basic flight training as an aviation cadet at the Bainbridge Army Air Field. He is a graduate of Whitesburg High School and Eastern Kentucky University.

A 12-year-old Kona boy was killed Saturday evening when he caught on to the rear end of a truck and was thrown under the wheels. The driver, who was held blameless, did not know the child had gotten on the truck until someone screamed. The child was living with his grandparents because his mother and father are both dead.

Captain Harold Parks, son of Mr. and Mrs. Oscar Parks of Jenkins, has received the following citation from the 503rd Parachute Infantry: “This is to certify that Harold R. Parks jumped in the parachute attack against the Japanese garrison at Lea, New Guinea, on September 15, 1943. Signed, Colonel Kenneth K. Kinsler.” Captain Parks was parachute instructor in Panama for 14 months before leaving for combat duty in November 1942.

Miss Argie DeSimone of McRoberts has won the title of “Miss Cavalier” at Jenkins High School.

Four Puerto Rican nationalists shot down five United States congressmen on the floor of the U.S. House on Monday. Rep. Alvin M. Bentley (R-Mich.) is given more than a 50 percent chance of living after an operation to remove bullets from his lung, liver and stomach. Less seriously wounded were Rep. Ben F. Jensen (R-La.), Rep. Clifford Davis (D-Tenn.), Rep. Kenneth A. Roberts (DAla.) and Rep. George H. Fallon (D-Md.). The four fanatics were booked for assault with intent to kill. The shots were fired from an overhanging visitors gallery after the men shouted for a “free” Puerto Rico.

March roared into Letcher County like a lion on Monday, leaving broken power lines, broken timber, broken communications and 14 inches of snow. This followed heavy rainfalls on Sunday. All of Whitesburg was without power from midnight Sunday until Tuesday morning.

The home of Mr. and Mrs. Dillard Fairchild of Sandlick was destroyed by fire Monday. The fire apparently started in the basement of the home and had burned through the main floor before being discovered by Mrs. Fairchild, who was home alone. Because the heavy snow had knocked down telephone lines, the Whitesburg Fire Department did not reach the scene until the house and an Oldsmobile were burned.

An unusual number of forest fires have hit Letcher County recently, resulting in a “great many” acres being burned over. Forest Ranger Garnet Craft said high winds made the fires impossible to extinguish.

Mr. and Mrs. Logan Collins are receiving congratulations on the birth of a son, Rickey Everett, born March 1 at Sharon Heights Hospital in Jenkins.

An examination for the job of postmaster at Neon will be held sometime after the application deadline of March 31. The position pays $4,770 a year. Applicants must be between the ages of 25 and 62, have two years experience and show they can deal with the public agreeably and effectively.

A brochure prepared by the Kentucky Department of Commerce lists the industrial resources in Whitesburg. Among the items listed are: A 27.4 increase in the population of Whitesburg from 1950; three industrial sites in Whitesburg; the Whitesburg Municipal Airport; the Whitesburg Planning Commission; plans for an urban renewal project including construction of low-cost housing; and the availability of freight service on the Louisville and Nashville Railroad.

William H. Blair Jr., son of Mr. and Mrs. William H. Blair of Whitesburg, led his Virginia Military Institute basketball team to a first-place finish in the Southern Conference. VMI will next play Princeton in the NCAA tournament, making Blair the first Whitesburg boy ever to play in the NCAA. Blair was named to the Southern Conference all-tournament team. He averaged 19 points a game.

A Mountain Eagle editorial addresses the problem of parking in Whitesburg. “Anyway you look at it, traffi c and parking problems in downtown Whitesburg is a mess, and becomes just a bit messier with each passing day,” says the editorial. “A bypass around Whitesburg is becoming more and more an absolute essential, or else the town will stand out as the leading traffic bottleneck in eastern Kentucky.”

The Alene Theater is showing “McLintock”, starring John Wayne and Maureen O’Hara. Also at the theater is “The Man with the X-Ray Eyes” starring Ray Milland.

Letcher County State Rep. Hoover Dawahare was ejected from the floor of the House of Representatives in Frankfort as he fought to obtain for eastern Kentucky a share of the coal severance tax. House Speaker Norbert Blume ordered Dawahare ejected as Dawahare charged the administration of Gov. Wendell Ford was twisting political arms by threatening to take away pet projects from legislators who refused to support the Ford budget. Dawahare had proposed an amendment to the budget that would have given coal counties several million dollars of coal severance tax money.

An editorial in The Mountain Eagle calls Hoover Dawahare “a hero” for his stand on the coal severance tax in the House of Representatives, and says he should be welcomed home with “our high school bands, our fire trucks and all our other parade paraphernalia.”

The Whitesburg Yellowjackets took the 53rd District championship in an overtime win over the Letcher Eagles. The final score was 59-57. Both teams will go to the 14th Region tournament.

Residents of Graveyard Hollow have been successful in getting the Whitesburg City Council to change the name of the area to Westwood. Residents of the subdivision that has been built there said they didn’t like to be in “Death Valley” all the time.

The Letcher Eagles won their first-ever 14th Region tournament game by coming from behind to defeat Knott Central 48-42.

Coal was the only area to record job increases in Kentucky in January 1984, when 200 coal miners went back to work, but the state as a whole had a 20-year rise in unemployment. The jobless rate jumped from 9.1 percent in December 1983 to 11.7 percent in January 1984.

The Letcher Fiscal Court, trying to make up for a projected $180,000 deficit in its annual operating budget, has voted to cut the wages of all the county’s hourly workers by five percent. The fiscal court also voted to stop making salary payments to five employees.

Mr. and Mrs. Danus Whitaker of Premium, will celebrate their 50th wedding anniversary. They were married March 15, 1944, on Doty Creek by Elder Alva Caudill.

Mountain Eagle columnist Ike Adams says he was left cold by the Winter Olympics. His son, however, is looking for an old bathtub to begin practicing for the bobsled event in the 1988 Olympics.

Jim Cornett writes of Bill Long, who was the Letcher County game warden in the 1940s and 1950s. According to Cornett, Bill Long would show up at the most embarrassing moments and would catch many game law offenders — most of them hunting out of season.

The Jenkins City Council unanimously approved an ordinance to annex 80.52 acres along US 23 after City Attorney Randall Tackett conducted the second reading. The city may now begin steps to construct a welcome center on the overlook there so Jenkins and Letcher County can capitalize on tourism from Route 23.

Two Letcher County residents will receive Governor’s Awards in the Arts in a ceremony at the Capitol Rotunda in Frankfort. Bill and Josephine Richardson will receive Milner Awards.

After an absence of more than 20 years, The Little Shepherd of Kingdom Come outdoor drama will resume in Letcher County.