John C. Howington of Jenkins has been killed in action somewhere in the Pacific. Jim Howington was notified of his son’s death by a telegram received June 30.

Rescue crews brought 18 miners to surface July 1, shaken but alive, from a mineshaft at the Ridgeway Darby Company, located 15 miles east of Harlan. The miners had been trapped for 17 hours by a fire of unknown origin.

Noah Gibson of Jackhorn has announced the sale of 1,000 acres of his timberland in the Upper Rockhouse and Mill Creek sections of Letcher County to South East Coal Company. Sale price was not disclosed. Cutting of the tract, which includes hardwoods, has been started to supply mining timbers and props for the coal company.

The 1944 Kentucky State Fair will be held August 28 through September 4 at Churchill Downs in Louisville, officials have announced.

New York Governor Thomas E. Dewey received a hero’s welcome from the Republican National Convention in Chicago, where he received his party’s nomination for President of the United States. Dewey predicts the results of the November election against President Franklin D. Roosevelt “will bring and end to one man government in America.” 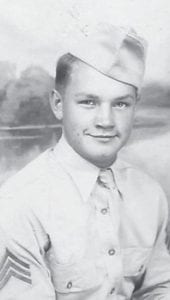 James M. Caudill of Neon has purchased the Francis Hotel from Mr. A. B. Francis. Caudill is postmaster at Neon.

Tech Sgt. John W. Franklin was wounded in France on D-Day after being engaged in battle for eight hours. He is expected to recover soon and return to his battalion. He is the son of Mr. and Mrs. Ben J. Franklin of Millstone.

Miner David C. Carey, 42, was killed in a slate fall inside a Consolidation Coal Company mine at Jenkins on July 3. Mr. Carey came to Jenkins from Tennessee to work in the mines four years ago. His wife and four children survive. Burial was in Potter’s Cemetery at Jenkins. 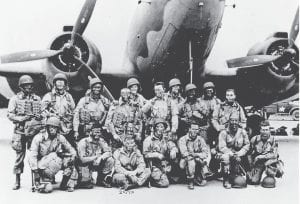 FROM 1944 — This photo shows Pvt. Raymond Smith, seated third from left, with the other members of his paratrooper jump crew after the D-Day invasion of France in WWII. The July 6, 1944 edition of The Mountain Eagle carried the news that Smith, of Thornton, was the first Kentuckian to touch French soil during the June 6, 1944 event. Smith’s widow, Irene Smith, and daughter, Liz Simon, now live at Mayking.

Reports on the war indicate the Allies are winning on all fronts although German “robot planes” are doing quite a bit of damage in the City of London. The Japs are being driven from the Island of Saipan, where the Americans are establishing quite a firm foothold.

Radio reports say that 60 coal miners are trapped in a burning mine in Ohio with little hope held for their safe recovery.

Kentucky’s reorganized State Highway Patrol will be given an intensive course of training during the month of July. Instructors, including a former FBI agent, will teach officers how to handle firearms, protect themselves hand-to-hand, how to administer first aid, and the legal limitations of their work and duties. The new patrol consists of 150 officers.

Floren Duncil and Theodore Sexton, both members of Camp Branch families, are with the invasion forces in France. Two other Camp Branch boys, Seaman Elmer Bates and Marine Pvt. James Sexton, are fighting in the Southwest Pacific.

A public hearing is set for July 14 at 9 a.m. Central War Time in the Letcher County Courthouse. The hearing has been called by the Ancillary Receivers in the case of Bank of Mill Creek versus The Elk Horn Coal Corporation. The receivers were court-appointed on August 22, 1940.

1st Lt. Charles Ray Blair of Letcher County, a member of the Carey’s Mob Squadron, a unit of Holt’s Hun Hunter Group, was awarded the Air Medal, the first and second bronze oak leaf cluster, in recognition of his meritorious service in aerial combat. Blair is a P-47 Thunderbolt fighter-bomber pilot.

This week marks the 38th anniversary of the establishment of The Mountain Eagle. “During these 38 years the Eagle has witnessed many victories and defeats,” says a report marking the anniversary. “In fact, the Eagle itself has had the bitter taste of bankruptcy, receivership and dozens of other troubles and worries. But we are happy to state that despite wartime conditions the paper is now on an even keel with the best of weekly newspapers. Nehemiah M. Webb founded the paper in 1907.”

Logan Collins of Letcher County, a paratrooper in the European Theatre, has received a promotion to the rank of sergeant.

“On Monday night one of the largest and most representative crowds yet to assemble with the Letcher County Development Association gathered at the Fleming-Neon Grade School Auditorium for the purpose of furthering plans and offering enticements to factories to come to Letcher County and give our failing economy a lift,” says the lead story in The Mountain Eagle. The Development Association hopes to raise $60,000 to construct a building to house a factory, probably to be located at Seco. Attendees at Monday’s meeting pledged $18,000 toward that effort.

Letcher Schools Supt. Dave L. Craft has filed an injunction bond and motion for a temporary restraining order preventing members of the Letcher County Board of Education from allowing William B. Hall to take office as county school superintendent for the next four years. Meanwhile, Hall has announced he will take office July 1. Hall was hired last week when the board met with a newly appointed member who gave the majority vote to those opposed to Craft keeping the position.

Capt. James W. Witt of Whitesburg was congratulated in Sendai, Japan after receiving and Oak Leaf Cluster to his Commendation Ribbon. The son of Mr. and Mrs. James Witt of Whitesburg received the cluster in lieu of a duplicate ribbon for meritorious service as corps radio officer from May 1953 to May 1954. He has been in the Far East since 1952, and also wears the Asiatic-Pacific Campaign Ribbon and Korean Service Ribbon among others.

The new Miners Memorial Hospital is closer to getting built in Whitesburg. The major part of the grading of the hospital grounds on the site of the former Jenkins Farm in East Whitesburg is complete and awaits the approval of grading engineers. The hospital’s design has already won a national architecture award.

Otis Mohn has moved into the role of president of the Whitesburg Rotary Club. He succeeds Lewis Ammerman.

A new storeroom in Whitesburg recently remodeled by new owner Willie Lucas has been leased to Edith and Arnold Collins for a furniture store. A front-page story in The Eagle says the building, purchased by Lucas at a court sale and located across Main Street from the Methodist Church, is seen as a welcome change from the past types of businesses that were located there, most recently the Southern Hotel. The storeroom is now paneled in pine and is a thing of beauty, with asphalt tiling on the floor.

Rev. Francis Cordrey has arrived in Whitesburg to begin his duties as associate pastor to the Rev. Clel B. Rogers at First Baptist Church in Whitesburg. Cordrey is now living in Caudill Town with his wife and three children.

A photo appearing in this week’s Eagle shows Miss Carlene Webb, daughter of Mr. and Mrs. Critt Webb, and Mr. James Gose, son of Mr. John Gose and the late Mrs. Gose, after their marriage ceremony conducted June 11 at the home of the bride’s parents.

The final transfer of the Miners Memorial Hospital to Appalachian Regional Hospitals Inc. has been made. Five of the hospitals, including the Whitesburg Hospital, were transferred to ARH in October 1963. Trustees of the Miners Hospital Association discontinued the chain of hospitals because of a diminution of royalty payments to the fund, which financed their operations.

The Letcher Fiscal Court has refused to settle tax matters with Sheriff Lewis Hall. Hall, a Republican sometimes mentioned as a possible candidate against Democratic Judge James M. Caudill in the next county judge’s race, said he is being mistreated for political reasons. Hall said only eight percent of real estate taxes and seven percent of personal property taxes are uncollected. He argued this is not a bad percentage in view of the county’s depressed economic situation.

”The Girl He Left Behind” starring Tab Hunter and Natalie Wood is being shown at the Alene Theater in Whitesburg. Also being shown is “The Left Handed Gun” starring Paul Newman.

The Whitesburg City Council has decided it will not hear any more complaints concerning city police. Instead, it was decided that anyone with a complaint should present it to the police commission in writing. Several parents attended the city council meeting to complain about the treatment of their sons by city police.

A Mountain Eagle editorial calls the refusal of the Whitesburg City Council to hear complaints about city policemen “a sorry mess.” The editorial says, “If conduct of city police is not a citizens’ affair, then what is it? In a democracy, if you cannot talk about police with the city officials, then democracy ceases to exist. If you can’t talk about police, then you are in a police state.”

Despite a record 127,507,320 tons of coal mined in Kentucky in 1973, statistics compiled by the Kentucky Department of Mines and Minerals show trends toward fewer miners and fewer mines. Four hundred fewer miners were employed in the state in 1973 than in 1972.

Twenty-five percent of the babies born in Letcher County are born to girls less than 19 years old, according to Melissa Newell of the Maternal Infant Program at Whitesburg Appalachian Regional Hospital. She said only half the women who have babies before they are 18 graduate from high school, and men who become fathers before they are 18 are 40 percent less likely to finish high school. Teenage parents — largely because of lack of education — are frequently unable to find jobs, she said, and their family incomes tend to be much lower than incomes of other families.

The Jenkins school board has adopted a plan to extend the school day from six to seven class periods. In addition, collegebound students are to be afforded the opportunity to earn up to four additional credits before they graduate.

Dale Middleton and Charlie Cissel, both of Gordon, are instructing Mountain Eagle readers in catching and cooking snapping turtles.

The Coon Club of Southeastern Kentucky is holding a night hunt and bench show at the Cowan Community Center. Winners of a bench show held May 26, 1984 were Black Ky. Bandit, a male dog owned by Greg McCall of Cromona, and P.R. Smith’s Black Beauty, a female dog owned by Carroll Smith of Whitesburg.

Kentucky’s new seat belt law will take effect July 15, 1994. Kentucky is one of the last states in the country to have a mandatory seat belt law.

Special Prosecutor Paul Richwalsky Jr. has requested that the trials of seven defendants charged in a local government corruption investigation be moved out of Letcher County.

Forty-four people attended a reunion of former employees of Bethlehem Steel Corporation’s Mine 22 at Deane. The reunion was held at Fishpond Lake.

The Letcher County Board of Education voted to seek additional funds to expand the size of new gymnasiums at Martha Jane Potter Elementary and Cowan Elementary Schools to include seating for spectators.

Drug crimes account for half the indictments returned so far this month by the Letcher County Grand Jury. Eight persons are charged with drug crimes ranging from selling prescription narcotics to cultivating marijuana.

Sewage from numerous illegal straight pipes is contributing to water quality problems along the section of the North Fork of the Kentucky River upstream of Chavies, according to the Kentucky Division of Water and the Cabinet for Health and Family Services, which issued a warning against swimming in the river.

The Cowan Community Center was one of 20 homes and buildings in Big Cowan and Little Cowan that were flooded July 2 after a “cloudburst” dumped up to eight inches of rain in the area. The Little Cowan community was flooded twice before already this summer.