The ‘Bible ladies’ and the day the Sycamore School burned 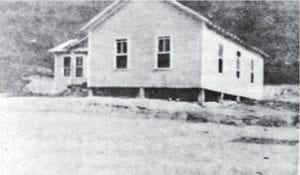 The Letcher County School System’s Sycamore School was located at Jeremiah before fire destroyed it in spring 1956.

We students knew Helen Neihburg and Helen Johnson as the “Bible ladies.”

They came to the many schools in the area once a month to tell stories from the Bible. Although they arrived together, the two Helens visited separate classrooms. At the beginning of each visit, they hung a poster board-sized sheet of flannel cloth on the chalkboard. As a new character or event in their story was introduced, they placed another paper cutout on the flannel cloth for visual emphasis.

For example, by the end of the story about the birth of Jesus, the flannel would be covered with angels, shepherds, sheep, wise men, camels, donkeys, Mary, Joseph, and Baby Jesus. These stories kept my undivided attention for two reasons: One, the Bible ladies were good storytellers. The other reason was curiosity: What kept the paper cutouts from falling to the floor?

I knew from personal trials that my sister’s paper dolls would not stick to a sheet hanging on the wall at our house. So why did the Bible ladies’ paper cutouts stick? Was it one of those Biblical miracles that they talked about? Bashful me finally asked my third grade teacher. She said the flannel that was pasted to the back of the cutouts stuck to the flannel hanging on the chalkboard — an early version of Velcro.

Most of the Bible stories that I know today, I learned from the Bible ladies. They were at Sycamore School the day it burned in the early spring of 1956.

The Helen that was in the Big Room noticed smoke coming from the heating vent in the floor and alerted the teacher, Mr. Vincent Caudill. He and fellow teacher Mrs. Billie Jean Smith had us students practice fire drills earlier in the school year.

On the day of the fire, Mr. Caudill stuck his head into our room and said something that I did not understand. Obviously, Mrs. Smith did, because she had us practice another fire drill. I did not know the building was really on fire until we stepped off the porch and saw smoke coming through a foundation opening by the steps. The school’s furnace in the basement was the source of the fire.

In 1956, cell phones had not yet been invented, landlines were not common, and local fire departments had not yet been established. The Bible ladies jumped into their blue van and drove to the nearest phone, which was at Jonah Caudill’s home (as I recall).

They called the Whitesburg Fire Department, but because of the distance from Whitesburg and the time that it would take for the fire trucks to arrive, the city fire department opted not to come. The Bible ladies returned to the school with the bad news and stood with the rest of us as the school building continued to burn. After the flames burned through the side of the building, the teachers sent us home.

Like most other families around, my family was materially poor. We took care of what little we had. If we lost something or tore something up, we did not get a replacement. I had just gotten a blue cap that I liked rather well. While standing outside shortly after evacuating the burning building, I became quite anxious about my cap. The need to take care of my things was so ingrained within me that, in the confusion of the moment and with the poor judgment of an eight-year-old, I sneaked away from my group and reentered the school building for the purpose of retrieving my cap.

The flames of the burning building were not yet visible and my classroom was still free of smoke. A couple of steps into the room I noticed that my cap and all the coats were gone from the closet across the room. Back in those days, classroom supplies were nearly nonexistent. Just a few days before, our classroom had gotten a gallon jar of white paste that we students were making good use of. I saw this jar of paste sitting on the bottom of the closet and I had an urge to grab it before leaving the room, but, for some reason, safety-first finally entered my thinking process. So, hurriedly, I left the building before anyone could come looking for me, and I rejoined my group. I asked my teacher, Mrs. Billie Jean Smith, the whereabouts of my cap, and I was greatly relieved when she told me that she had picked it up along with all of the students’ coats as she left the building.

Thank you, Mrs. Smith, for rescuing my cap. And our coats. And for being a good teacher.

The 1955-56 school year was completed in the Virgie Stacy house, which was an older T-shaped building. Its front porch faced the creek and the road at the time the house was built. (Later, KY 7 was built behind this house.)

Virgie Stacey, who lived there, had moved her furniture from the other rooms into this dining/kitchen area and lived there while her house was used as a school. The Virgie Stacy house still stands, although the kitchen/ dining wing has been torn down.

Tony Blair is a retired schoolteacher living at Jeremiah.