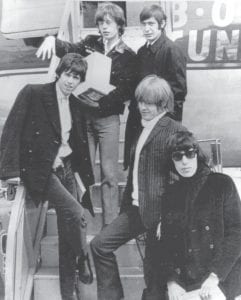 The pool is still there. It’s shrouded by palm fronds and heavy gates, but it’s there. Stand on Pierce Street, beyond the walls of the Fort Harrison Hotel, and you can hear families splashing, even smell the chlorine.

Close your eyes and picture this pool a half-century ago. Picture the Rolling Stones, then a scrum of scrawny Brits in lounge chairs, smoking cigs and scratching out a song that would change the course of music.

Depending on the legend you believe, it was here, 50 years ago while in town for a concert on May 6, 1965, that Keith Richards and Mick Jagger wrote “(I Can’t Get No) Satisfaction.” It’s the Rolling Stones’ signature song and one of the most enduring rock singles ever recorded.

Richards supposedly composed that one-of-a-kind riff while half asleep in his sixth-floor bed, and Jagger banged out those eyebrow-arching lyrics in 10 minutes by this very pool.

Did it really go down that way? Well, the truth is fuzzier than the distortion on Keef’s mighty Gibson Les Paul. That hasn’t stopped Stones fanatics from retelling the tale time and time again — and given the song’s impact over the last five decades, why should it?

This may be Tampa Bay’s most indelible mark on rock ‘n’ roll history.

Memories get foggy after 50 years, especially when it comes to the Stones. For some clarity, you have to take a step back.

At the beginning of 1965, the Stones were arguably the world’s second most popular rock band. Yet the 20-somethings had an edge, a darkness, a swagger that made them feel more dangerous than the Beatles.

They surfed into Clearwater behind a tsunami of hype, including a May 2 appearance on Ed Sullivan, and organizers of the concert at Jack Russell Stadium were prepared for an onslaught of teenage rabidity. Sure enough, the pandemonium got so intense that the plug was pulled after just four songs, with screaming fans storming the stage, the band fleeing for safety and one city official swearing, “There will never be another show like this as long as I am here.” The Stones skipped town the next day.

How, in the midst of all this, did “Satisfaction” enter the picture?

Every version of the story agrees on a few basics: Richards awoke from his slumber, grabbed an acoustic guitar and cassette recorder, hammered out that original riff — dunt-dunt, da-dadunnn, da-da-da-da-da — and then fell back asleep, capturing 40 more minutes of snoring. He then played the song for Jagger, who wrote the lyrics by the hotel pool.

“Satisfaction was a typical collaboration between Mick and me at the time,” Richards wrote in his 2010 memoir Life. “I would come up with the song and the basic idea, and Mick would do all the hard work of filling it in and making it interesting.”

The most popular account is that the riff and lyrics both originated at the Jack Tar Harrison Hotel, later known as the Fort Harrison Hotel, which since the mid ‘70s has been part of the worldwide spiritual headquarters of the Church of Scientology. Their stay here May 6 is well documented through vintage photographs and newspaper reports.

However, former bassist Bill Wyman’s 1990 memoir A Stone Alone mentions only one Clearwater hotel by name — the much tinier Gulf Motel at 419 Coronado Drive in Clearwater Beach. This, he writes, is where the Stones bunked the night before the Jack Russell gig. This seems unlikely — why would such a big band switch hotels mid-stay? — but then again, Wyman is a lifelong diarist generally considered a reliable Stones source.

A third theory arose with Richards’s memoir. While he admits playing the riff for Jagger in Clearwater, he leaves the impression that his mystical midnight recording might have taken place well before Florida, back at his flat in London. This new alternate history, since repeated in other books, came as a surprise even to those closest to the band.

“I believe that the London version of events first appeared with Keith’s Life,” the song’s producer, Andrew Loog Oldham, wrote in an email to the Tampa Bay Times. “Until that time, Clearwater was the given location by Keith. In any event, even the Scientologists believed it to be true. When they took over the premises, they are supposed to have had the room, supposedly on the 6th floor, ‘cleaned’ of the Rolling Stones’ influence.” (Inquiries to the Church of Scientology on this matter received no reply.)

Oldham was there less than a week later, when the Stones laid the track to tape in Chicago and Los Angeles, and remained a close collaborator for years. Yet even his testimony might not convince every Stones diehard of the truth.

Take Cathy Kingsley. She has been to 50 Rolling Stones concerts all over the world, and owns a minimuseum of Rolling Stones memorabilia. She has read all the books. And on at least a half-dozen occasions, she has come from her home in Bradenton to Clearwater, usually with fellow fans in tow, to pay homage to the place “Satisfaction “was born.

“We all have our little meccas,” she said.

Kingsley, 61, is faithful to Wyman’s version of events, and to her that means Satisfaction was born at the old Gulf Motel. She counts among her prized Stones possessions several key fobs and fixtures from the old inn, including a light from the room where Richards supposedly slept.

“Over the years, the Stones have always said it, Mick has said it, Keith has said it: Bill’s our go-to guy for whatever went on, because he kept track of everything,” she said.

Time, however, has a way of smudging the fine print of history. The Gulf Motel evolved over the years, becoming the Gulf Beach Motel and, later, a parking lot for a neighboring hotel, the similarly named Gulf Beach Inn at 415 Coronado. In one of those oddly timed spins of the cosmos, the Gulf Beach Inn itself was closed down on May 8.

What if Wyman was mistaken? What if this was one fact he got wrong?

“There’s just so much out there, when you go back to check facts and everything,” she said. “It’s become like an urban legend. And there’s nothing wrong with that. But we know it was not too far from where we’re talking. And that’s the important part.”

So the Rolling Stones wrote “(I Can’t Get No) Satisfaction” in Clearwater. Five decades from now, what will that fact mean?

Start with what it meant for the Stones. “Satisfaction” was released in June 1965 and topped the American charts by July, the band’s first international No. 1. Before, they were upstarts. After, they were superstars.

“The Stones graduated from being apprentices of the blues to being on the vanguard themselves,” said Andrew Grant Jackson, author of 1965: The Most Revolutionary Year in Music. “It synthesizes so many different elements — the Motown soul stuff, the Dylan folk stuff, the new technology with the fuzz box.”

On Rolling Stone’s list of the “500 Greatest Songs of All Time,” “Satisfaction” came in at No. 2, and that might be selling it short. (No. 1, for the record — see if you can keep this straight — was Bob Dylan’s “Like a Rolling Stone.”) “Satisfaction’s” searing lead lick; fight-the-man lyrics that sizzle with sexual need; fuzzed- out production that lassoes the blues and whips it toward the punk generation — 50 years on, “Satisfaction” still sounds and feels raw, relevant, untouchable.

“You would give anything to be able to cover that song, but you can’t — and you shouldn’t,” said Grammy nominated country singer and guitarist Hunter Hayes. “There is something so iconic about the guitar playing, the guitar parts, the tones — absolute classic. That is the definition of rock ‘n’ roll.”

It became one of those rare songs so ubiquitous it towers not only above the rest of their music, but above popular culture as a whole, like Led Zeppelin’s “Stairway to Heaven” or the Bee Gees’ “Stayin’ Alive.” “Satisfaction” is not just a rock song; it’s the rock song, as inextricable from the concept of rock ‘n’ roll as denim and leather jackets.

How many songs like that have a physical, verifi- able birthplace? How many dots on the map can lay claim to siring a single that changed the course of modern music?

And much like the Rolling Stones themselves, the legends shamble on.