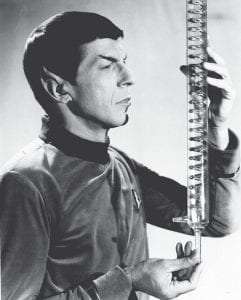 With ‘Star Trek’ airing its final episode on NBC on June 3, 1969, actor Leornard Nimoy will no longer be irritated by his makeup. Nimoy, the half-Vulcan, halfearthling scientist Spock of the television series is shown in this May 11, 1967 photo. His pointed ears were built up with bits of plastic, and no matter how carefully it was done, the ears were rubbed sore as he moved. (AP Photo)

Thursday, June 4, 1925 Jim Anderson was seriously, if not fatally, injured in a mine motor accident. He was taken to Jenkins hospital.

. Like other things that lay in the path of progress in Whitesburg, the KY Hotel was torn down this week by workmen with axes, saws, hammers and crowbars. The old Main Street monument was built half a century ago. “True, real progressive people are glad to see it go,” notes Mountain Eagle editor Nehemiah M. Webb, “but it is sad to realize that old monuments like these have nearly all faded away and gone.”

. John Dailey, the big engineer who sits at the window on passenger trains running from Lexington to McRoberts, has been in this service for 18 years and has taken into his hands the lives of millions of passengers and never had a single wreck. Dailey was again at the wheel of Engine Number 1 Tuesday morning as few, if any, of his passengers thought of whose hands would guide their lives after they stepped on the train. 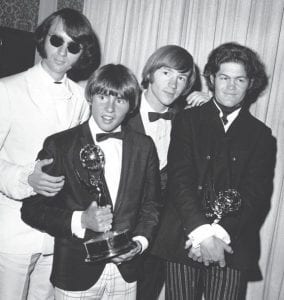 This June 4, 1967 photo shows The Monkees posing with their Emmy award at the 19th Annual Primetime Emmy Awards in California. The group members are, from left to right, Mike Nesmith, Davy Jones, Peter Tork, and Micky Dolenz. (AP Photo)

. A.C. Slemp, an official with the Elkhorn Junior Coal Company of Millstone, was a visitor in Whitesburg on Sunday.

. Candidates are cordially invited to speak at “Blackey Day” on June 18. Each can speak as long as he wants as long as he pays $10 to the committee in charge of the event to fray the expenses of the day. The fatted calf will be killed, the pig roasted, and other good eats served free. The Whitesburg brass band will be present to provide the music.

. Professor Vernon P. Martin has resigned his post as superintendent at Seco-Millstone School to accept a job as dean at Witherspoon College at Buckhorn.

. The largest crowd in the 51-year history of the Kentucky Derby attended the thoroughbred race at Churchill Downs in Louisville on May 16. The crowd, estimated at between 75,000 and 80,000, watched Kentucky-bred Flying Ebony, a black colt owned by Gifford A. Cochrane, defeat favorite Quatrain for the $52,950 first-place money. Flying Ebony, who had never raced the Derby distance before, entered the race lightly regarded and was placed in the nine-horse “field,” but the odds to win were lower than expected after betters put their money down in favor of the horse’s jockey, Earl Sande. John E. Madden is the breeder of Flying Ebony. Madden’s Hamburg Place now has four Derby winners, including the first Triple Crown winner Sir Barton. Cochrane, a New York carpet manufacturer, who also owns the horse Conventry, won the Preakeness Stakes at Pimlico. [The Preakness was run before the Derby 11 times.]

Thursday, June 7, 1945 Private Bruce Fields of Smoot Creek died of wounds received in battle on April 14. He was serving under General Douglas MacArthur in the Philippines and was with the first troops to land there. Fields, a son of Corbett Fields and Becca Jane Fields, who is now Mrs. Floyd Back of Cincinnati, was hit by Japanese mortar fire while participating in an attack on what is known as Hill 506 in the town of Darawan, Luzon, Philippine Islands. He was unconscious when aid men reached him and died a few hours later at a hospital. He was buried in the Armed Forces Cemetery at Santa Baarbara in Central Luzon.

. U.S. Marine Corps Private Prewitt Hoffman, son of Sallie C. Hoffman of Whitesburg, sustained shrapnel wounds of the legs in action against the enemy at Okinawa Island, Ryukyu Islands. He has been hospitalized since May 7.

. As if you needed proof that “Leonard” in a popular name in Letcher County, five of them dined Saturday at the Adams Hotel in Whitesburg. They were: Leonard Collins, Leonard Sergent, Leonard Crase, Leonard Stallard, and Leonard Stallard Jr.

. The Lewis Building, rated as some of Whitesburg’s best property, will be sold at auction on Saturday, June 16. The two-story brick building stands in the heart of the city, and consists of a large lot extending from Main Street to Hays Avenue.

. In a front-page advertisement introducing him to Letcher County voters, Noah Gibson, a Republican candidate for county judge says, “This is Noah. Not the Noah that built the Ark of old, but the Noah that has come up the hard way — that has laid the lash to the oxen in the log woods, that has sold coffee, bacon and lard in the grocery store (when I could get it!).”

. Private First Class Ted Marcum is expected to return to Whitesburg this week. He fought in the South Pacific and was wounded in the Battle of Luzon.

. Word has been received that Lieutenant John Salyers of Jenkins, formerly reported as missing in action, has been liberated from a German prison and is on his way home.

. Mrs. Dorothy Baker of McRoberts has received word that her husband, Staff Sergeant Edsel Barker, who has been a prisoner of war, has been liberated and is awaiting transportation home.

. Major Marcus W. Adams, son of J. Wash and Cornelia Adams of Whitesburg, has been awarded the Silver Star for gallantry in action.

. Sergeant J.D. Johnson Jr., son of Mr. and Mrs. J.D. Johnson of McRoberts, is the recipient of the Bronze Star Medal for heroic achievement in action on October 13, 1943, in Bombiana, Italy. The light tank operator who bravely fought off the enemy after an attack is recovering from wounds in Norfolk, Virginia.

. Private First Class Woodrow Caudill, son of Mr. Watson E. Caudill of Whitesburg, is returning home from action after being awarded the Purple Heart for wounds received in combat, the European Campaign Ribbon with two battle stars, and the Combat Infantry badge.

. Three Blackey soldiers have been liberated from German prison camps. They are Private First Class Ralph

. Private Ernest Brown of Blackey was wounded in action in Germany in March and is now back in the United States. He is expected to be home soon.

. Private First Class Venon Boggs of Kingscreek returned home on a 65-day furlough on May 23 after being held prisoner by the Germans for four months.

. Private Willie Martin of Blackey was presented with the Purple Heart after being wounded in action in Italy in April. The medal is already in the hands of his wife here.

Thursday, June 2, 1955 Dr. Joseph J. Doney has been appointed as administrator of the Whitesburg Memorial Hospital. The hospital is one of 10 now under construction to serve primarily the beneficiaries of the United Mine Workers Welfare and Retirement Fund.

. Former Letcher County Sheriff Hassel Stamper has accepted a position with the Johnson Funeral Home located on West Main Street in Whitesburg in the former M.D. Lewis home. Mr. Stamper will assist C.H. Baker of Hazard, who is a licensed embalmer.

. Pigman Brothers Cleaners of Whitesburg has joined a nationwide drive in which American flags will be cleaned without charge in return for the owner’s promise to display the colors on Flag Day, June 14.

. The Central Appalachian Section of the American Institute of Mining and Metallurgical Engineers will hold its spring meeting in Lexington June 10 and 11. G.O. Tarleton, president of Consolidation Coal Company of Jenkins, made the announcement.

Thursday, June 3, 1965 A small plane apparently disintegrated during a severe storm above Letcher County and crashed, killing a North Carolina couple. Residents of Van heard loud noises and phoned officials telling them they feared a plane might have crashed. After a search that lasted all night, the plane and the bodies of the couple were found on a mountaintop near a strip mine operation.

. Residents of Knott and Perry counties attended meeting in Hindman to discuss strip mining. The group decided to form a cavalcade of automobiles to visit Gov. Edward T. Breathitt in Frankfort to protect strip mining.

Thursday, June 5, 1975 About 25 young people were arrested and charged with disorderly conduct and inciting a riot at the McRoberts Community Center. The youths and their parents charged that the arrests were illegal and that sheriff ’s deputies had provoked the incident with foul language and a show of arms. Officers denied the allegations.

. Jenkins Mayor Jess Bates reported he had met with federal officials to apply for federal funds to help pay for damages resulting from flooding. He said he hoped part of the money could be used for dredging some of the streams in Jenkins.

. The Letcher Fiscal Court was blocked by Circuit Judge Byrd Hogg from collecting a proposed county tax on coal. Hogg granted a temporary restraining order requested by four coal companies who claimed they would suffer “irreparable damage” if taxed.

Wednesday, June 12, 1985 Two nephews of Casper Collins were charged in the murder of Casper and Marie Collins at Colson. The elderly couple were shot to death in an apparent robbery.

. Unemployment in Letcher County fell below 20 percent in April 1985, but the county continued to have the state’s highest rate of joblessness. The jobless rate for the county was 18.4 percent.

. Country singer Steve Young is scheduled to perform at the Appalshop in Whitesburg. Among the songs written by Young is “Seven Bridges Road”, record by the Eagles.

Wednesday, June 8, 2005 James Sullivan, a representative of Lester Brothers Coal Company, says the company has no plans for blasting at its operations inside the Fleming-Neon city limits . “We don’t want to do anything that will impact the community negatively,” he said.

. Jessica Ranee Bentley, a graduate of Jenkins High School and a student at Cumberland College, will participate in the International Scholar Laureate Program Delegation of Medicine in Australia. She is among 80 university students chosen from the United States who have a strong interest in a career in medicine.

. Descendents and relatives of Hendricks D. “H.D.” and Anna Dixon Caudill held a reunion at Carcassonne Community Center. Sixty-one people attended with ages ranging from one year to almost 92.