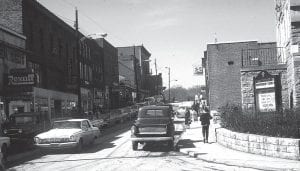 This photo of Whitesburg taken in January 1966, looking west from the bridge over the North Fork of the Kentucky River, shows Main Street back to normal after Christmas decorations were taken down. (Photo by John Engle)

Thursday, December 10, 1925 Letcher County Sheriff-elect Morgan T. Reynolds has executed the bond required before he takes office. Reynolds also announced publicly that no deputy will be hired by him if the deputy is “absolutely not a teetotaler and wholeheartedly in favor of law enforcement, especially the prohibition laws.”

. Several members of the Babe Ison family of Seco were poisoned the other day, apparently from eating canned goods or bad milk. It is being reported that all will recover, although a grown married daughter remains seriously ill in the Seco hospital.

. The Kentucky Court of Appeals has decided against Letcher County citizens who brought suit for a reduction of their taxes for 1924.

. Rescue workers have reached the main tunnel of the Fairview Mine in Nederland, Colorado, where 20 miners were entombed after a fire. The plight of the imprisoned men remained unknown at press time. One miner who was freed by rescuers, told how he and the other 20 smelled smoke from a fire and cave-in at the mine’s portal and rushed back, dynamiting the mouth of another tunnel to shut off the smoke. The survivor believes all the other miners will be found still alive.

. The Letcher County Schools Athletic Association adopted new bylaws during a meeting held December 5. The new rules state that no high school contestant 21 years of age or older shall be eligible. Also, no grade school student who is over 18 years of age shall participate in any games.

. Neon merchants Curry and Hush are putting on a big Christmas sale, beginning December 12 and ending January 1. The Wise brothers of Neon have also started their huge Christmas sale.

. Writes Mountain Eagle founding editor and publisher Nehemiah M. Webb: “Last week we had a rabbit for dinner and this week we had real deer meat. Next we are expecting a big bear.”

. The practice of “riveting” in the building industry is expected to soon give way to the process of “welding.” It is claimed that welding joints in steel structures costs less than riveting, is stronger, and is much more quiet.

Thursday, December 13, 1945 Members of a committee of Letcher County men have just returned from a trip to Frankfort, where they went to ask lawmakers for better roads here. The members say they were successful in securing a promise from the state to blacktop the road from the mouth of Garner down through Blackey and on to Cornettsville in Perry County. A contract for the work is to be let in April.

. A temporary sugar shortage is expected after new ration stamps are validated in January, the government has warned.

. Police are looking for the husband of a woman shot to death December 7 while sitting in a beer parlor in the Floyd County community of Garrett. Gertrude Triplett was killed after she was shot in the face and chest with bullets fired from outside the beer parlor. She was the wife of Shelby Tackett of Lackey. The couple were in the process of divorcing.

. A Perry County mother of four has admitted to the shooting and killing a young woman she found sharing a room with her husband. Mrs. Kelly Phillips said she shot Miss Mollie Fields and attempted to shoot her husband, who escaped by climbing though a window. Mrs. Phillips then surrendered to Hazard Police Chief Chester Jennings.

. Stores in downtown Whitesburg will remain open until 8 p.m. during the Christmas season.

. The Southern Bell Telephone and Telegraph Company is warning Letcher County residents that switchboards will be at their busiest in history with long distance calling over the Christmas holiday. “So please do not make any but necessary calls on December 24 and 25,” the company asks.

. Use of the newest invention in leather products — synthetic rubber crepe soles — is exploding across the shoe industry.

Thursday, December 8, 1955 Funeral services were held December 7 in Graveyard Hollow, Whitesburg, for Bert Fields, who was shot to death by his wife Saturday night at Quicksand in Breathitt County. Fields, a 31-year-old miner, and Fallen McIntosh, operator of grocery and used parts business and a former state police officer, were killed during an alleged “foray” at the Fields home at Quicksand about 8 p.m. on Saturday. The wife, Pearl Fields, was placed in the Breathitt County Jail after the shooting. Fields was shot twice through the heart and McIntosh once through the heart. The Fieldses, former residents of Whitesburg, had no children. McIntosh is survived by his wife and three children.

. Workers are erecting a new bridge leading across the North Fork of the Kentucky River at Thornton. The old bridge has long been a hazard to the traveling public.

. Joseph J. Doney Jr. is moving from Washington, D.C., to Whitesburg to serve as administrator of the United Mine Workers’ hospital that is now under construction.

. Governor-elect A.B. “Happy” Chandler will be sworn in in Frankfort on December 13. Lt. Governor-elect Harry Lee Waterfield will also take the oath of office during the same ceremony. Both men will be sworn on what may be one of Christendom’s most treasured documents, the Yonan Codex New Testament, which will start a nationwide tour in Kentucky after the inauguration. The volume, oldest known New Testament in Aramaic, the language spoken by Christ, is believed to date back to the

Fifth Century, and possibly the Fourth.

. Mrs. John A. Craft has received state authorization to operate a second taxicab in the Whitesburg area.

. Coach Preston Armstrong’s Fleming-Neon Pirates already have two wins under their belts, a 66-65 seasonopening win over Lynch and a 70-66 victory over Leatherwood.

Thursday, December 9, 1965 Projects for Letcher County which are typical and urgent in eastern Kentucky were presented Friday to a panel of a dozen high officials in as many agencies of the federal government in a conference at Jenny Wiley Park at Prestonsburg sponsored and arranged by Seventh District U.S. Representative Carl D. Perkins.

. The Kentucky Education Association voted this week to push for state taxes on minerals at the 1966 session of the Kentucky General Assembly. But Gov. Edward T. Breathitt said this week he will not ask for any new taxes during the legislative session.

. Donald Cook, president of the American Electric Power Company, is chairman of a campaign to raise $3.565 million for the 10 Appalachian Regional Hospitals, including the one at Whitesburg. “What happens in Appalachia concerns every American, and that is why we are planning a nationwide appeal,” said Cook.

. A walk-in blood bank at the Whitesburg hospital is being credited with saving the life of eight-year-old Billy Paul Collins Jr. of Haymond, who suffers from hemophilia, an inherited disorder that prevents his blood from clotting properly.

. Funeral services will be held Friday for three-yearold Randell Todd Webb of Haymond. The child died at the Jenkins Clinic Wednesday afternoon of injuries he received when he was hit by a car earlier in the day near his home.

. An investigation is underway into the crash of a private plane that took six lives in Knott County. Inspectors from the Civil Aeronautics Board and the Federal Aviation Agency arrived to start their probe of the crash, which occurred in a hollow along Puncheon Creek in Knott County, just a few miles from the Letcher County community of Deane.

. A subscription to The Mountain Eagle costs $3 a year for Letcher County residents.

Thursday, December 11, 1975 For the third and fourth times this school year, bomb threats forced cancellation of classes at Jenkins High School Monday and Tuesday. City and county police officers combed the building and found no bomb, but a basketball game scheduled for Tuesday night was canceled.

. Whitesburg City Council this week voted to spend 15,000 in federal Housing and Urban Development Funds to purchase lots on Tunnel Hill “for future sites for low and moderate income housing.” They did not identify the sites they have in mind to purchase, but community development planner Ralph Coldiron informed the officials they could develop the sites and re-sell them.

Porterhouse and T-bone steaks are on sale this week at the Whitesburg A&P for $1.28 a pound.

Wednesday, December 18, 1985 Letcher County Judge/Executive Ruben Watts blames Estill Blair and Lake Coal Co. for the poor condition of the road at Beetree Fork. Blair, the former county judge, blames Watts. Already in poor shape, the road, located near Premium off KY 169, became so rutted and washed out last week that school bus travel along the route had to be suspended.

. Between 300 and 400 Letcher County families will receive Christmas baskets next week through the combined efforts of civic and religious organizations and the local office of the state Human Resources Cabinet.

. Reports circulated here this week that Paul Mason, a Whitesburg businessman, is ready to announce he again will challenge Rep. Hoover Dawahare for the 91st District seat. Mason, who was narrowly defeated by Dawahare in the 1984 Democratic primary, would neither confirm or deny the reports, but did say he was thinking about running

. After conducting research a newspaper in Nashville found that Santa was a poor insurance risk with all of his rooftop landings and his weight issue.

Wednesday, December 13, 1995 Letcher County schools are working to improve attendance rates, but they have a long way to go to reach their system-wide target of 97 percent for elementary schools and 95 percent for high schools.

. The state Transportation Cabinet has already paid 1 million for the Energy Express convenience store near Jenkins, but the store’s owner has filed a motion in Letcher Circuit Court indicating that he will ask a jury to award even more money for the property. The owner, Letcher Circuit Judge Sam Wright, contends that his store and the small lot on which it sits is worth more than the $1.75 million appraisal arrived at in August by three court-appointed commissioners.

. Paul Patton was sworn in as the 56th person to serve as Kentucky’s governor moments after midnight Tuesday, repeating some parts of the century-old oath and toasting his success with champagne.

. For six years now, Mary Martin Hendrian, a native of Letcher County, and her husband Jim have traveled from their hometown in Michigan to Letcher County bringing Christmas presents to at least three dozen families. Mary Hendrian, who was born and raised in poverty, said that people in the community helped her family when her father died when she was three years old. Now she helps families in need.

. Registered nurses in Kentucky and West Virginia have resolved a dispute with the Appalachian Regional Healthcare hospital chain, averting a strike that was tentatively scheduled to begin this week.