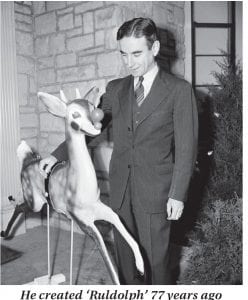 Robert May, a Chicago advertising writer, places his hand on his creation, “Rudolph the Red Nosed Reindeer,” in front of his home in Skokie, Illinois in December 1949. May dreamed up “Rudolph” in 1939 at the request of his boss, Chicago-based Montgomery Ward. The firm used the character as part of its annual Christmas coloring book. As the story goes, Rudolph is being treated poorly by his fellow reindeer because of his bright red nose — that is, until Santa Claus asks him to lead his sleigh from the North Pole. Rudolph — who was almost called “Rollo” and “Reginald” by May — then becomes Santa’s eighth reindeer and is treated with respect by all the others. (AP Photo/Ed Maloney)

Thursday, December 22, 1910 Stonemasons and other contractors building the L&E Railroad in Letcher County are asking for The Mountain Eagle’s help in asking citizens to stop handling their machinery and tools. “Our people should not do this as they run the risk of being injured as well as laying themselves liable to the law,” The Eagle says.

. The Mountain View Hotel of Whitesburg is now under new management and is up to date in all respects. The new manager is Stephen Combs.

. Location, location. The home and adjoining property of H.C. Boggs is for sale at Eolia. It is located within 50 yards of the post office and the same distance from two stores. The home is a good eight-room, two-story building with a good storehouse.

. The Riverside Hotel on lower Main Street in Whitesburg will be open to the public on or about January 1.

Thursday, December 24, 1925 Fifteen years ago, the community of Mayking was comprised of 10 homes, one store, a one-room schoolhouse, and sign on the edge of the road in front of Uncle Wiley Webb’s home that read, “Five miles to Whitesburg; 10 miles to Pound Gap.” Finally the railroad came through the middle of Uncle Wiley’s bottom, a new station was established, and now Mayking has more than 100 homes, six stores, and a three-room school building. Also, work is resuming soon at the Mayking Coal Company mines after a shutdown of about a year.

. A coal tipple operated by 300 non-union workers was badly damaged by fire. Authorities say the tipple, located near Steubenville, Ohio, on the West Virginia side of the Ohio River, is involved in the Northern West Virginia strike dispute. Fire started in four places simultaneously, resulting in damages totally at least $85,000.

. Noticing a “phony” light fixture in the Hughes building in the City of Harlan, officers investigated and found that by turning on the “light” liquor flowed from a tank concealed underneath the floor of the building’s garret.

. The gigantic Dix River Dam and hydroelectric power plant near Harrodsburg, Kentucky, has been completed after two years of construction work and is now in full operation. Dix Dam, which is owned by Kentucky Utilities and creates Herrington Lake, is the largest rock-filled dam in the world, the highest dam east of the Rocky Mountains, and 105 feet higher than Niagara Falls. It is 920 feet long, 700 feet thick at the base, and 270 feet high.

. A truckload of huge iron pipes arrived in Whitesburg Wednesday for use in the new city water system now under construction. “Coming at this time, these pipes mean much more than the ordinary Christmas present,” Mountain Eagle editor W.P. Nolan writes in a front-page summary. “It means that these pipes will help to make a better, more sanitary water system here for dozens of years to come.”

. Dr. R.H. McFadden announces the opening of his office for private medical practice in the Daniel Boone Hotel, Whitesburg.

Thursday, December 22, 1955 Cossie Quillen, proprietor of Quillen Drug of Whitesburg, has made his annual Christmas pledge to Letcher County residents who suffer blindness. Quillen, himself blinded in a hunting accident, has been giving a gift each year to every blind person in the county. This year he gave gifts to 56 people.

. Hurschell G. Walls, formerly of Whitesburg, will appear with the Male Choir of Grove Avenue Baptist Church, Richmond, Virginia, on Richmond’s WTVR television on Sunday morning. Mr. Walls and his daughter, Suzanne, will take part in the candlelight service at the church.

. The Electric Machine Supply Company has moved into its new and very modern home at Pine Mountain Junction in Whitesburg.

. The Whitesburg VFW Club is giving away a 1955 Buick 48 automobile, valued at $2,400. The car will be “raffled off ” on Christmas Eve after the VFW club member finish their annual practice of giving away Christmas treats to local children. Meanwhile, Star Service Station of

Whitesburg on Friday will give away a new bicycle — an Evans Boys’ Special — to someone who holds a lucky number given away by the station. Also, Roy Kenneth Hart of Sandlick is the proud owner of the first basketball to be given away during The Mountain Eagle’s current subscription drive.

. A 35-year-old Ohio man with strong family ties to Letcher County was together with his hunting dog when both were burned to death in a house fire last Friday night. Minter Caudill was closely related to large Caudill families in Letcher and Perry counties. His wife and four children were visiting relatives in Viper in Perry County when the fire broke out.

. One of the last merchants of Blackey, William Collins, is being treated for illness in a Lexington hospital.

. Mr. and Mrs. Joe Begley, son J.T. and daughter Janie of Boldman, Kentucky, were in Blackey over the weekend visiting friends and relatives.

. R. Martin, owner of Martin’s Department Store in Vicco, has suffered a second heart attack and is being treated at Baptist Hospital in Lexington.

Thursday, December 23, 1965 The new Letcher County Courthouse is all decked out for Christmas with a large tree banked with pine and holly boughs set in the pool where the memorial fountain flows in warmer weather.

. Four hundred Letcher County needy families received food baskets valued at more than $4,000 this week. The baskets were provided by the local service unit of the Salvation Army from funds left over from last year’s outpouring of donations from across the nation after a CBS telecast of “Christmas in Appalachia.” Recipients were chosen on the basis of need by chairmen from their home areas.

. Hazard Mayor Willie Dawahare was elected to another term as chairman of the Upper Kentucky River Area Development Council at the council’s December meeting in Hazard.

. Dr. Vincent Arroz Jr., a native of the Philippines, has been employed by Whitesburg Appalachian Regional Hospital. Dr. Arroz will be here for the next six months.

Thursday, December 25, 1975 Mountain Comprehensive Health Corporation will open a health clinic in Whitesburg next month. Lois A. Baker, executive director of MCHC, said the agency has rented the third floor of the Daniel Boone Hotel in Whitesburg for office space for the new clinic.

. A house on Adams Cliff belonging to Martha Dent was totally destroyed be fire. The house was rented by the Willie Dixon Jr. family. Philmore Bowen, Whitesburg fire chief, said the blaze started about 3 p.m. apparently from a stovepipe in the house.

. ”Now while this is unpleasant for those of you who must get out and get to work, cold winter nights make for a good crop year. Maybe it freezes out the bean bugs, some weak seeds, especially when the garden was plowed in the late fall months,” writes Millstone correspondent Mabel Kiser.

. To get to the finals of the Jenkins Invitational Basketball Tournament, the Lady Cavaliers beat Letcher 78 to 39.

Wednesday, January 1, 1986 A circuit ruling apparently has ended an effort to prevent

the Letcher County Board of Education from building the new Whitesburg High School on the old school’s present site. Special Judge Calvin Manis last week dismissed most of the claims of a lawsuit filed by the Parents Action Group for Education (P.A.G.E.) P.A.G.E. was seeking to halt the board’s plan to renovate and add onto the high school on its present site at School Hill and to build a new Whitesburg Middle School adjoined to West Whitesburg Elementary School.

. The Letcher Fiscal Court will revoke the franchise of garbage pick-up services which do not pay up their overdue fees to the county. The court voted at its December meeting last week to notify the garbage services that they must pay their franchise fees within 30 days.

. Families with children are sharing a smaller portion of the nation’s economic pie despite a recent trend of mothers going back to work, according to a new study commissioned by Congress.

Wednesday, January 3, 1996 More than a third of 1,682 persons arrested for committing crimes in Letcher County in 1994 were charged with offenses involving the use of alcohol, a Kentucky State Police report says.

. Tougher hiring standards for the Letcher County School District have come under fire from some teachers and school board members. The critics complained at the school board’s December 28 meeting that the new standards are so high that they might ruin the chances some Letcher County students have of teaching in the school system. The new, stricter standards would automatically disqualify applicants with a college grade point average less than 2.9 (a “B” average is 3.0) from being interviewed for teaching jobs. The statewide minimum grade point average for teachers is 2.5.

. The Letcher County Board of Education has decided not to place a time limit on persons who wish to speak at its meetings, at least not on everybody and not all of the time. The proposed time limit was of the minds of many who attended the board meeting at the newly remodeled Cowan School. Whitesburg Attorney Edison Banks called the proposal “an attack upon our basic liberty of freedom of speech.”

Wednesday, December 28, 2005 Water department manager Carlos Phillips told the Fleming-Neon City Council that sharing two wells has caused a problem with “hard” water. He said the problem will be resolved when the system can return to just using one well. He told the council the city’s new emergency well has been drilled and electrical service will be established soon and the well should be pumping by the beginning of the year. Water crews have been forced to switch back and forth between two wells to keep either from running low.

. The Letcher County Board of Education approved the preliminary drawings of the West Whitesburg Elementary School renovation project presented by Whitesburg architect Bill Richardson at its regular board meeting.

. The exit road leading from U.S. 119 to Lakeside in Jenkins was hazardous after a couple of inches of snow fell in the higher elevations of Letcher County. High temperatures are expected to reach into the 50s for much of this week.

. The Letcher County Central Lady Cougars sandwiched victories over Louisville Moore and Boyd County around a loss to Louisville Fairdale to finish third in the eight-team Arby’s/KFC Classic at McCreary Central.