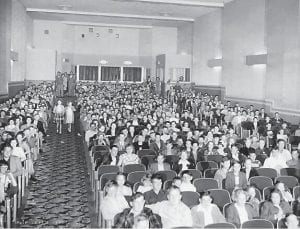 The Isaac family, owners of the Alene Theatre, commissioned Wainscott Studios of Cumberland to take photos of the new theatre at its opening in 1950. Construction of the theatre began 67 springs ago.

Editor’s Note: With spring weather arriving in March 1949, construction of what would become to be known as Issac’s Alene Theatre was fully underway in downtown Whitesburg. This story concerning the planned construction of the Main Street theatre appeared in the February 10, 1949 edition of The Mountain Eagle. The theatre opened in 1950 and was closed in the mid- 1980s. Riverside Apartments and Whitesburg Florist now occupy the building. 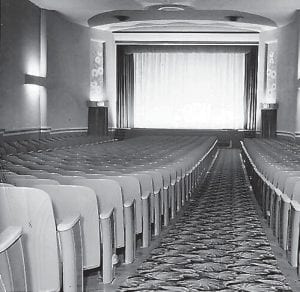 This photo taken inside the then-new Isaac’s Alene Theatre by Wainscott Studios of Cumberland show why the movie house was considered one of the finest in all of eastern Kentucky when it opened in 1950. Sadly, the theatre closed in the mid-1980s. 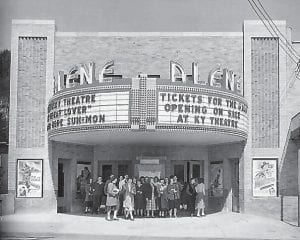 Patrons stand outside Isaac’s Alene Theatre in Whitesburg during its grand opening in 1950. The theatre wasn’t yet named when construction began 67 years ago, in Spring 1949. The theatre building is now home to Riverside Apartments and Whitesburg Florist.

The new theatre being built in Whitesburg by the Cumberland Amusement Company will be located on one of the town’s old landmarks, a salt well which was used as a point of reference by many early deeds and property transfers.

The well has been filled and covered by the Joe Romeo Construction Company, builders of the new structure.

The building will be fireproof and air-conditioned and will be one of the most modern theatres in eastern Kentucky, according to J.E. Isaac, president of the Cumberland Amusement Company. The cost of construction will be between $100,000 and $125,000. Mr. Isaac hopes to have the theatre in operation by fall.

A contest will be conducted later in the year for selection of a name for the theatre. The public will be invited to submit names, and a prize will be awarded for the winning name, Mr. Isaac says.

Seating capacity will be between 700 and 800. There will be no balcony in the theatre. The building will be all steel, brick and concrete; no wood is being used. The construction company in charge of the building states that obtaining steel is the biggest problem, but the theatre should be open by September or October.

The Cumberland Amusement Company owns a theatre in Cumberland, one in Benham, and, counting the new one, two in Whitesburg; the other being the Kentucky.