Police get break in ‘Crime of the Century’ 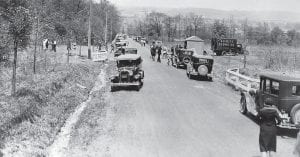 Eighty-four years ago this week — on May 12, 1932 — the body of 20-month-old Charles Augustus Lindbergh Jr., the eldest son of famous aviator Charles Lindbergh, was discovered in a New Jersey field. In what was then known as the “Crime of the Century,” the baby was kidnapped from his crib on March 31, 1932. Lindbergh paid a ransom of $50,000, but baby Charles wasn’t returned to his parents. The kidnappers had murdered him by fracturing his skull.

The top photo shows sightseers visiting the location where the body was found, about 4.5 miles from Lindbergh’s Highland, N.J., home. The photo at bottom shows William Allen (left) and Orville Wilson facing newsreel cameras and sound equipment the day after the two men found the badly decomposed body at the edge of the woods. A 34-year-old German immigrant, Bruno Richard Hauptmann, of Bronx, New York was charged with the crime, sentenced to death, and electrocuted on April 3, 1936. Famed journalist H.L. Mencken described the crime and the sensational coverage surrounding it was “the biggest story since the resurrection.” 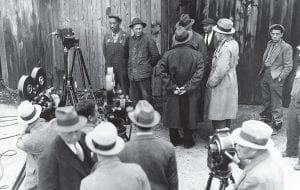 Lindbergh Sr. first gained fame in 1927 when the then- 25-year-old U.S. Air Mail pilot completed a solo Transatlantic flight from New York City to Paris, France in 33-1/2 hours in a single-seat, single-engine plane called the Spirit of St. Louis. The U.S. Army Corps of Engineers was awarded the Medal of Honor, the nation’s highest military decoration, after the flight.