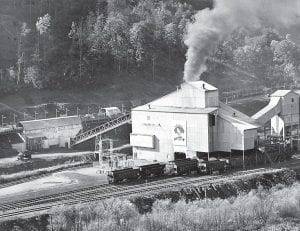 Still going (sort of) after all these years These three photographs were taken in the 1950s and show Consolidation Coal Company’s Hendrix Mining Complex at Deane. The sign on the tipple in the top photo shows Consol’s “Cavalier” logo. After several ownership changes, a large tipple still remains on the Deane site. The complex is now owned by New Yorkbased Quest Energy, which bought the company from Lexington based Rhino Resources late last year. These photos were provided by the late Dave Zegeer and appear courtesy coaleducation.org.

Thursday, May 20, 1926 A mistrial has been declared in the “possessing whiskey” case against Letcher County Jailer Fess Whitaker. “Mr. Whitaker made the fight of his life to beat the case,” The Mountain Eagle reports. “He did not deny possessing the whiskey, but pled that at the time he was in such a condition of mind from the use of a certain drug that he was not accountable for his acts. He had already been tried for being drunk on the occasion and found not guilty. After an hour or two the jury in the last case failed to agree and was discharged. The case will likely not be retried at this term.”

. “You ought to see Fess Whitaker’s cabbage patch — 2,000 plants almost ready to head,” Mountain Eagle editor and publisher Nehemiah M. Webb writes. “At least the prisoners will have plenty of cabbage.” 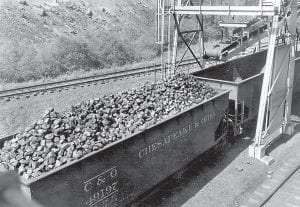 . Former New York Giants and Chicago Cubs pitcher Shufflin’ Phil” Douglas was “all that could be wished for, all that dared be hoped for” as he struck out 10 batters to lead the Seco baseball team to a 9-1 win over Midland before an opening day crowd of about 1,000.

. Heavy rains Saturday and Saturday night flooded the North Fork of the Kentucky River and its tributaries in Letcher County.

. The Blackey Ice Company is now sending its delivery wagon to Whitesburg on Mondays, Wednesdays and Fridays.

. The Letcher County Grand Jury returned 210 indictments this week, 110 of them for liquor law violations. The county has become “a haven of peace,” writes Eagle editor Nehemiah M. Webb.

. The Kentucky State Highway Commission this week promised to widen the highway from Sandlick/Marlowe to Ermine, adding that a construction contract for the project will be let soon. 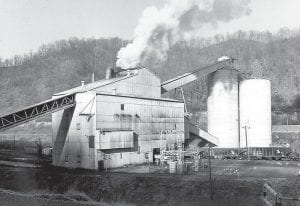 . The Letcher County Board of Education is accepting sealed bids for the erection of schoolhouses at Beefhide, Little Colley, and Mill Branch.

Thursday, May 23. 1946 Nearly three years after an election in which Letcher County voters narrowly outlawed the sale of beer and whiskey, the wet-dry question is on the ballot again for a special election to be held June 15: “I am praying with all my heart that God will stop every vote that is intended to bring whiskey back to our county,” Mrs. Rebecca Jones of Fleming writes in a “letters to the editor” campaign organized by the “dry” forces.

. In an advertisement urging Letcher County residents to vote against legalizing alcohol sales for the first time in three years, the Rev. J.S. Robinson of the “Committee for Local Option” says those behind the wet-dry petition are the “distillers and brewers of Louisville, Milwaukee, St. Louis and Chicago.” Letcher County Judge Arthur Dixon set the June 15 special election after citizen Ed Maggard and 3,300 other county voters signed a petition asking for the vote. According to Dixon, the ballot question will read this way: Are you in favor of continuing Prohibition in effect in Letcher County, Kentucky, and each precinct thereof.”

. Fearing that a move is underway to put a local option election on the ballot in November, An estimated crowd of 7,000 coal miners, including a large number from Letcher County, attended a miners’ rally held in Wayland in Floyd County on May 12. UMW Local 5775 of Kona was represented by 49 miners.

. June 4 is the last day for registration to vote in the August 3 primary election.

Thursday, May 17, 1956 The average Letcher County resident earns $805 a year, a new study on personal income in Kentucky shows. The study by University of Kentucky economists shows that Jefferson County (Louisville) has the highest per capita income at $2,039. The yearly income for residents in 22 Kentucky counties average less than $600, including Breathitt ($592), Knott ($364), and Martin ($330).

. A capacity crowd gathered at Whitesburg’s Elinda Ann Drive-In for a rally held in honor of U.S. Senator Earle C. Clements, a Democrat who is seeking re-election. The large crowd saw Clements but didn’t hear him speak, as he had to leave early for Washington to attend to urgent business. The crowd seemed just as pleased to hear from the Honorable Bert T. Combs of Prestonsburg, former Court of Appeals judge whom Clements is supporting in his bid to become governor of Kentucky. Dr. B.F. Wright of Seco, hosted the event and warned the crowd to beware of “the gold mine in the sky crowd” of current Democrat Governor A.B. “Happy” Chander.

. The Letcher County Board of Education will take over the operation of the Stuart Robinson School at Letcher effective July 1. The Presbyterian Church’s decision to relinquish control of Stuart Robinson to the local school board was announced at the school board’s May meeting.

Whitesburg and Neon no longer feel far apart after the end of charges on telephone calls between the two towns. In order to reach Neon from Whitesburg, telephone users must dial 5 and the desired number. If you’re in Neon and you want to reach Whitesburg, dial

6 and the desired number. “This is indeed another milestone accomplished for Letcher County,” The Mountain Eagle says of Southern Bell Telephone and Telegraph Company’s decision to remove the tolls.

. Now in Kyva Motor Company’s showroom in Whitesburg is the Pontiac Catalina, which features the “Strato- Streak V-8” engine and the “Strato-Flight HydraMatic” transmission.

. The Letcher County Board of Education has dismissed charges against a Fleming-Neon Elementary School employee who had been accused of possessing and consuming alcoholic beverages on school premises. Board Chairman, Dr. B.F. Wright, a physician, said the whiskey in question had been used for medicinal reasons, in very small quantities, and that the employee was innocent of any deliberate wrongdoing. After a heated discussion between Wright and Board Member Arnold Hall, who wanted the employee reprimanded, the majority of the board supported Dr. Wright’s position.

. The May 10-11 frosts got most of the garden produce in the Blackey area. Potato plants were as droopy as a plant can get — and so are the gardeners, who now face the prospect of a lot of replanting, writes columnist Larry Caudill. But the old folks put up an argument, Caudill says. They insist these cool May nights will bring hot times in July.

. Patricia Ann Wolfe of Jenkins is leaving for Ecuador soon as a member of the Peace Corps. A Jenkins High School graduate and a daughter of Mr. and Mrs. C.B. Wolfe, she spent most of her college career preparing for her two-year service for the Peace Corps. Miss Wolfe graduated from the University of Kentucky on May 9.

. Craig Scott of Cumberland has replaced Nolan Webb as announcer at WTCW-AM at Mayking.

Thursday, May 27, 1976 The Letcher County Fiscal Court took the first step toward developing the county’s own sanitary landfill dump at its May meeting. The court decided not to pay the Kentucky River Garbage District (KRGD) for the use of its landfill at Millstone and discussed plans for setting up a system within the county to bury the trash.

. Federal and state mining officials announced this week that there is still possibility of future explosions in the sealed Scotia mine where 26 men died in two explosions in March, and that no time had been set for reopening the mine.

Wednesday, May 28, 1986 A public defender has been appointed to replace a Somerset attorney who was fired by one of the three men charged with murdering 23-year-old Tammy Dee Acker. Judge F. Byrd Hogg has appointed Pat McNally of Hazard as the new lead attorney for defendant Donald Terry Bartley of Evarts, court records show.

. Elderly people in Letcher County and other Central Appalachian counties are fewer than the national average, but their personal circumstances are “alarmingly worse.” They are poorer and more likely to be disabled. They fall well below the national average in terms of income, access to transportation, availability of telephones, and the presence of resources such as long-term care facilities. Poverty levels are extremely high, with about 25 percent living below the national poverty level, compared with 15 percent nationwide.

Wednesday, May 29, 1996 School buses ran safely through the lower end of Letcher County Monday morning, despite the flooding last Tuesday that had dangerously undercut some roads up to six feet. The safety of the roads were ensured by the quick work of County Judge/Executive Carroll Smith and some dedicated workers from the U.S. Department of Agriculture’s National Resources Conservation Service.

. The Letcher Fiscal Court on Monday night passed a resolution authorizing County Attorney Harold Bolling to work with a group of citizens to take action necessary “to lay the framework and groundwork” for a countywide water and sewer district.

. The Letcher Fiscal Court is getting tough with motel and hotel owners who are not paying the county’s new three-percent tourism tax.

. Members of the Whitesburg Veterans of Foreign Wars and Whitesburg American Legion will hold Memorial Day services for U.S. veterans in cemeteries throughout Letcher County on May 30.

. Whitesburg native Bryan Howard, a standout on Transylvania University’s nationally ranked men’s basketball team, has been named Pioneer Athlete of the Year. A team captain, he was part of a group of seven seniors who led Transylvania to a 27-5 record this year. He is the son of Keith and Greta Howard of Whitesburg.