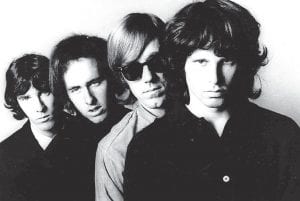 The Doors fire up radio in 1967 On July 7, 1967, a now-classic song by The Doors, “Light My Fire,” hit Number One on the Billboard Top 40 charts. The song appears on the band’s 1967 debut album, The Doors. Members of the band are, from left, John Densmore, Robbie Krieger, Ray Manzarek and Jim Morrison. (AP Photo)

Thursday, July 8, 1926 “Let it be remarked as a fact right here that in a section like ours where thousands are of the same blood, mixed and mingled by relationship, affected by local prejudices, often easily kindled into animosities, a situation exists that is not easy to handle,” Mountain Eagle editor Nehemiah M. Webb writes of the new Letcher County administration’s first six months in office. Webb acknowledging that some citizens believe the new leaders “are just too hard on offenders of the law,” he says the new county officials “have come down to us through the generations from the day when civilization broke into these hills. Their love for Letcher County and its citizenship is as strong as these hills. They are launched, tied steadfast to the enforcement of the law.” 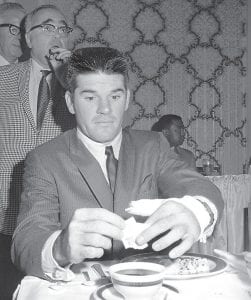 Pete Rose is All-Star, but can’t play game because of injury Pete Rose, Cincinnati Reds right fielder, has a little trouble opening a packet of sugar at a luncheon in Houston, Texas on July 8, 1968. Rose, picked as a starter in the 1968 All-Star game, was sidelined after breaking his thumb recently, but is in Houston to attend the game. (AP Photo)

. While scouting over at “Fieldcliff ” in Whitesburg, Wallace Fields was badly hurt when a rock fell on him.

. Prohibition Officer Clark Day and the Letcher County Sheriff ’s Department charged 19 persons Saturday from Whitesburg to Ulvah for drunkenness and other whiskey law infractions. Twelve of those charged were brought to jail in Whitesburg, while the others gave bond for appearance in court on Monday. Twenty-nine persons in total were arrested between Thursday and Sunday in Letcher County, says The Eagle, “as the spirit of the Fourth of July seems to have gotten to a lot of patriots.”

. The Indian Bottom Church at Blackey celebrated its 116th birthday with the baptism of nine persons, including Uncle Tom Dixon, 75, son of the old patriarch and pioneer Regular Baptist minister, Elder James Dixon. The crowd was estimated at 1,000.

Thursday, July 11, 1946 A large crowd packed into downtown Whitesburg for a Fourth of July celebration that included an 8 p.m. fireworks show from the top of the hill above the Whitesburg school, which let people from all sections of town view them. After about 45 minutes of fireworks, “all the gay crowd gathered in front of the Daniel Boone Hotel and the Courthouse and watched many sets of square dance accompanied by oldfashioned fiddling,” The Eagle reports. The American Legion Douglas Day Post and Whitesburg Athletic Association sponsored the event, which saw a new Jeep given away to Mrs. Jimbo Collins in a random drawing.

. Nikolai V. Novikov, new Russian ambassador to this country, promised this week that the Soviet Union “will never start a war against the United States or anyone else.”

. Ernest Martin, 43, of Millstone, was killed on the job at South East Coal Company Monday morning. Mr. Martin, who is survived by seven children and three stepchildren, was a valuable employee at South East. He was killed when the motor he was operating jumped the track, causing the cars of coal behind him to pile upon him. He was buried today in Thornton Cemetery.

. Mr. D.S. Setzer announces the opening of his new accounting service in the bank building in Whitesburg.

. Charles Irving Lafollette of Adrian, Michigan died on July 8 of injuries he received on July 5 when he was riding his motorcycle up Pine Mountain above Lakeside near Jenkins and collided head-on with a car coming down the mountain. The World War II veteran was among a group of 15 men riding through Letcher County on a motorcycle tour. They had stopped to eat breakfast in Jenkins before heading on to Johnson City, Tennessee. The wreck occurred after Mr. Lafollette attempted to pass a car on a curve.

. One of the largest property auctions in the history of Letcher County is expected to take place July 18 when the entire estate of the late James H. Frazier of Whitesburg is put up for sale. The property consists of the filling station and brick house of Frazier’s located across from the courthouse; the A&P Store building opposite the courthouse; one store building and one house and lot at Caudill; one house and three lots on Railroad Street; three lots in the Collins-Harvie Addition; one 54 acre mineral tract on Stallard Farm, Craft’s Colly; one 50-acre mineral tracts on H. Combs property on Craft’s Colly, as well as many other lots in different parts of town.

. The Mountain Eagle is celebrating its 40th year of operation this week.

. Emery Lewis received his discharge after two years with the Navy and returned to his home in Whitesburg on Sunday.

Thursday, July 5, 1956 Fifty-three Letcher County girls and boys attended the annual 4-H Club camp at Quicksand in June. It was the largest group ever to attend camp from the county.

. Millstone native Newton Willard Collier is area supervisor for Kentucky Power Company. Collier taught school in Letcher County for five years before becoming a meter reader for the power company. He has also been a line foreman and meter serviceman.

. Kentucky Governor Albert B. “Happy” Chandler will appear on the “Meet the Press” radio and television program to be broadcast from New York City Sunday at 4:30 p.m.

. Private First Class Daniel J. Quillen Jr. was selected soldier of the week for the Western Area Command in Germany. Quillen, whose parents live in Neon, entered the Army in 1954 and completed basic training at Fort Knox. He attended Berea College. His wife, Doris, is with him in the Army.

. An estimated crowd of 1,000 attended the Letcher County Democratic Party Convention on Saturday in the Whitesburg Gym. Twenty-five delegates were named to attend the state Democratic Convention held in Louisville July 3.

. Tony Curtis and Ernest Borgnine star in “The Square Jungle,” a boxing film showing at the Alene Theatre this weekend.

. Letcher County will not increase taxes this year, despite a state law which permits a 10 percent increase in the county’s income from taxes.”

. ”Chestnuts should be plentiful on Millstone this year for there was no rain,” writes Millstone correspondent Mabel Kiser. “Old folks used to say there would be no chestnuts if it rained on the Fourth of July.”

Thursday, July 15, 1976 The Scotia Mine — sealed with the bodies of 11 men killed in a March 11 explosion still entombed — was scheduled to be opened this week.

. Whitesburg may start paying a higher tab for police services following withdrawal of state funds, which contributed an extra $88.20 to each policeman’s monthly pay packet.

. Control over the spending of the vast multi-million dollar coal severance tax fund is being shifted this month

from the county judges to a series of boards authorized by the General Assembly and appointed this week by Gov. Julian Carroll.

Wednesday, July 16, 1986 The City of Whitesburg is laying the groundwork for a newly proposed program that will make bond issues more affordable for small Kentucky cities. Mayor James D. Asher recently attended a meeting of the Kentucky Municipal League in which he applied for $600,000 for the city of Whitesburg. “This in no way obligates us to that amount,” Asher said

. The road leading from Thornton Hill to Sergent though Holbrooktown will be closed for several weeks during construction of a new bridge across the Kentucky River.

Wednesday, July 17, 1996 CSX Transportation, Inc., says it will “take back” railroad right of way donated to the City of Whitesburg nearly four years ago if the city doesn’t agree to put up cash for the property that is now being used for commercial purposes.

. The newest, and as of yet unusable, water treatment plant in Whitesburg will have to be almost completely torn down and rebuilt in order to meet specifications and operate effectively, according to representatives from CDM Engineering in Louisville, which was asked by the city council to evaluate the plant.

Wednesday, July 12, 2006 A site selection team from the U.S. Bureau of Prisons will visit Letcher County next month to see if there is land suitable on which to build a medium-security prison. A group of local officials and volunteers has identified three possible sites for a prison — two in the Payne Gap area and one near the community of Van.

. The Letcher County Fiscal Court voted 4-2 this week to delay making a decision on whether to give the Letcher County Board of Education $750,000 in coal severance tax money to help build a new vocational and technical school estimated to cost more than $5.7 million.

. Ralph Stanley and Pound, Va. native Reagan Boggs are among the performers who will perform on “Mountain Stage”, a public radio music program that will visit Bristol, Va., this summer. Two radio shows and at least four public television productions will take place at the Paramount Center in Bristol.

. Wanda Wright, of Jenkins, was presented with the District Good Citizen Award given by Masonic District 29. She was honored for “her outstanding contributions and achievements in making her community a better and brighter place to live.”