Thursday, September 9, 1926 The town of Haymond has been officially separated from the corporate limits of Fleming and will now be under the supervision of Letcher County.

. An estimated 7,000 people attended Consolidation Coal Company’s all-day picnic in Jenkins on September 4. The white baseball team from Charleston, West Virginia was awarded $260 for winning its division. The winner of the games for colored baseball teams, hometown not listed, was awarded a prize of $20.

. The Whitesburg graded and high schools are reporting the largest enrollment in the history of the schools — 350 grade school pupils and 132 high school pupils. In 1910, there were only five high school students at Whitesburg and 90 students the various other grades. “In high school this year we have enrolled students from Ice, Ermine, Whitco, Millstone, Kona, Sandlick, Craftsville, Jackhorn, Fleming, Cowan, Colly, Mayking, Cumberland, Elsiecoal and Hindman,” reports Professor H.H. Harris.

. “The school on the beautiful little hill is ours,” writes Mountain Eagle editor Nehemiah M. Webb. “What shall we make it?’

Hazard attorney Thomas E. Moore says he saw one of the wonders of the world while driving up and over Pine Mountain yesterday. “At the head of a deep ravine, almost a canyon, we looked down on a blood-red sun,” Moore told The Mountain Eagle. “If I remember correctly, it was the first time in my life to look absolutely down on a setting sun — the first time to have sun at my feet.”

. Grade work has started on the Garner Road of Rockhouse toward the Knott County line. 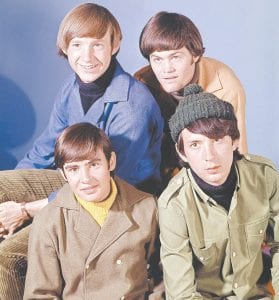 September 8, 1965: The beginning of The Monkees An ad that appeared in New York City’s “Variety” magazine on September 8, 1965, drew 437 responses from young male musicians who hoped to be chosen a member of what would become America’s first “boy band,” The Monkees. By 1966, the band and TV show, “The Monkees,” were on their way to becoming a cultural phenomenon that popularized such songs as “Daydream Believer,” “Pleasant Valley Sunday,” and “Last Train to Clarksville.” Seen in the 1966 photo above are (clockwise from top left) Peter Tork, Mickey Dolenz, Michael Nesmith, and Davy Jones. A band members except Jones, who died of a heart attack at age 66 in 2012, took part in the recording a critically-acclaimed new album that was released earlier this summer. The band is also touring. (AP Photo)

. Seco Coal Company official Henry Pfening is temporarily moving his family to Lexington “so as to give his children better opportunities for school.”

. A six-week miners’ strike against Elkhorn Coal Corporation has ended and miners are returning to work, the United Mine Workers union says. The strike was started over Hemphill miners’ demand that a deputy sheriff be removed from duty in that community.

. James Back, 54, of Blackey was fatally injured in a slate fall Saturday at the Collins and Adams Coal Company mine on Camp Branch. His wife and four children survive him. .

The new battleship Kentucky, which is now under construction, will be equipped to carry atomic missiles, the Navy says.

. Donald Day of Whitesburg, and Ralph Reed and Glenn Brown of Dry Fork, all young boys between the ages of 10 and 13, killed a four-foot long copperhead at Dry Fork. The snake, which was nine inches around, was found to be carrying 28 little ones.

. Jenkins High School basketball coach Cleston Saylor is in coaches’ training at the University of Kentucky.

. The young people of Upper Linefork have organized a recreation club. Dues are 50 cents per month or $5 per year.

. Former Letcher County Judge Sandy Adams died of a heart attack Sunday in Cleveland, Ohio, where he was managing the Weddell Hotel. Adams, 66, was the judge here from 1920 to 1924.

. Bert Barkdull is the new manager at the Doctor Pepper Bottling Company in Whitesburg. He comes to Letcher County from Nashville.

. Willard Adkins is the new manager at Star Service Station, located on Hazard Road in Whitesburg.

. The new Kentucky Fair and Exposition Center and Coliseum will open in Louisville September 7 with the opening of the Kentucky State Fair.

Thursday, September 8, 1966 Construction is underway on a new building to house Letcher Manufacturing Company at Isom. Mrs. Nathan (Lois) Baker, president of the firm, said a new $100,000 building is going on land purchased from N.L. Combs. The firm has a $601,000 contract to build furniture for the Federal Services Administration during the coming year.

. Chuck roast in on sale for 39 cents pound at the Foodtown located in Whitesburg.

. ”Folks in and around Millstone are killing many squirrels this season. I reckon they think if there is nothing for the squirrels to eat this winter they might as well kill them,” writes Eagle correspondent Mable Kiser.

. An Eagle editorial states “Whitesburg city officials find themselves this week facing both a crisis and a challenging opportunity as the result of the stop of construction on the new Whitesburg Area Vocational School by the state health department.” The editorial comes after sewage problems stopped the school’s construction.

. Groundbreaking ceremonies were held last week for construction of Lake Barkley State Park near Cadiz in western Kentucky. The $8-million facility will feature a 124-unit resort lodge and 15 vacation cottages.

Fields has sued the Letcher Fiscal Court for violating the state’s Sunshine Law requiring public agencies to give proper notice of meetings. Neither the county attorney’s office nor The Mountain Eagle was informed of a secret meeting held August 31. Fields asks that action taken at the meeting be “declared null and void.”

. A 3-1/2 year old Neon boy died Monday after the car in which he was left sitting alone caught fire and burned.

. The Whitesburg City Council has hired local architect Bill Richardson to design a $180,000 renovation project at the municipal swimming pool.

. The Whitesburg Yellowjackets received a scare at Jenkins Saturday night but hung on for a 21-20 win.

. The Fleming-Neon Pirates suffered their third straight loss over the weekend, losing to the undefeated Lynch Bulldogs in a close game, 14-12.

Wednesday, September 3, 1986 According to Letcher County Sheriff Ben B. Taylor and Fleming-Neon Police Chief Carlos Phillips, two men broke down the door of the Neon post of the American Legion last Tuesday night and robbed the club of about $2,000. The holdup is the third since early August when a lone man with a pistol walked into the Energy Express convenience store at Payne Gap, and forced the night clerk to empty the cash register. He left on foot with about $550. Just one day before the stickup at the American Legion post, a small man with a nylon stocking over his head and carrying a small pistol took an undetermined amount of money from the manager of the Family Dollar Store in Whitesburg.

. Chris and George Adams raised some pumpkins that weighed more than 100 pounds according to Eagle correspondent Kathy Wolfe.

the Kentucky River Area Development District’s board of directors at Buckhorn State Park. She said the future of the eastern Kentucky economy does not appear bright.

Wednesday, September 4, 1996 U.S. Rep. Harold “Hal” Rogers (RSomerset) told an audience of Letcher County Republicans last week that he traces the rise in teenage drug abuse to an action by the administration of Democratic President Bill Clinton in 1992. That year, he said, Clinton “wiped out” a drug office within the White House which had as its main effort stopping heroin and cocaine from coming into the United States.

. The cost of teenage auto accidents in Kentucky reached about $410 million in 1994, according to a newly released study.

. The Grascals, whose 2005 Grammynominated debut album featured a guest appearance by Dolly Parton, will perform at the Appalshop Theater on WMMT’s “Bluegrass Express Live” on September 14.

. A ballpark at Fleming-Neon was vandalized over Labor Day weekend, leaving a long list of items that will need to be fixed or replaced. A minimum of $3,500 worth of damage was done to the Fleming-Neon Goose Creek Fields, according to Kentucky State Police Trooper Adam Hall.