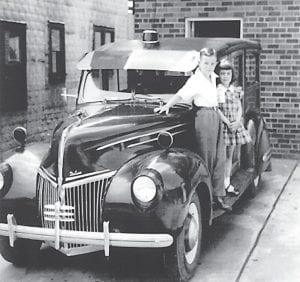 Looking back at the Whitesburg Fire Department Officers of the Whitesburg Fire Department who are no longer alive were honored over the weekend during the annual Mountain Heritage Festival. Among those cited were former Chief Remious Day Sr., who obtained this 1939 Ford Deluxe as the city’s first fire car shortly after the department moved into old City Hall, which now houses the offices of The Mountain Eagle. Standing on the running board of the car were two of Day’s children. Day died in September 1966 at age 44, after 20 years with the department.

Thursday, September 30, 1926 Under a front page headline, “Surrenders The Eagle,” founding editor and publisher Nehemiah M. Webb pens a goodbye letter to readers of The Mountain Eagle in which he says this is his last issue at the paper he founded 19 years ago. “I love the honor and glory in our people. I know them well and I trust the Eagle will continue to be such as to merit their heartiest approval. With these few words we bow from the scene of action, extend a hearty handshake to all, step off the boat and say goodbye, boys, goodbye!” Webb will go to work as an insurance agent with Commonwealth Life Insurance Company. Veteran Eagle employee Karl E. Davis will now be in charge of the newspaper and job printing operation. He will be assisted by Parnell Johnson of Whitesburg. 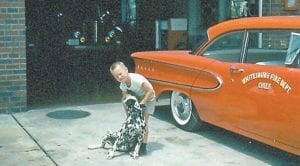 Chief Remious Day’s son, Raymond Lee Day, played with a Dalmation that served as the firehouse mascot when this photo was taken in the early Sixties.

. Andrew J. Adams, 21, of Millstone, was killed after he was struck by a freight train that had started backing up at the time Adams stepped onto the track.

. After receiving numerous complaints about drunken behavior across the county, particularly at Elsiecoal, Letcher County Sheriff Morgan T. Reynolds said he will crack down on those who sell and make homebrew, which the sheriff says is just as illegal as moonshine whiskey. “I do not intend to tolerate this condition, and I want to ask everyone to be sensible and let this stuff alone,” Reynolds says. “I call on the management of all coal companies to lend their influence in this direction, as the usefulness of your men to you depends on their being sober and ready at all times to work.”

. Its enrollment having increased from 108 students on opening day, August 30, to 131 children now, the Caudill’s Branch School at Carbon Glow has added a third teacher, H.D. Caudill. He joins David D. Caudill, who teaches third, fourth and fifth grades, and Mrs. David D. Caudill, who is the principal and teaches sixth, seventh and eighth grades. 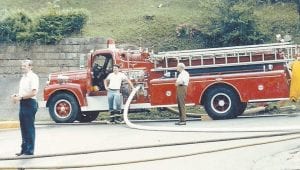 At left is the late Herb Smith, a former assistant fire chief who was among those honored. Standing at the pumper is Smith’s son Carroll, former Letcher judge/executive.

. Jack Demsey, the world’s champion prizefighter since 1919, was knocked out of the box by Gene Tunney at Philadelphia a few nights ago.

Thursday, October 3, 1946 A 300-gallon moonshine still was captured by Letcher County sheriff ’s deputies and a federal official near Jenkins. The still, located 300 yards above the old Bethel Baptist Church, was being tended to by three men when officials arrived. All three men were taken to Pikeville, where they are held awaiting action by the federal grand jury.

. Eight miners were killed in Kentucky during the month of August, bringing the number of miners killed in the state in 1946 to 65. 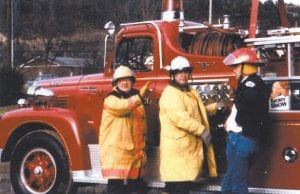 The late Shade Frazier, left, and the late Morris Mullins, center, were longtime volunteer firefighters who were honored. At right is present Coroner Perry Fowler.

. Only two of eight magisterial districts in Pike County remain wet after local option elections were held October 1. The two Pike County districts voting to stay wet were District 7 (Pond Creek) and District 8 (Peters Creek). Both are mining areas near the West Virginia border. Meanwhile, Floyd County also voted to go dry on October 1 by a vote of 6,274 for prohibition and 4,669 against.

. Gestapo founder Hermann Goering, the former second in command under Hitler, and 10 other Nazi war criminals have begun their last two weeks of life under suicide watch with virtually no hope of an Allied Council reprieve from the hangman’s rope. American soldiers will guard them until their executions. 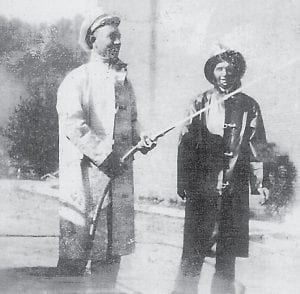 Thursday, September 27, 1956 Wednesday, October 3, has been set as the opening date for the beautiful new Ford Motor Company dealership building on Madison Street in Whitesburg. The building is owned by the Harlow brothers, Clarence and Carl, and will display the latest 1957 Ford autos, trucks and equipment when it opens. The two brothers are World War II veterans.

. Several Letcher County residents are planning a motorcade to Lexington to hear President Eisenhower speak there next Monday, October 1.

. Two local nursing students received minor injuries after being involved in an auto accident at Campton while on their way to Louisville to take their state board examinations. Mary Wright, daughter of Nick Wright of Letcher County, and Betty Hays, daughter of Mrs. Steve Hidvegi of Pound, Va., recently graduated from Good Samaritan Hospital of Nursing in Lexington.

The department’s two trucks were parked in front of Whitesburg City Hall shortly after it opened in 1947. The city, fire department and police department shared the space.

. The 1956 football squad at Whitesburg High School has elected Miss Ella Yonts to reign as the team’s homecoming queen.

Coal mine accidents during August caused 30 deaths in the U.S., but the fatality rate was the lowest for any month this year. Through August 31 there were 306 coal-mine fatalities this year, compared with 294 in the similar period last year.

. The Whitesburg Yellowjackets rolled past the Cumberland Redskins 28-6 on the Whitesburg football field Friday night.

Thursday, September 29, 1966 The Appalachian development program faces a sharp cutback in federal funds as the result in the war in Vietnam. This was the word this week from John L. Sweeney, federal co-chairman of the Appalachian Regional Commission. 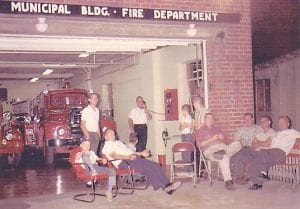 Firemen relaxing in front of the old city hall was once a common scene in downtown Whitesburg. The building now serves as the home of The Mountain Eagle.

. More than $83 million in federal war-on-poverty money has been spent in Kentucky in the last 18 months.

. The State Economic Security Department has immediate openings for 40 social workers to certify the eligibility of applicants for food stamps in the 22 counties where the federal stamp program will be in effect soon.

. Remious Day Sr., who had been fire chief of Whitesburg for the past 20 years, died September 23 at the Whitesburg Appalachian Regional Hospital. He was 44. Day had been a patient at the hospital here for 29 days before his death and was critically ill much of that time. He had undergone emergency surgery and numerous blood transfusions. He had been ill for the past several years. He was a World War II veteran and former president of the Kentucky Fireman’s Association.

. Congressman Carl D. Perkins joined Virginia state officials and congressmen Saturday to dedicate the $20 million John W. Flannigan Dam on the Pound River near Haysi, Virginia. The structure’s chief purpose is to provide flood protection for Pikeville, Paintsville, Prestonsburg and other points along the Big Sandy River in eastern Kentucky. 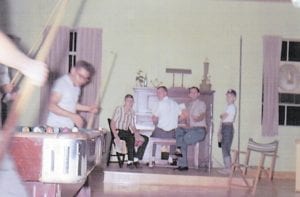 A pool table and piano were available to firefighters on the second floor community room of the old Whitesburg City Hall.

. Army Private First Class Wendell Boggs, 25, son of Mr. and Mrs. Fred Boggs of Kingscreek, has been assigned to the 25th Infantry Division in Vietnam. He is a 1960 graduate of Kingdom Come High School and attended Morehead State College.

Thursday, September 30, 1976 Letcher County Attorney Leroy Fields and Assistant County Attorney Peyton Reynolds handed in their resignations this week to County Judge Estill Blair. Fields said that he had planned to retire, but refused to comment further when asked if recent conflicts with county offi cials played a part. Fields told reporters he would leave that up to the “imagination.” Reynolds said he would leave the reason for the resignations “to speculation.” “Everybody knows anyway,” he added. 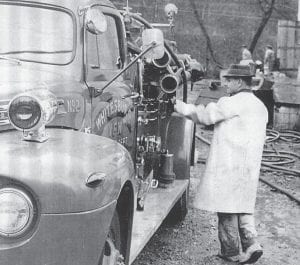 Late Whitesburg Fire Chief Philmore Bowen was chief of the VFW Fire Department in Whitesburg when this photo was taken at the scene of a fire at the RC Cola Bottling Plant at Ermine in 1966, a short time before Bowen would replace Chief Remious Day.

. Legal briefs on Kentucky Power Company’s request for a nearly 30 percent rate increase were filed with the state Public Service Commission last week, and a decision on the case is expected October 19. The power company, a subsidiary of American Electric Power, serves most of Letcher and 19 other eastern Kentucky counties. It filed for the rate increase April 29, the first such request in the company’s 50-year history.

. Robert Barrett, administrator of the federal Mining Enforcement and Safety Administration (MESA), said last week that charges would “definitely” be brought against officials and employees of the Scotia mine, where two coal mine explosions killed 26 men last March.

. Letcher County will receive $240,649 for its coal severance economic aid fund in the coming year, approximately 15 percent less than anticipated.

. Mrs. Carlene T. Frazier has been appointed postmaster at Blackey. Mrs. Frazier began her career with the postal service in 1949 as a substitute clerk at the Neon post office. Mrs. Frazier served continuously as a clerk at the Whitesburg Post Office from 1959 until she was named officer-in-charge at the Blackey office eight months ago.

Wednesday, September 24, 1986 Record numbers of eastern Kentucky students entered college for the first time this fall, and some observers think enrollment figures may signal an historic change as more and more mountain youth decide a high school education is not enough.

. A new park is under construction at the Jenkins Reservoir on Lakeside Drive.

. James Adams, formerly of Letcher County and now superintendent of schools in Indianapolis, Ind., is one of six men being considered for the presidency of Morehead State University.

Wednesday, October 4, 2006 The Letcher Fiscal Court will meet next week to determine how $3.2 million in coal severance tax funds will be spent. Letcher County Judge/Executive Carroll Smith said the court will vote on “how to prioritize” 17 expenditures recommended by the court during the last year.

. Rock legend Alice Cooper will appear in Pikeville on Saturday. He will perform hits like “School’s Out”, “Elected” “Welcome to My Nightmare” and “Only Women Bleed”.

. The Letcher County Board of Education accepted a bid of $62,500 for the Fleming-Neon High School property from Eb Wright.

. Former Letcher County Judge Stephen Estill Blair died September 26 at the age of 85. He was the founder of Blair Insurance and Blair Funeral Home, and served as county judge in the early 1970s.