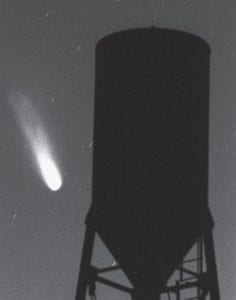 20 YEARS AGO IN THE SKY — The Comet Hale-Bopp is shown passing behind an old water tank in this timed exposure taken in Stanfield, Ariz., in 1997, where the comet was originally discovered by Thomas Bopp, a Glendale, Ariz., mechanic. The very best window for seeing the comet was in the evenings of March 26 to April 10, 1997. when moonlight didn’t interfere, said Steve Kates, president of Sky Source Inc. of Phoenix. (AP Photo/Casa Grande Dispatch, Francisco Medina)

Thursday, April 21, 1927 Six murder cases will be tried during the next term of Letcher Circuit Court, scheduled to start May 9. Also on the docket are the cases of 10 parents indicted for not sending their children to school and one case of horse theft.

Excavation is underway for the building of the new grade school in Whitesburg. The building, scheduled to be finished in 120 days, will cost $25,000 and will have six classrooms, a basement, and a large auditorium.

Keith Crune of Bardstown, Kentucky has accepted the position as druggist at the Fitzpatrick Drug Store in Whitesburg. He is a graduated of the University of Louisville School of Pharmacy and comes to Letcher County well recommended. He is a young man and unmarried.

Work has begun in installing a sewer system in the Collins-Harvie addition to the City of Whitesburg. L.E. Harvie and Sam Collins are doing the work.

Two stills were destroyed during raids illegal liquor operations at the head of Cumberland River in Letcher County. At least 1,500 gallons of beer was destroyed at the home of Joe Mullins, who was charged with operating a still.

Carl Pigman, son of Dr. and Mrs. Owen Pigman of Sergent, was home from the University of Kentucky for the Easter holiday.

Thursday, April 22, 1937 Bids for construction of the new Whitesburg Post Office will be open in Washington, D.C., on June 1. The federal government has already spent $6,000 for a building lot in downtown Whitesburg.

Was Daniel Boone ever in what is now Letcher County? That’s the question being asked in this week’s “It Is So” feature in The Mountain Eagle. It is thought that during Boone’s stay in Kentucky he visited this section after he came up the Cumberland River valley and crossed Pine Mountain into the Kentucky River valley, going as far up river to Boone Fork, which carries his name. Some of the first settlers in Letcher County found Boone’s name carved into an old beech tree near W.H. Potter’s home. The portion of the tree with Boone’s name on it was placed in a museum in Harrodsburg. Boone’s name was also carved into another tree on the head of Ice Hall branch, just below the large bottom at Mayking, and was still there when John Adams settled at the mouth of Bottom Fork around 1800.

The sounds of bullfrogs coming from the “lake” on Whitesburg’s Main Street have become a disturbance for many.

Actor James Cagney stars in the film “Great Guy” showing Tuesday and Wednesday, April 27-28, at the Kentucky Theatre in Whitesburg.

Five Elk Creek boys have joined up with the Civilian Conservation Corps (CCC). They are Bill and Russell Bates, Paschell Dixon, Large Caudill, and Doyle Boyd.

Ed Hurst is the manager of Public Square Service Station in Whitesburg. The station sells Gulf gasoline and motor oil and Goodyear tires and tubes.

Thursday, April 24, 1947 The Southern Bell Telephone and Telegraph Company says it is willing to settle the strike by its employees through arbitration.

Fire has destroyed five businesses, five apartments, and a rooming house in downtown Harlan on April 20. At one point, the fire threatened to destroy four business blocks.

The trial of former Kentucky Congressman Andrew J. May, 71, of Prestonsburg, began Tuesday in Washington, D.C. He is charged with using his office improperly to aid the munitions manufacturers Murray and Henry Garrson in return for a $53,000 payment for his services.

Craft Funeral Home of Neon has a new manager. Marshall Lyons of Russellville, Kentucky, will replace Ferdinand Moore, who has moved to Whitesburg.

The Kentucky State Highway Patrol has opened a new radio station in Hazard, its fourth now in operation. Other stations already in operation are at Frankfort, Bowling Green, and London. Others under construction are in Madisonville, Morehead, and Elizabethtown.

The Letcher County Health Department reports it has not seen a case of smallpox here since 1932, but points to recent outbreaks elsewhere in the United States as a reason why everyone should be vaccinated. “Anyone who does not possess a smallpox scar on his or her arm is capable of getting this dreadful disease,” the department says.

Letcher County is the home county of

57 students now attending the University of Kentucky in Lexington.

The Brandham & Smith Liquor Store at Burdine was burglarized Thursday night. Bloodhounds have been called in to help police officers catch the thief for thieves who made off with 16 cases of liquor.

Thursday, April 25, 1957 Several Letcher County citizens, many of them alumni of the University of Kentucky, are urging Kentucky Governor Albert B. “Happy” Chandler to locate the new UK-affiliated junior college promised for Harlan County inside the City of Cumberland. Those interested in bringing the two-year school to southeastern Kentucky say the Cumberland site would serve Letcher residents much better than a proposed site inside the City of Harlan. “We have just given Harlan County assurance it will get a school, but they offered us six locations,” Chandler said while urging that any site controversy be cleared up quickly. “There was some disagreement among the people about the locations. We don’t like to be shouldered with those problems.”

Funeral services were held Monday in Neon for John Victor Quillen, 42, who died Saturday as the result of a gunshot wound. Letcher County Coroner Virginia Craft has not ruled on whether the shooting was intentional or accidental.

Four more prisoners were able to break out of the Letcher County Jail by sawing their way through bars on an outside window in the “big cage” located on the jail’s second floor. Jailer Johnny Fulton said he has no idea how the inmates, three of whom were being held on store breaking charges, got the hacksaw blades used in the breakout. The fourth inmate was arrested after he was found driving drunk on the wrong side of the road.

VFW Post 5829, Whitesburg, is this year’s winner of the annual Community Service Award for Kentucky. The veterans club now advances to national competition for the award.

“Mr. Texas,” a film billed as “the world’s first Christian western,” will be shown Friday night in the Whitesburg High School auditorium. The full-length color feature revolves around the Billy Graham Crusade in Fort Worth, Texas.

Carl Smallwood, a veteran of World War II and the Korean War who was decorated after being wounded three times, has announced his candidacy for the office of police judge for the City of Whitesburg.

Old-fashioned Betsy Ross enriched bread is “fresh … as a summer shower,” boasts an advertisement appearing in this week’s edition of The Mountain Eagle.

Thursday, April 19, 1967 Former state highway commissioner Henry Ward, campaigning for the Democratic nomination for governor of Kentucky, told Letcher County residents this week that construction of the Ky. 15 bypass around Whitesburg is likely to be further delayed “because right now there’s no way to build it without tearing down half of Whitesburg.” Ward said until a satisfactory route can be engineered, funds for construction of Ky. 15 will be spent mostly between Hazard and Jackson.

August Codispoti of Whitesburg is serving as chairman of the 1967 Red Cross fund drive in Letcher County.

A five-pound bag of Domino sugar is on sale at the Whitesburg A&P for 39 cents.

Thursday, April 21, 1977 “Inexcusable” is the only way to describe United Mine Workers of America (UMW) representation in eastern Kentucky, where seven out of every eight miners is non-union, according to Harry Patrick, UMW secretary-treasurer. “In an area where most of the mines were once union, 35,000 of 40,000 miners are nonunion in District 19 and the figures are comparable in District 30.”

In the violence-ridden strike at Stearns Mining Co., two employees of Storm Security Co. were shot, one seriously, while attempting to bring three security guards out of McCreary County. The two men were shot, allegedly by miners involved in the strike, as they stopped in front of a picketer’s house 10 miles west of the Stearns mine.

Deborah Hammock, daughter of Mr. and Mrs. Jack Hammock of Whitesburg, was crowned Miss Letcher County for 1977. She is a senior at Whitesburg High School, where she is a member of the girls’ basketball team and a cheerleader.

Wednesday, April 22, 1987 The Rev. Webb Kennibrew, pastor at the Mount Olivet Baptist Church, plans to begin a center to counsel those with drug and alcohol addictions.

State officials have asked that Letcher County and its three cities be ineligible to receive any grant money that would lead to community growth until the Letcher Fiscal Court adopts a solid waste disposal plan and brings the county landfill into compliance with state law. What effect the state’s request could have on the county became evident this month when the Kentucky State Clearinghouse refused to recommend that the federal government help the City of Whitesburg expand water service to the Whitco community. The State Clearinghouse asked that Whitesburg not receive a $1.2 million community development grant because the county landfill does not have a state permit.

The Letcher County Board of Education advisory council has asked the board to support a policy to put guidance counselors in grade schools.

Wednesday, April 23, 1997 The burning of a restroom at Fishpond Lake Recreational Area is under investigation by Kentucky State Police Trooper Chuck Bledsoe. The arson occurred shortly after county worker John Lucas finished re-plumbing the facility to renovate the restroom for Memorial weekend celebrations. The restroom was vandalized two years ago and has since remained closed.

Top staff members of the Kentucky Department of Education say that “things seem to be moving very smoothly” in the Letcher County school system as the state winds down three years of efforts to improve the system’s management.

For the rest of April, and possibly part of May, comet Hale-Bopp will appear as an evening object in or near the constellation Perseus, which stands fairly high in the northwest a couple of hours after sunset. Then the comet will start veering away, spending the next 1,500 years traveling away from the sun and the orbit of the earth.

Wednesday, April 25, 2007 The Starlite Café is first in line to become the first restaurant in 60 years to sell alcohol legally in the City of Whitesburg. Anthony C. Cowdon, who owns the restaurant, is the first person to publicly announce his intention to apply for a “limited restaurant alcoholic beverage by the drink” license from the state Department of Alcoholic Beverage Control in Frankfort.

Students from Beckham Bates Elementary School are being spotlighted on two “American Idol” airings this week. Producers from “American Idol” visited the school to videotape students who participate in Save the Children literacy programs.