Thursday, June 30, 1927 Letcher County residents are being cautioned not to eat any raw vegetables from gardens that were covered by floodwaters recently. “Many cases of dysentery, diarrhea, typhoid fever, etc., can be traced directly to the eating of vegetables, uncooked, from such gardens,” says the Kentucky Board of Health.

. As of Monday night, 5,266 Letcher County residents were vaccinated against typhoid fever.

. Kentucky Governor William J. Fields visited Whitesburg last Thursday night, where he was a guest at the Daniel Boone Hotel. The governor was in town to voice his support for Kentucky House Speaker Robert Crowe, who is opposed by U.S. Senator J.C.W. Beckham in the Democratic Primary for governor, to be held August 6. Gov. Fields was introduced by Whitesburg attorney Astor Hogg before he spoke to a jammed courtroom in the county courthouse. 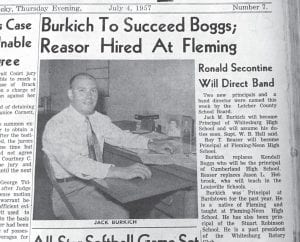 PRINCIPALS HIRED — The July 4, 1957 edition of The Mountain Eagle carried the news that Jack M. Burkich was hired as the new principal at Whitesburg High School, while Roy T. Reasor was chosen to lead Fleming-Neon High School.

Thursday, July 1, 1937 “Floyd County at one time comprised one-third of the state of Kentucky. Floyd County was the 40th county to be established,” The Mountain Eagle says in its weekly “It Is So” feature. “Parts of 20 counties have been taken away from Floyd County. Some of the counties created as a whole from what was once Floyd are Pike, Clay, Harlan, Perry, Lawrence, Johnson, Morgan, Breathitt, Knott, Letcher, Rowan, Boyd, Magoffin, Elliott, Wolfe and Lee.”

. Well-known animal lover and Whitesburg attorney John D.W. Collins has called on The Mountain Eagle to urge all political candidates to refrain from posting their campaign signs anywhere within the bottom three feet of utility poles in Letcher County. Dogs will love the candidates for their act of kindness, Collins said.

. The bottom floor is being constructed for the new Texas Service Station in lower Whitesburg. Builder Roy McClure says the station, which will be completed after building plans arrive from Louisville, will be one of the most modern in eastern Kentucky.

. Motorman Mynatt Hatfield, 35, was killed in a roof fall at the Millstone Mine on Tuesday afternoon. He was married and the father of four. Funeral services will be held Saturday in Dunlap, Tennessee.

. Kentucky Theatre manager Salene Thomas is threatening to wear a catcher’s mask the next time he has to try to keep order at the entrance to the Main Street venue. The popular Thomas made the remark after he was hit in the nose by an unruly young man as Thomas waited for Whitesburg Police Chief Newt Sturgill to break up a congregation of young men who were using profane language. Thomas swore out a warrant against the young man for disorderly conduct.

Thursday, July 4, 1947 Two men and a woman are being held under bond this week in connection with the death of 50-year-old George Washington Adkins, a Jenkins merchant who was found beaten to death near Elkhorn City Sunday morning. Charged are Fred Overstreet, 24, Napolean Adkins, brother of the slain man, and Napolean’s wife, Lucy Adkins. All three are being held under $5,000 bond on a charge of voluntary manslaughter. A coroner’s jury ruled Monday that George Adkins was killed after being struck by a blunt instrument. A hammer was found near his body. The dead man was reported to have left home on a buying trip and was said to have been carrying $400 in cash. Some $200 was still in his billfold when his body was found on a bridge near Elkhorn City. George Adkins, a Pike County native and World War I veteran, had lived in Jenkins for the past 20 years.

. The Bank of Neon opened its doors for business the first time on July 2. The bank was organized by the business and professional men of Neon and vicinity. It starts off with capital of $50,000 and a surplus of $50,000. Dr. D.V. Bentley is president; Dr. E.G. Skaggs is vice president; and Dan J. Harmon is cashier. The directors are James M. Caudill, Guy W. Jackson, and Willie Dawahare.

. In recognition for having mined 1,971,000 tons of coal without a fatal accident, the employees of Consolidation Coal Company’s Mine 206-7 have received a Certificate of Honor from the U.S. Bureau of Mines. In honor of the award, about 400 employees were treated to an outdoor picnic on June 22 at the Grant Vanover Farm near Shelby Gap.

. Novice jockey William Cook of Kona had the honor of riding a winner in his saddle debut in Detroit. For bringing 7 to 1 shot Hywick home by seven lengths, the 17-yearold Kona boy received a $100 bonus from the Detroit Racing Association. A son of Mr. and Mrs. Curtis Cook of Kona, he is riding for nationally known trainer Harry Trotsek.

. Three widows of Kona Coal Company miners will on July 6 receive the first benefi ts to come to Letcher County as a result of the health and welfare fund established in 1946 by the United Mine Workers Union and assessed from the coal operations. The fund is said to be reaching into the millions of dollars now and is expected to be a great blessing to the widows and orphans of miners if properly administered. Those receiving $1,000 each during a ceremony Sunday are Mrs. Nevada Isaac, Mrs. Lizzie Hughes, and Mrs. Bent Doyle.

Thursday, July 4, 1957 Jack M. Burkich and Roy T. Reasor were hired this week as the new principals at Whitesburg High School and Fleming-Neon High School, respectively. Burkich replaces Kendall Boggs, who has accepted the job as principal at Cumberland High School. Reasor is replacing Jason L. Holbrook, who has accepted a teaching job in Louisville. Both Burkich and Reasor are graduates of Fleming-Neon High. Burkich is returning to Letcher County after working a year as principal at Bardstown High School. He was also a principal at Stuart Robinson School at Blackey. Reasor will begin his first year as a school principal.

. Letcher Circuit Judge Courtney C. Wells has directed the July Letcher County Grand Jury to investigate bootlegging in Letcher County. “I am confident there has been some bootlegging going on in the county,” Wells told members of the grand jury. “This county is not in bad condition — it’s one of the best in the state — and we want to keep it that way.”

. The Shell Oil service station located at Payne Gap has been purchased by James Shelby of Elkhorn Avenue in Jenkins. It was formerly owned and operated by Kelly Adkins.

. Miss Willa Mae Holbrook, daughter of Troy Holbrook of Neon, has enlisted for a four-year period in the U.S. Marines. She is undergoing training at Parris Island, South Carolina.

Thursday, June 29, 1967 Kentucky State Police Trooper Roy Hall hit a black bear with his police cruiser on U.S. 119 near Millstone Monday night. Black bears are so seldom seen in this region that many people thought Hall was making up a “bear tale” until after the bear’s body was found near the North Fork of the Kentucky River. [See related story this page.]

. Funeral services were held in Blackey Wednesday for Elmer Whitaker Jr., of Miamisburg, Ohio. Mr. Whitaker was killed shortly after noon on Sunday when his car went off the road on Garner Mountain and he was pinned between the auto and a tree. His wife, Mrs. Frances McIntyre Whitaker, and her sister, who were passengers in the car, escaped serious injury. The accident occurred in a heavy rain after the Whitaker vehicle, which was going up the Letcher County side of Garner Mountain, swerved

to avoid another vehicle.

. Major Bernard Boggs, son of Mr. and Mrs. Harrison Boggs of Roxana, was promoted to Lieutenant Colonel in ceremonies in Athens, Greece.

. Unemployment compensation maximum benefits will be increased $2 a week to $47 for claims filed on or after July 1 of this year, state government says.

Thursday, June 23, 1977 The Commonwealth of Kentucky is asking nearly $100,000 in damages from State Contracting & Stone Co., charging that excavation at its Pine Mountain quarry caused crumbling and slippage on portions of Hwy. 119 between Whitesburg and Cumberland.

. Thousands of miners in eastern Kentucky, West Virginia and Alabama walked off the job in reaction to sharp cuts in medical benefits — aimed at stopping wildcat strikes. A letter sent to 821,000 participants in the United Mine Worker Health and Retirement Funds, now administered by a three-member board separate from the union, announced that beneficiaries would no longer get complete medical coverage. Instead, they will be required to pay the first $250 in hospital bills and 40 percent of all doctors’ bills up to $250. Prior to the cut, the Funds paid all medical bills for miners and their families.

. Tomatoes are on sale for 39 cents a pound at the Whitesburg A&P store. Whole watermelons are $1.79 each.

Wednesday, June 24, 1987 The Letcher County Fiscal Court is considering a $1.5 million bond issue to pave rural county roads. The action was discussed at the court’s regular June meeting, but it would be about 90 days before the bonds could be sold if the court decides to go ahead with the plan, County Attorney Harold Bolling said. The county maintains about 400 miles of roads, most of which are dirt or gravel. County Judge/Executive Ruben Watts said paving as many of those roads as possible will save money in the long run.

. The Whitesburg City Council has adopted a recently completed downtown revitalization plan for the city. Mayor James Asher gave copies of the plan to the councilmen, briefly outlining the major items. The city can create 98 new parking places in downtown for about $150,000, the plan says, less than one-third of the cost of building a

150-car parking structure. The plan calls for paving the dirt parking lot near the railroad tracks on East Main Street, changing from parallel to perpendicular parking on Railroad Street, and reorganizing the Broadway parking lot. The study also urges the city to create an “enterprise zone” near the bypass off-ramp, and to actively seek a national hotel chain to locate on that property. The hotel would be located near a new bridge which the study proposes be built between Broadway (behind the Letcher County Courthouse and the Hobbs building) and Railroad Street.

Wednesday, June 25, 1997 Fleming-Neon High School and Fleming Neon Elementary School may get a facelift similar to the construction work done over the past three years at Martha Jane Potter and Cowan elementary schools.

Wednesday, June 27, 2007 Hobart Elkins, an elderly Partridge man, was robbed of $19 before he was stabbed to death by a much younger assailant who “needed money for a pill,” a Kentucky State Police detective has testified. Det. Randy Combs said that 22-year-old Jonathan Keith Marlow murdered Elkins by stabbing him between 15 and 20 times after he saw “something green” inside a billfold Elkins was carrying.

. Despite free government programs, only about 16 percent of Kentucky miners get screened for black lung — about half the national average for coal-mining states. Many miners avoid screenings out of fear of losing their jobs, the Courier-Journal of Louisville reported this week.

. The Letcher Fiscal Court has unanimously voted to authorize County Attorney Harold Bolling to explore the possibility of joining the Pike Fiscal Court as a plaintiff in a suit against the manufacturer of Oxy- Contin. Pike County magistrates voted earlier this month to authorize attorney Gary Johnson to determine whether the county has a legal case against OxyContin’s maker, Purdue Pharma. County records show that since 2005, Pike officials have dumped more than $7 million in bonds and coal severance tax money into the fight against prescription drugs.