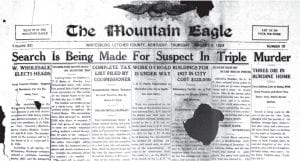 TRIPLE HOMICIDE NEAR JENKINS HAPPENED 90 YEARS AGO THIS WEEK — What is left of this front page from the January 5, 1928 edition of The Mountain Eagle carries the news of shooting deaths of a Burdine man and woman and their nine-yearold daughter. The shooter, believed to be the brother of victim George Gary, spared the lives of the couple’s other two daughters, ages 5 and nine months. The 5-year-old told police that suspect Dan Gary fired the fatal shots after asking about a $20 gold piece.

Police are searching for a man they say is responsible for the shooting deaths of a Burdine couple and the couple’s nine-yearold daughter. Authorities are looking for Dan Gary, who is charged with murdering his brother and sister-in-law, Mr. and Mrs. George Gary, and his young niece, Ruth Gary, inside the family’s Burdine home on December 29. Dan Gary was charged with the three murders after George Gary’s fiveyear old daughter, Virginia, who was spared along with her nine-month-old sister, gave police details of the murders. According to Virginia, she and her parents and sisters were already in bed when Dan Gary came to the home to retrieve a $20 gold piece that belonged to George Gary’s wife. When the triple murder was discovered last Friday, Dan Gary’s rain-soaked coat was still inside his brother’s home. The two surviving children were cold, hungry, and scared but otherwise unharmed and have been placed with an uncle near St. Charles, Virginia. George Gary’s body was found shot down near the front door, dressed in nightclothes. Mrs. Gary was shot as she sat up in bed. Evidences shows the little girl, who was found in a bed with her head buried in a pillow, apparently lived for some time after the shootings. The Gary brothers were coal miners, but Dan had been without work since November. The brothers originally came to America from Canada. The late Mrs. Gary was raised in St. Charles, Virginia.

One of the coldest waves in years hit Letcher County over the weekend. Beginning with a warm rain around noon Saturday, the weather began to shove the thermometer down until the instrument showed five degrees below zero in front of the First National Bank in Whitesburg on Monday morning. “Much suffering is reported in northern cities, and several deaths from freezing have been reported,” The Mountain Eagle reports.

The new Whitesburg High School gymnasium is now finished except for the heating plant, which is expected to be operating in time for Saturday’s first game against Blue Diamond.

Anderson Sturgill of Eolia fell dead Friday inside Doc Maggard’s Store. He had been sick for several days, but had been able to “go about,” The Eagle reports.

C.H. Back is the new manager of the Daniel Boone Hotel in Whitesburg. He replaces G. Bennett Adams, who will devote all of his working time to teaching school and preaching in the Old Regular Baptist faith.

Whitesburg’s new city council has met four times — three of them special sessions — since its members were sworn into office January 3.

The University of Kentucky has established its 26th radio listening center, this one at the Linefork Cabin at Gilley in Letcher County. Mr. and Mrs. R.E. Baker, who work with the Pine Mountain Settlement School, will be in charge of the new station.

Letcher County farmer Lawrence King harvested 2,597 pounds of honey from 46 stands of bees in 1937. The crop sold for 25 cents per pound, leading County Agent Boyd E. Wheeler to remark that beekeeping can be a profitable enterprise here. Thursday, January 8, 1948 Five Letcher County residents are charged with murder in the first indictments returned by the Letcher County Grand Jury in its first report of 1948. Named in the indictments are Mr. and Mrs. Leonard Fields, their son, Charlie, and Willard Collier, all of whom are accused of killing Letcher County Sheriff ’s Deputies Willard Hall and Dave Galloway in December, and Homer Davis of Neon, who is charged with killing former police officer Shelby Lequire inside a Neon barbershop to settle a score that began when Lequire shot Davis three years ago.

The Whitesburg Gas Company will open January 10 in Whitesburg in the building formerly occupied by Evans Funeral Home. The new business will carry a complete line of gas and electrical appliances.

Uncle Hiram Banks, 93, of Cowan, died Tuesday morning after fire swept through his home on Cowan. Considered one of Letcher County’s best-read men, Uncle Hiram, an eccentric man also known as “Drummer Hiram,” had saved some of his books from flames and had gone back inside his home to try to save other books when he was overcome. “He was a good citizen who believed in living his own life in his own way and letting all others do likewise,” The Mountain Eagle reports. “He had traveled all over the country and had lived in several different states and had reportedly been in all of them.” Uncle Hiram held the job as postmaster in Harlan for four years, beginning in 1888.

Pike County Deputy Sheriff John Henry Steffey, about 45, died at the Jenkins hospital Wednesday night after he was shot and killed near the Letcher-Pike county line Wednesday night, just a few hours after he had resigned his position. Charged with murder in connection with the incident is James Smallwood, 30. Authorities say the shooting occurred when Steffey, of Robinson Creek, was riding with Pike County Deputy Sheriff Sam Guy and the two stopped after passing through the Dorton to investigate a disturbance. Deputy Guy said that after the two exited his car, Steffey was shot in the stomach just after they came into the glare of headlights. Smallwood surrendered three hours before Steffey, who had resigned because of personal reasons, died.

An eight-year-old Letcher County boy accidentally shot and killed his four-yearold sister Sunday while playing with a .12-gauge shotgun at the home of their grandmother on Rockhouse, near Deane.

Elkhorn Coal Corporation’s Hemphill No. 6 Mine at Jackhorn is producing 2,400 tons of coal per day while employing 421 men.

“The more you reduce the whiskey traffic in Letcher County the better county you’ll have,” Special Letcher Circuit Judge S. H. Rice told member of the January Grand Jury in his instructions to them this week. Most other law violations result from the use of whiskey, said Rice, who was appointed to Letcher and Perry counties while Judge Courtney C. Wells remains involved in an election lawsuit with Whitesburg attorney Emmett G. Fields.

Letcher County Treasurer Herman Hale and former County Attorney Gordon R. Lewis have sued former Sheriff Robert B. Collins in an effort to recover $8,115.48 they claim Collins owes the county under a finding by the Office of the State Auditor of Public Accounts.

Arrangements have been made to send 138 pupils at the burned-out Seco School to classrooms in Tollivertown, Kona, and Haymond. The six-room school burned last Friday. The building was owned by South- East Coal Company.

The 62-bed Fleming hospital, in operation since 1917, will close its doors and go out of business on or about February 1. The hospital has been privately operated by Dr. E.G. Skaggs and Dr. A.B. Carter Jr. with the help of Dr. Roscoe Acker. Skaggs and Carter are leaving for Paintsville. Acker will remain in Fleming to practice. The Fleming hospital is the second in Letcher County to close after the establishment of the United Mine Workers Union-owned Whitesburg Memorial Hospital. Dr. B.F. Wright closed the Seco hospital two years ago.

A recap of Page One headlines which appeared in The Mountain Eagle in 1967 included:

March 23 — Schools and roads get biggest slice of state money in Letcher County; Highway workers try to keep US 119 from sliding off Pine Mountain.

The 1978 Kentucky General Assembly will be asked to consider major changes in coal severance tax laws, including a broadened tax base and a 50 percent return of all money collected to mineral producing counties. The current law, collecting a 4.5 percent tax per ton of coal mined, generated $116.6 million in fiscal 1977 and next year $124 million is expected.

Very little picketing was reported over the Christmas weekend in eastern Kentucky as the United Mine Workers’ contract strike entered its fourth week and union workers cashed their last paychecks. State police said an estimated 70-75 pickets appeared early Tuesday at the Marlowe mine near Whitesburg, but no other activity was reported in Letcher County.

Letcher County’s population is expected to reach 36,270 in the next dozen years and 57,772 by the year 2020. The Kentucky River Area Development District, which includes Breathitt, Lee, Owsley, Wolfe, Leslie, Knott, Perry and Letcher counties, is expected to have a 20 percent population increase by 1990 and an 80 percent growth by 2020. Letcher is projected to be the fastest growing county in the district.

”We had a white Christmas after all,” writes Ice correspondent Sara C. Ison. “The old folks would have called it a ‘Dommey- Necker’ snow, and they are the very worst kind, especially if that little thin wind is blowing.”

The Webb Companies, a Lexingtonbased real estate development firm, has announced plans for an $8 million resort and marina complex to be developed on Lake Cumberland near Jamestown. Letcher County natives Donald and Dudley Webb, brothers, head the Webb Companies.

Police say drunk driving arrests were up over the New Year’s holiday, but other crime was down. Kentucky State Police in Hazard say they charged 28 people with driving under the influence over the fourday weekend. Police said that during a normal weekend, they might make two to four DUI arrests.

Three men were charged with first-degree robbery, just hours after they allegedly made off with $136 in cash and a couple of packages of cigarettes after using a knife to rob a clerk at the Ermine Double Kwik. A state trooper was able to identify the men after he watched a film of the suspect taking off his ski mask and looking into a security camera.

Greg Caudill, writer of Fishing with Gabby in The Mountain Eagle, celebrated writing his 100th column, saying “This has been a great two years for Fishing with Gabby, but without you, the readers, viewers and supporters, none of this would be possible. I thank you, each and every one.”

The Lady ‘Jackets rallied from an opening loss in the Berea Lady Pirates Invitational to win three straight games and take the consolation championship in the tournament.

While coal production in Kentucky and other central Appalachian states dropped significantly in 2007, the region is expected to benefit in 2008 from a surging international demand for power plant-quality coal that is mined here.

Construction will soon begin at Carr Fork Lake in the vicinity of the Carr Creek Marina recreational area. The work will involve installation of stone protection along the shoreline of the lake and modifications to drainage pipes, sidewalks and other areas with the recreational area.

”All teachers, retired and current, need to become aware of the dangers to our retirement benefits,” says Joyce Whitaker, president of Letcher County Retired Teachers. “There’s a movement to change our ‘defined benefit’ retirement in which we receive a retirement check for as long as we live to a ‘contributed’ benefit,’ similar to a 401K in which our benefits could run out before our end of life.”

Eighty-two children joined dozens of Kentucky State Police troopers last month for a shopping spree at the Whitesburg Walmart. Troopers and dispatchers from the Hazard post bringing children they meet during the year to Whitesburg from Breathitt, Knott, Leslie, Letcher and Perry counties. Each child is allotted $125 to buy whatever he or she wants.