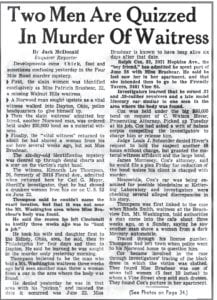 In July 1958, Blackey area residents were mourning the death of Miss Patricia Beshear, who was murdered near Cincinnati. Shown above and below is some of the Cincinnati Enquirer’s coverage of the murder, which apparently was never solved.

Thursday, July 26, 1928 A fatal accident near Jenkins Sunday afternoon is the sixth traffic death recorded in Letcher County since May 22. John Fraley, an employee of Boone Motor Company of Whitesburg, died in the Jenkins hospital Sunday, the morning after he lost control of the Star coupe he was driving at the horseshoe curve just this side of Jenkins. Two passengers in Fraley’s car, Dave Speaks and Walter Speaks, were seriously injured and are being treated in the Jenkins hospital. The three were on their way to Middlesboro about 10 p.m. Saturday when they ran into heavy fog.

. The Whitesburg to Hazard road is now open for travel.

. The interior of the Daniel Boone Hotel in Whitesburg is getting a new coat of paint.

. Letcher Circuit Court Judge R. Monroe Fields has ordered a halt to smoking tobacco in the circuit courtrooms in Letcher and Pike counties. 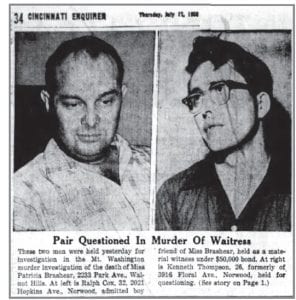 . The annual foot-washing service for the Thornton Church of Old Regular Baptists was held at Mayking Sunday with more than 500 people present. About 90 of those present took part in the foot washing.

. The contract for grading and draining the Hemphill-to-Beaver Gap road, a total of 2.4 miles, was awarded to E.K. Stone Company of Whitesburg for $85,715. 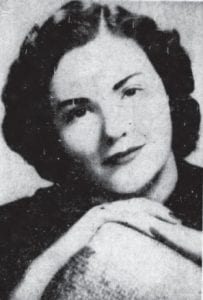 The body of Patricia Brashear was found near Cincinnati in July 1958. Related stories appear elsewhere on this page.

. A Letcher Circuit Court jury has found Jim Day not guilty in the death of Chester Cornett. Day pleaded self-defense, stating that Cornett was advancing toward him with an open knife when he defended himself.

. The first wet-dry referendum under Kentucky’s new local option law will be held in Mt. Sterling on September 16. The 1948 state legislature amended the state’s local option law to allow cities of the first four classes to hold wet-dry election independent of rural precincts. Previous wet-dry votes were taken on a countywide basis.

. A federal coal mine inspector has commended many recent safety improvements in South-East Coal Company’s Seco No. 1 Mine, which employs 225 men and produces 1,750 tons of coal per day.

. “Always be considerate of others; Give party called time to answer; Try not to interrupt when line is in use, and Release line in emergency,” are the tips for a “smooth party line partnership” being pushed on Letcher County customers by the Southern Bell Telephone and Telegraph Company.

. The Universal “Jeep” is now being sold at Ammerman Motor Company in Whitesburg.

. Dr. T.V. Vaughn has moved his office to East Jenkins.

Thursday, July 24, 1958 The Letcher County government had its water cut off — literally — this week. The Whitesburg Municipal Waterworks cut off the water supply to the Letcher County Courthouse as part of a routine procedure under which it cuts off water when a customer has not paid a bill for 90 days or more. The county owes $200 in past due water bills over a five-month period.

. Mrs. Cuba Long, the former Miss Cuba Frazier of Kingdom Come, is pictured on the front page of this week’s edition of The Mountain Eagle with a portion of the 40,000 women’s handbags she makes and markets each year. She is now recognized as one of the nation’s foremost producers of ladies’ handbags. She employs 20 persons at her plant in Maryville, Tennessee.

. Kentucky’s newest and finest resort motel, La Citadelle, was opened in Hazard this week. The 40-unit structure, considered one of the most modern motels in the South, is located 2,000 feet above sea level and two miles from downtown Hazard. Each unit is air-conditioned and has its own sun terrace.

. A group of residents in the area around Marshall’s Branch School want the Jenkins Independent School System to take over education of their children.

. The Whitesburg Municipal Swimming Pool will be open on Saturday night for the rest of the season under operation of the Junior Chamber of Commerce (Jaycees).

Proceeds from the “Saturday Night Swimming Parties” will be used to help pay for construction of the tennis courts next to the pool. Admission is 75 cents.

. Property owners in the City of Whitesburg have been notified that they must connect their property with the city sewer system by September 1 or face prosecution.

. Blackey area residents are mourning the death of Miss Patricia Brashear, whose body was found in the woods near Mt. Washington, Ohio. The 22-year-old daughter of the late Harlan Brashear of Viper had been missing for 11 days before her body was discovered. Miss Brashear, who had been shot in the head, had been living near Cincinnati in Walnut Hills, where she worked as a waitress. Two men are being questioned in connection with the case. Her body was returned to eastern Kentucky for burial.

. Dan Combs, manager of the Marlowe company store, has returned home after taking his family to Douglas, Wyoming. While in the West they visiting Yellowstone National Park, where they saw the Old Faithful geyser, then drove up to see the scenic and snow-covered Pike’s Peak, which is located near Denver, Colorado and stands 14,000 feet tall.

. The student enrollment at Pikeville College is being limited to 500.

Thursday, July 18, 1968 Opening of the new, modern Letcher County Vocational School is scheduled for August 8. More than 200 students are already enrolled for the fall term. The staff of the new school will include James Estep, coordinator; Sue B. Morrow and Major Sparks, business and office instructors; John Preston, carpentry instructor; John Roark, welding instructor; Marvin Breeding, electricity instructor; and Billy Risen, drafting instructor. There is a vacancy in the position of auto mechanics instructor. The new school is a product of the federal Appalachian Development Act, with a major part of the funding coming as a gift from the federal government.

. A record $358,511 was paid out in Social Security benefits to 5,554 residents of Letcher County in February.

. Ice correspondent Siller Brown points out that it is time for katydids to start predicting the date of the first frost. “They usually start katydid and katydidn’t between the 12th and the 20th. Then it’s 90 days till frost. Count the days and see … The joys of life are in the little hidden mysteries along life’s pathways, which are often trodden underfoot beneath the notice of so many.”

Thursday, July 13, 1978 Jenkins officials manned the pumps this week when city water plant workers went on strike after learning that the city clerk, who was on vacation, had neglected to write out paychecks. Workers have now returned to their jobs and water is flowing through the pipelines of Jenkins.

. The Letcher Fiscal Court voted itself a salary increase, termed a “cost-of-living adjustment,” and raised the daily pay for election officials. County magistrates will now collect their base salary, $560 a month, plus a percentage increase base on a 6.75 inflation factor, for a total of $597.50 per month. The court also voted to raise daily fees for election officials from $15 to $50.

Wednesday, July 20, 1988 Fleming-Neon High School, Arlie Boggs Elementary School and classrooms in the Whitesburg High School gymnasium will be renovated next year with money from a new state bond issue. The school district will receive about $159,000 a year for the next 20 years from the state to make payments on a bond issue for the projects.

Jenkins city and Letcher County officials say it will be the fault of CSX Railroad if Number 2 Bottom at Burdine floods again. In repairing the railroad tracks through Burdine in Jenkins last week, CSX employees dumped dirt into Elkhorn Creek — four years after the county dredged the stream to prevent flooding.

. Coca-Cola Bottling Company Consolidated, established here at the Coca-Cola Bottling Works of Whitesburg, will close its Whitesburg operation by the end of July. Employees have been offered positions in the company’s Norton office, and 13 of the 14 workers have accepted.

Wednesday, July 15, 1998 Mortgage rates have fallen in Letcher County, but remain higher than rates now available in central Kentucky. Ten- and 15-year mortgages are now being closed in Letcher County at interest rates between 9.25 percent and 10 percent. That’s down from the 11- to 12-percent interest rates that were common here last year, but still higher that the rates as low as 7.75 percent now available in Lexington.

. The family of Roger Stephens and Jarrod Breeding is caring for a newborn fawn the brothers found lying in a coal truck rut on the old South East Coal Company property. Their two younger brothers, Stephen Breeding, 10, and Scott Breeding, 6, help feed the deer, known as “Katie”, and pet her and play with her as if she was the family’s third dog. Their parents, Tim and Carol Breeding, got permission to nurse the fawn back to health from local game warden Frank Campbell, and plan to release her when the proper

. Isaac Gover, 5, and Justin Caudill, 8, won medals chasing chickens at the Dixie Stampede in Pigeon Forge, Tenn. They were on a field trip of the day camp held at the Cowan Community Center.

Wednesday, July 16, 2008 Verlin Ray Short is scheduled to make his first appearance in court next week to answer nearly 80 charges filed against him after a two-year investigation, focusing on the illegal possession, importation and buying and selling of reptiles in Kentucky. Short was arrested by three Kentucky Fish and Wildlife officers and faces at least 78 charges of illegally buying, selling and possessing venomous snakes. The officers seized 34 venomous snakes Short had in his possession, including a western diamondback rattlesnake, a great basin rattlesnake, timber rattlesnakes and northern and southern copperheads.

. Despite recent rain showers over the past few weeks, Letcher County is still considered to be in the beginning stages of a drought. “As of now, Letcher County is under ‘DO’ or abnormally dry conditions,” said Brian Schoettmer of the National Weather Service. “However moderate drought conditions exist just across the border into Virginia.”

. Country music singer/songwriter John Berry will be the headliner of the 2008 Jenkins Homecoming Days Festival which will take place August 21-23.