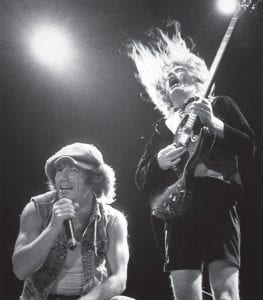 When AC/DC marked their first Top 40 hit! This week in 1985, AC/DC vocalist Brian Johnson (left), lead guitarist Angus Young and bandmates Malcolm Young, Phil Rudd and Cliff Williams were celebrating their first pop Top 40 hit, “You Shook Me All Night Long,” which entered the charts on October 25, 1980. According to The History Channel, AC/DC rank as the 10th-highest-selling recording artists of all time with 71 million albums sold — 30 million fewer than Led Zeppelin, but roughly five million more than both the Rolling Stones and Aerosmith and nearly 15 million more than both Metallica and Van Halen. (AP Photo/Houston Chronicle, Timothy Bullard)

THURSDAY, NOVEMBER 1, 1928 The Kentucky River Mining Institute entertained its members and invited guests with a large banquet held at the Daniel Boone Hotel in Whitesburg last night. More than 90 people attended the event, including coalmen M.K. Marlowe and L.H. LaViers.

. Enrollment at the Kingdom Come Settlement School has grown to 32. Twentytwo of those students are freshmen.

THURSDAY, OCTOBER 27, 1938 Miss Estelle Bates was brought to jail here in Whitesburg Tuesday evening after being charged with the fatal shooting of Homer Mullins, young son of former Constable Trigg Mullins of Jenkins. The cause of the killing is said to be jealousy on the part of Miss Bates. Homer Mullins, her former sweetheart, recently married another young lady.

. The former manager of Cowan Creek Coal Company at Ice, E.L. Knight, has returned from Princeton, West Virginia for a visit to Letcher County.

. The hottest political race in Letcher County with only one week left until the election? The contest between four men — Noah Gibson, Less Hogg, John H. Craft, and Jim Whitaker — for one seat on the Letcher County Board of Education.

. Leslie Hogg and John H. Craft are running for separate seats on the Letcher County Board of Education. According to their platform, both men “favor the administration of Watson C. Webb,” the county’s current school superintendent.

THURSDAY, OCTOBER 28, 1948 Consolidation Coal Company developing mine entries and constructing buildings necessary for the operation of the company’s new “Hendrix Mine” at Deane, in the No. 3 Elkhorn coal seam. The mine, which is expected to produce 6,000 tons of coal per day, is named in honor of Arthur Ray Hendrix, a paratrooper who was the first Consolidation employee from Letcher County to lose his life while fighting in World War II. The construction, which includes a large, modern coal washing plant, can now begin because the Chesapeake and Ohio Railway has completed its 24-mile extension to the mine site from Wayland in Floyd County and the Louisville & Nashville Railroad has finished its 16-mile extension to the site from Blackey. Both railroads will serve the new mine.

. Dock Bentley, 31, was sentenced to serve life in the state penitentiary after being convicted last Saturday in the robbery and stabbing death of Mrs. Lena Harris on Acme Hill, just above the railroad yards in Neon. Witnesses said that Mrs. Harris, who was black, had been carrying a large sum of money on her before she was murdered. A 16-year-old boy testified that he saw Bentley and another man, John P. Marcum, in the presence of Mrs. Harris before the stabbing. Marcum also faces trial in connection with the case.

. The first-aid team from Consolidation Coal Company’s Mine 214 won the annual Kentucky First-Aid and Mine Rescue Championship at Middlesboro on October 15 and 16.

. A 1985 photograph appearing on the front page of this edition of The Mountain Eagle shows people gathered on horseback and on foot outside the Camp Branch post office and store building then owned by Madison Collins.

. John Mason, 56, of Millstone, died October 25 of injuries he suffered in a roof fall inside the truck mine he owned and operated.

. Champion Stores Inc. employees in Jenkins and Van Lear ended their week old strike against the Pittsburgh, Pennsylvania based company and are now back at work. The strike affected about 100 clerks at 11 leading stores, a dairy bar, and a warehouse in the Jenkins area and two stores at Van Lear. The strike ended when the employees agreed to an eight-cent per hour wage increase.

. Mr. and Mrs. Owen Wright and son, Owen Wayne, were in Lexington last week visiting Mrs. Wright’s family members. While there they attended the races at Keeneland.

Mr. and Mrs. I.D. Back are the proud parents of their first child, a son named Ronald Wakefield Back.

THURSDAY, OCTOBER 30, 1958 South-East Coal Company announced this week it is willing to put up $50,000 toward construction of an airport to serve Letcher County. The announcement was made by South-East Vice President Virgil D. Picklesimer. South-East believes the airport should be located on the top of Pine Mountain on land now owned by Steve Caudill.

. Letcher County residents will go to the polls Tuesday to elect two school board members and to decide whether the county should replace magistrates with commissioners to handle county business. Voting machines will be used for the first time this election in 20 consolidated precincts. Paper ballots will continue in use in six precincts.

. Five generations of the family of Mrs. L.B. Tolliver of Whitesburg appear in a photograph on the front page of this week’s edition of The Mountain Eagle. The group includes Mrs. Tolliver and her daughter, Mrs. Nannie Logan of Whitesburg; Mrs. Macie Warf of Cromona, Mrs. Logan’s daughter; Mrs. Nancy Manning of McRoberts, Mrs. Warf’s daughter, and baby Lisa Karen Manning, born September 24 to Mrs. Manning and her husband.

. Miss Patti Richardson was elected Queen of Haymond School recently. She will be crowned November 5 at the Halloween Carnival at Haymond School.

“A spectacular team of Cavailers rocked the eastern Kentucky football scene by trouncing a favored Belfry eleven, 35 to 6, on its home field Friday night,” writes R. Percy Elkins, sportswriter for The Mountain Eagle.

. Hill Top Superette, located at the entrance to the Whitesburg hospital, has reopened under the new management of Flo and Harry Lucas.

THURSDAY, OCTOBER 24, 1968 A plan to create a special $1 million revolving fund, which will first be used in Whitesburg for development of an industrial site and for housing activity, has been approved by the Upper Kentucky River Development Association. As these projects are developed, they will be sold and funds will be recovered and rotated to another of the eight counties in the district. The money is coming to Letcher County as a result of a visit here by U.S. Senator Robert F. Kennedy, who held hearings at Fleming concerning the plight of mountain residents.

Dr. and Mrs. Sam Quillen of Neon and Mr. and Mrs. Willard Wright of Jenkins were injured in a crash at Big Stone Gap, Va. Police said the driver of the car which struck them, Thaddus Baker of Payne Gap, had suffered a heart attack and was dead before the crash occurred.

THURSDAY, OCTOBER 19, 1978 Escaped prisoners Vernon Pack, Joe Singleton and Ronnie Litton surrendered to Letcher County Sheriff Vernon Hall and a group of deputies after the officers stopped their attempt to leave Letcher County on an L&N coal train in Blackey. The officers went to Blackey in response to a call from Joe Begley, who said a youngster had told him there were three strange men hiding in a coal car.

. Atlantic-Richfield Co. and Weaver Oil Co. have acquired rights to explore for oil and gas in 917,000 acres of land in eastern Kentucky, and plan to put down two deep test wells within the next two years. The companies plan to drill below the Devonian shale layers, which have provided most eastern Kentucky gas production up until present time. The test wells will go down at least from 8,000 to 14,000 feet. Until now, gas wells in the mountains rarely have been deeper than 4,000 feet.

. A meeting will be held at 7 p.m., October 24, in the library in Whitesburg to find out who is interested in starting a Homemakers club in Whitesburg.

WEDNESDAY, OCTOBER 26, 1988 Dock Cornett is asking Letcher Circuit Court to order the State of Kentucky to return Lilley Cornett Woods to him. The woods, a 550-acre tract of virgin forest on Linefork in Letcher County, were preserved by Dock Cornett’s father, Lilley Cornett, beginning in the early 1900’s. Cornett and his brothers sold the property to the state in 1969 on the condition that it be preserved forever as a “living museum.” Cornett contends the state and its agents violated the provisions of the deed and has sued for damages and the return of the property.

. The broadcast on Kentucky Educational Television of a documentary by Appalshop of Whitesburg to show the effects of the broadform deed on several eastern Kentucky families was followed by a half hour of rebuttal from coal industry spokesmen.

Whitesburg defeated visiting Leslie County 20-15 Friday night behind a twotouchdown performance by senior Will Bledsoe. This was the Jackets’ ninth win in a row and their first district championship since 1982.

WEDNESDAY, OCTOBER 21, 1998 A Letcher County grand jury has charged Delania Hylton Fields, 37, of Roxana, with murdering her newborn daughter by smothering her inside plastic garbage bags. Kentucky State Police began investigating the infant’s death after a doctor treating Fields for a miscarriage determined that she had just given birth to a full-term baby.

. Astor Grant Fields, 21, and Leonard Fields, 20, have been charged with criminal mischief in connection with the theft and destruction of new E-911 road signs in the Kingscreek area. “Busting them up and throwing them over the hill is what they were doing,” said Letcher County Sheriff Steve Banks.

. Courtney Vaughn, 7, of Jeremiah, was fishing for her first time earlier this month when she caught a four-pound largemouth bass. The fish was caught in small farm pond at Perryville and was named “Old Dollar Eye” by Dan Cupps of Lexington, who had been trying to catch it for some time.

. Teco Coal Corporation agreed this week to give the City of Jenkins land for a new Head Start/Community Center and to sell the city additional land for $50,000 an acre.

WEDNESDAY, OCTOBER 22, 2008 A group of Whitco residents visited the October meeting of the Whitesburg City Council to express doubts about the benefits of joining the city and to ask to opt out on becoming part of Whitesburg. Mayor James Wiley Craft told the group the city has never had any intention of forcing anyone to be annexed and the annexation could proceed by going around their homes if they did not wish to join the city.

. City workers are making four old railroad bridges in Whitesburg accessible for walking and bicycling. Workers have poured concrete on a bridge connecting the Appalshop parking lot with the new Letcher County Health Department on East Main Street. Two other bridges are located in the Upper Bottom, and another is past the old Whitesburg High School football field.