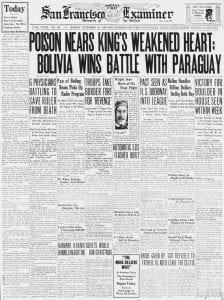 President Calvin Coolidge has granted a pardon to former U.S. Rep. John W. Langley, who represented Pike, Letcher and several other southeastern Kentucky counties before he was convicted of illegally selling alcohol during Prohibition and sentenced to a two-year prison term. Coolidge pardoned Langley, a Republican, on December 20 with the stipulation Langley never again run for election to public office. “Now that Mr. Langley’s citizenship has been restored … he will seek election to Congress again,” The Mountain Eagle reports, noting that Langley’s wife, Katherine, was elected to succeed him after his conviction and is still serving in Congress.

After being away from his hometown of Whitesburg for 60 years after leaving as a youth, James Stamper dreamed of coming back home to visit his brothers, sisters and other friends he hadn’t seen since he left Letcher County for California at age 15. The San Francisco Examiner reported last week that Stamper had been away for so long that when he arrived here by train none of his old friends or family members were able to recognize him. [See related story this page.]

Former Letcher man welcomed home — sort of The images shown above and below show portions of the December 16, 1928 edition of the daily San Francisco Examiner. The Sunday edition of the California newspaper carried a rewrite of an Associated Press feature about a former Letcher County man, 75-year-old James Stamper, who left this area for the West Coast when he was only 15. Stamper told the AP that while he was living in Saratoga, California he frequently dreamt of coming home to see his family members and old friends. When his wish came true, Stamper was surprised when he got off the passenger train here to find that hardly anyone recognized him after all those years apart.

“In order to make his Christmas feast more complete, Charles Wagner of Mayking decided to slaughter a pig he had been feeding for some time,” The Mountain Eagle reports. “When cleaned and ready for the smokehouse it weighed 865 pounds. It was a little over two years old and was of the Chester White stripe.”

More people are sick with the flu now in Letcher County than at any time since 1918, the Letcher County health officials say. Flu has already resulted in the death of one little schoolgirl in Jenkins and has left about 200 people in Haymond and Neon seriously ill. Among those seriously ill with flu in Whitesburg are Dr. B.C. Back, Dr. Childers and Mountain Eagle editor Nehemiah M. Webb.

Whooping cough is raging across Letcher County, say local health officials, who urge that mothers keep their children inside their homes.

Whitesburg city officials are being called on to install extra lighting in the Railroad Street section of town from the corner at the Day Hotel to Kyva Motor Company’s garage. It is said that nighttime pedestrians can hardly see their way with only one streetlight up and operating.

The Whitesburg basketball team defeated Carr Creek, 22 to 14, and lost to Hazard, 16 to 15, in recent games.

The Kentucky Highway Commission’s failure to cooperate with the Codell Construction Company has resulted in the stoppage of work on the Hemphill-Beaver Gap Road until spring. Codell said it was forced to lay off a large number of workers because the state refused to furnish highway engineers so that the work could continue.

Judge Sandy Adams of Millstone has purchased the Norman Hotel in Whitesburg.

Herman Combs, owner of the Dr. Pepper Bottling plant in Whitesburg, is building a similar plant in Hazard.

The Whitesburg Post Office reports that it is having its busiest season in many years. The postmaster says five clerks are being rushed full-time to handle all the Christmas gifts and letters.

Perry Johnson has applied for a license to operate a roadhouse at Whitaker, between Neon and Seco.

Leon Caldwell, the 25-year-old Burdine coal miner who police say killed his wife, mother-in-law and sister-in-law on December 16 has died in a Portsmouth, Virginia hospital, where he was being treated for a bullet wound in his chest. Police said a family quarrel led to the shooting that ended when Caldwell turned the pistol on himself. Victims of the slaying were Delores Caldwell, 25, of Burdine; Ruby Culbertson, 30, of Portsmouth, and Pearl Stout, 50, of Burdine.

Consolidation Coal Company treated its six first aid and mine rescue teams to a banquet Wednesday night at the Elkhorn Country Club in Jenkins.

The new Baldwin electric organ will be formally dedicated at the First Baptist Church in Whitesburg on Sunday, January 2 at 7 p.m. The organ will be dedicated to the memory of Nancy Caudill Lewis, a charter member of the church for 37 years.

The body of Private William Ison, son of Elder John D. and Virgil Gilley Ison of Oscaloosa, was returned home for reburial on December 17. Private Ison was killed in World War II in France while on active duty September 12, 1944. He was 21 years old.

Ten-year-old James Milford Meade was crushed by a rock that fell on him while he was exploring a truck mine opening near his family’s home at Jackhorn. He was a son of Mr. and Mrs. Willie Meade.

The Cordia Lions defeated the Jenkins Cavaliers, 91 to 58, to claim the title of the first Whitesburg Invitational Basketball Tournament.

The nation is expected to produce and use more soft coal in 1959 than it did this year. The National Coal Association this week estimated 1959 bituminous-coal production at 455 million tons, a 13.8 percent increase over last year.

The A&P Store in Whitesburg and Neon is offering bacon for sale at 99 cents for a two-pound package. Eight O’Clock Coffee is on sale for 59 cents for a one-pound bag. A quart jar of mayonnaise is 59 cents.

Two Pike County anti-poverty workers and their young son narrowly escaped death or serious injury when two sticks of dynamite were hurled against their home from a passing car. The bombing took place just after 1 a.m. December 13 at the home of Mr. and Mrs. Al McSurely, organizers for the Southern Conference Educational Fund, a privately financed anti-poverty agency which has been the target of recent investigations and hearings in Pike County by the Kentucky Un-American Activities Committee. The bomb shattered a window in the couple’s bedroom and they and their son were covered with glass fragments. State police and the Federal Bureau of Investigation are taking part in the investigation. McSurley, who has taken part in efforts to organize local residents against strip mining on their land, said he and his family were victims of a conspiracy between Pike County coal operators and local politicians. In 1967 he was arrested by Pike County Commonwealth’s Attorney Thomas Ratliff and charged with attempting to overthrow the Pike County government. Ratliff, a one-time coal operator, was campaigning for the office of lieutenant governor at the time and the FBI concluded that the arrest was politically motivated. A federal court threw the case out of court on the grounds that Kentucky’s sedition law, under which the arrest was made, was unconstitutional.

More than 100 cars bottlenecked on Tunnel Hill outside Whitesburg after an ice storm made it impossible for them to negotiate the hill.

A U.S. Army Corps of Engineers plan to build a dam which would inundate Red River Gorge in Powell County is attracting opposition from across the United States. Associate U.S. Supreme Court Justice William Douglas led a group of 600 persons on a protest hike in the upper gorge. “We don’t have many places like this left anywhere in the United States, including the Far West,” he said.

Whitesburg native Dudley Webb has opened an office for the general practice of law in Lexington.

Seven Letcher County residents have now been apprehended in connection with the crackdown on a theft ring in eastern Kentucky. More than $10,000 worth of property was recovered. The property was stolen by three men in Boyd and Greenup counties and brought to Letcher for sale.

“Christmas lights are beginning to twinkle and shine in Blackey,” writes Blackey correspondent Gaynell Begley. “And the stars of the winter sky are brilliant on these clear, cold nights, with the Big Dipper commanding the southeast sky.”

“The Great Smokey Roadblock” is playing Friday, Saturday and Sunday at the Alene Theatre in Whitesburg.

William B. Sturgill of Lexington, who sold Golden Oak Mining Company to Reading & Bates Corp. in 1981, is buying it back. Reading & Bates, a Tulsa-based oil firm, said it has agreed to sell Golden Oak to an investors group which includes Sturgill and First Chicago Venture Capital, a unit of First National Bank of Chicago.

Eight eastern Kentucky counties, including Letcher, apparently won’t get an industrial recruiter through the Kentucky River Area Development District. Whitesburg Mayor James Asher and Hazard Mayor Bill Gorman asked the KRADD board to create a position for an economic development manager to recruit industry into the KRADD area. The two were met with opposition to the idea and it appears the opposing side has won.

Alicia Cook of Whitesburg was honored by the Army Corps of Engineers for saving the life of a three-year-old girl whom she found underwater at Carr Fork Lake.

The successor to state Rep. Paul Mason will be chosen in a special election sometime in February. Mason, D-Whitesburg, died December 8 at a Boston hospital after a brain aneurysm. The eulogy at Mason’s funeral was delivered by former Gov. Wallace Wilkinson. Three ministers talked of Mason’s love for “the little people,” and the First Baptist Church in Whitesburg was filled with 850 friends, neighbors and officials.

Letcher County Schools have sent Kentucky River Coal Company a wish list for gifts totaling $34,466. The land company, which holds title to a high percentage of Letcher County surface land and mineral rights, had asked for the list. The requests from the various schools included computer software for the Accelerated Reader Program, a computerized weather station, overhead projectors, materials to build telescopes to view the moon and planets, and computer printers

Playing at Whitesburg Cinema are “A Bug’s Life,” “Mighty Joe Young,” The Rugrats Movie” and “You’ve Got Mail.”

Letcher County native George Fugate celebrated his 105th birthday with a party given by the Bluegrass Kiwanis Club, of which Fugate is the oldest member, at the University of Kentucky Faculty Club.

Harding Ison, 85, died December 12 at his residence at Kingscreek. Mr. Ison was a graduate of Whitesburg High School and Morehead State College. He taught at Kingdom Come School, the last one-room school in Letcher County, where he also served as counselor, bus driver, and janitor. Ison and his pupils were featured in a 1973 Appalshop documentary.

Police are asking Letcher County residents to pay close attention to cash they receive and make sure it isn’t counterfeit. Whitesburg Police Chief Scott Adams estimated confiscating about $800 worth of counterfeit bills in the county last week. He said the fake bills are circulating in $1, $5, $10, $20 and $50 denominations.

Seventy-six children from Letcher, Knott, Leslie, Perry and Breathitt counties were each allotted $125 to spend in the Shop with a Cop program. The children were accompanied at the Whitesburg Walmart by Kentucky State Police officers, which Trooper Jackie Pickrell says gives the children a chance to have a positive experience with law enforcement.