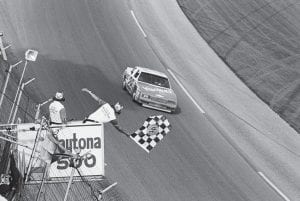 Cale Yarborough of Timmonsville, S.C. drives his Chevrolet to victory in the Daytona 500 stock car race, in Daytona Beach, Fla., Feb. 19, 1984. Yarborough had the fastest qualifying time, won a qualifying race and the 500, a feat never accomplished before at the Daytona International Speedway. (AP Photo/Pete Bauer)

Driver Cale Yarborough won his fourth Daytona 500 this week in 1984.

At the 1979 Daytona 500, the first time the event was ever broadcast live on national TV from start to finish, Yarborough famously got into a post-race brawl with fellow drivers Donnie and Bobby Allison. Yarborough and Donnie Allison had been competing for the lead during the last lap of the race when they crashed. (Richard Petty won the event, ending his 45-race losing streak.) As it happened, a largerthan anticipated audience saw Yarborough’s slugfest with the Allison brothers on TV, as a snowstorm in the Northeast had left millions of people housebound. The fight was credited with helping to put NASCAR on the map and transform it in the coming years from a regional Southern sport to a national phenomenon.

In 1983 and on February 19, 1984, Yarborough won back-to-back victories at the Daytona 500, becoming just the second driver to do so, after Richard Petty’s consecutive wins in 1973 and 1974. At the 1984 Daytona 500, Yarborough became the first driver ever to qualify for the race with a speed of over 200 mph. He retired from racing at the end of the 1988 season with a career total of 83 Winston Cup wins and 70 pole positions.