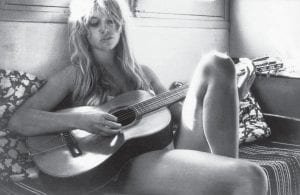 French actress Brigitte Bardot was photographed in 1959 while playing guitar in Saint-Tropez, France. Sixty years ago, a movie in which she starred, “La Parisienne,” was showing at Isaac’s Alene Theatre in downtown Whitesburg. Released in July 1958, some eight months before it came to Letcher County, the film grossed $29.3 million at the box office after being made for $450,000. (AP Photo)