THE WAY WE WERE

When students rode ‘The Coach’ to school 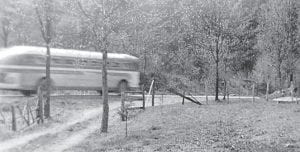 This Cumberland Coach Lines bus was well in motion on US 119 at Oven Fork when Enoch W. Estep snapped this photo, probably in the early 1950s. The bus was one of two Cumberland Coach buses that were used to transport about 100 students to and from Whitesburg High School each day from their homes in the Upper Cumberland River valley. The service cost the Letcher County Board of Education about $975 per month until an agreement between the bus company and school board ended around 1973.

Enoch Estep’s four children — Sandra, David, Jackie and Sheila — rode the bus daily during the years they attended WHS. David Estep, who now lives in Cumberland, remembers the buses picking up students on both sides of Pine Mountain, on the road between Oven Fork and Flat Gap at the Kentucky- Virginia border, and along US 119 to the Harlan-Letcher county line. He said stops were also made at the top of Pine Mountain, at the old rock quarry road, and at the mouth of Pert Creek.

In addition to transporting school students across Pine Mountain daily and to and from locations as far away as New York City for “class trips” during springtime, Cumberland Coach Lines buses played a vital role in the daily lives of many Letcher County residents, especially between the late 1940s and 1961, when the company first attempted to discontinue operating its bus routes from Harlan to Whitesburg and from Jenkins to Hazard.

David Estep remembers the buses operating under the name V.T.C. Lines Inc., before the county school board stopped using the “Greyhound-style” buses for daily transportation to and from the Cumberland River area and began using the traditional yellow school buses. He thinks that move was made during the 1973 school year.