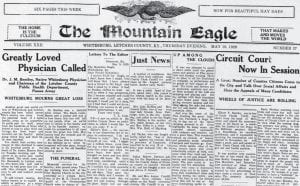 The May 16, 1929 edition of The Mountain Eagle carries a number of stories that indicate Letcher County wasn’t a very peaceable place back in those days. “… Every train and every bus and taxi was bringing people to Whitesburg to see the May term of Circuit Court,” the paper said before detailing the outcomes of three separate murder trials held that week.

Under the front-page headline ‘Kentucky Statistics,’ a column points out that the Commonwealth of Kentucky is 411 miles the farthest point east to the farthest point west and 175 miles from the northernmost tip to the southern border. Kentucky now has 2.2 million people, 50,249 of whom were foreign born. “Kentucky’s undeveloped coalfields could supply the world for 100 years,” the report says.

Cott Polly, convicted in April of escaping from the Letcher County Jail, is filing notice that he intends to ask the governor of Kentucky for a pardon for the offense.

An outbreak of whooping cough is finally subsiding in the Baker [Hemphill] community.

“(On) early Monday morning, every train and every bus and taxi was bringing people to Whitesburg to see the May term of Letcher Circuit Court,” The Mountain Eagle reports.

Raymond Sizemore, 20, was sentenced to 21 years in the state penitentiary this week after pleading guilty to a charge of manslaughter in the shooting death of his mother-in-law, Mrs. George Blair of Rockhouse. The shooting occurred about 10 months ago.

A Letcher Circuit Court jury sentenced Melvin Bentley to a prison term of two years after finding him guilty of murder in the death of Charlie Gibson last December.

The murder trial of Millburn Bentley, charged with killing Charlie Gibson at Neon late last fall, is now underway in Letcher Circuit Court. Meanwhile, the murder charge against Judge W.S Tolliver in connection with the same case has been dismissed.

Letcher County residents this week are “mourning the great loss” of Dr. James Monroe Bentley, a native of the area that is now known as Neon and the director of the Letcher County Public Health Department. Dr. Bentley, a graduate of the University of Louisville School of Medicine, died Tuesday morning, about one week after he contracted a severe sore throat from which he couldn’t recover. His death leaves the county with only two practicing physicians, Dr. Bach and Dr. Cook. Memorial services for Dr. Bentley were held Wednesday afternoon at the First Baptist Church at Whitesburg. Burial was at Sandlick.

Southern Bell Telephone Company’s Whitesburg exchange will convert to the “dial system” at midnight on Saturday, May 21. New directories are being issued this week. All Whitesburg telephone numbers listed in the new directory are new numbers and do not go into effect until after midnight Saturday. The Whitesburg exchange will moves its offices from the Frazier building on Main Street to the new telephone building on Webb Avenue.

N. Wise announces the opening of his new store on Railroad Street in Neon.

The 300 Club and The Grill, both located at Pine Mountain Junction, Whitesburg, will be sold at auction on Saturday, May 29.

Sam Caddy, president of District 30, United Mine Workers of America, will be the principal speaker at the July 4 celebration being planned for Neon.

Kentucky State Police at Pikeville say they will patrol highways US 119 and KY from the Perry County line to the Pike County line, including most of Letcher County. The announcement was made after the state police received several complaints about fast driving in the area, especially coal trucks drivers.

Six employees with a total of 225 years working at Consolidation Coal Company, Jenkins, are retiring. Those choosing to take United Mine Workers Welfare and Retirement Fund benefits as well as Social Security are Henry Wilson, Charles Slaughter, Louis Danley, John Kristovich, T.R. “Dad” Heddleston, and A.J. “Jack” Epperson. Slaughter immigrated to the United States in 1912 and started working at Mine 206 in 1923. Kristovich, a native of Yugoslavia, arrived in the U.S. in 1912. He came to Fleming in Letcher County in 1916 to work for Elkhorn Coal Corporation before landing a job at Mine 204 one year later. Epperson began his coal mining career at age nine in 1896 as a “trapper” for Louisville Coal and Coke Company in Goodwill, West Virginia. He came to Jenkins in 1924.

The University of Kentucky is seeking the names of veterans from Letcher County and elsewhere who were killed in World War II. The names will be inscribed on a permanent “roll of honor” in UK’s new 12,000-seat Memorial Coliseum.

The largest senior class in the history of Whitesburg High School — 154 — will graduate Friday night.

The Letcher-Knott Independent Truck Mines Association wants Gov. A.B. “Happy” Chandler to increase the force of state troopers in the coalfields again. The group sent a telegram to Chandler on Wednesday, saying more troopers are needed to “help avoid further violence and bloodshed” in the coal strike. The strike, now in its 11th week, hinges on the United Mine Workers union’s demands for a $2-perday pay raise to $24.25 and a clause in the contract forbidding operators to handle nonunion coal.

An airport for Whitesburg is among 18 new ones recommended for construction in Kentucky by a federal study released recently. The study, made by the Federal Aviation Agency, recommends that $23 million be spend in Kentucky for development of aviation facilities in the next four years.

A double feature with Frank Sinatra in “Some Came Running” and Jeff Morrow and Mara Corday are in “The Giant Claw” will show May 24-27 at Isaac’s Alene Theatre in Whitesburg.

A Tulsa, Okla., manufacturer of new homes may locate a factory in Letcher County to produce homes for the eastern United States including east Kentucky and the Appalachian area. Tandy Corporation has selected a 42-acre site on Rockhouse Creek near the Letcher Manufacturing Co. furniture plant. Preliminary engineering on the site has been completed and that data has been forwarded to Tandy for final design of its plant and facilities.

A Mountain Eagle editorial praises Yale University students and local officials for working together to transform Fishpond Lake “into a model of a community park.” The editorial urges Letcher County to “take steps to make sure that its new recreation facilities are properly supervised and maintained.”

A second editorial in The Mountain Eagle addresses the upcoming primary election. The editorial says, “At this point we would ordinarily guess that most Letcher Countians will be deeply grateful when it’s over, but this year it appears that most Letcher Countians are candidates, so there’s no telling. Those who aren’t running are closely related to those who are, and in some cases people find themselves caught between two or more relatives running for the same office, sometimes in both political parties.”

Kentucky Governor Julian Carroll came to Whitesburg this week to assure the community that the Whitesburg bypass road will be built despite three failures in a row to obtain satisfactory bids from road contractors. The governor came to Whitesburg for what originally had been intended as a groundbreaking ceremony for the new bypass.

After seven days of testimony in the assault trial of Letcher County Sheriff Vernon Hall, former state trooper B.J. Stephens, Deputy Bill Jones, former deputy Oscar Hamm and Ron Short, the prosecution was expected to present its last witness today and the defense was to begin its case with Hall testifying as the first defense witness. The trial, however, got bogged down Wednesday when Harlan Circuit Judge Sid Douglas called a hearing out of the presence of the jury and spectators to hear testimony from State Trooper Danny Webb, which may not be permissible as evidence.

Angry Stearns strikers threw rocks at non-striking miners as the final chapter closed on the UMW’s tarnished showcase organizing drive at the Justus Mine. The vote was 110-0 against the union because the striking miners refused to vote. They said the union had agreed to a lopsided vote formula that left them no chance of winning.

Showing at the Alene Theatre in Whitesburg is “Blazing Saddles”. There are new admission prices, $2.50 for adults and $1.50 for children.

Carbon Glow residents are driving on new gravel this week after they parked their cars across the right of way and refused to let coal trucks pass until Golden Oak Coal Co. agreed to repair the road. The residents decided to block the road after heavy rain and grader work left it little more than a muddy path. Residents have been complaining about the road and coal trucks to the company, county officials and newspapers for the past five years but the roadblock was their first direct action. Cars blocked coal trucks on their way to the company’s mine and the group refused to let the trucks through until a company foreman promised to work on the road.

Cowan Elementary School has six valedictorians this year, all with perfect 4.0 standings — all A’s — for their eight years in schools. They are Christopher Adams, Miranda Adams, Whitney Cooper, Jerad Ingram, Emma Jacobs and Annie Wilson.

Jenkins has been awarded $747,500 for construction of a city-owned wastewater treatment plant to serve 845 households. The money is from the Community Development Block Grant program administrated by the Department of Local Government.

All high school students in the Letcher County school system may attend the same school within the next few years. Members of the school facilities planning committee voted 8 to 3 to recommend that the county board of education establish a comprehensive high school in the Whitesburg area.

More than a third of the people whose wells were damaged by mining in the Camp Branch and Indian Creek areas still don’t have adequate temporary or permanent water supplies, state mining officials say. A report by the Department of Surface Mining Reclamation and Enforcement says that of 18 homeowners whose wells were determined to have been damaged by Golden Oak Mining Co., all have adequate quantities of water, but only 11 have water of adequate quality. The remaining seven have systems that are not in compliance with state standards, meaning they have no temporary or permanent supply of water.

“We usually have dogwood winter about May 10, but we have one in our yard and it has already shed its blossoms,” writes Ice correspondent Sara C. Ison. “I guess these little winters come when something sheds its blossoms. Old people said if we had an early Easter spring would come early.”

The three-day Jenkins Homecoming Festival will be held August 26, 27 and 28. The theme of this year’s festival in “Year 2000, Here We Come.”

Police have broken up an interstate OxyContin trafficking operation responsible for the illegal sale of “tens of thousands” of tablets of the highly addictive painkiller in Letcher and surrounding counties.

Police in Letcher County have arrested Timothy Keith Tyree of Sandusky, Ohio, who is accused of murdering a woman and leaving her body burning in a wildlife refuge. Letcher County Sheriff ’s Deputy Michael Burton and Whitesburg City Patrolman Tyrone Fields arrested Tyree after finding him at Dry Fork in a minivan that belonged to his alleged victim. An official with the Erie County (Ohio) Sheriff ’s Department said he had received tips that Tyree was “probably down in that area. Within a couple of house of contacting the sheriff ’s office, they had him in custody,” the official said.