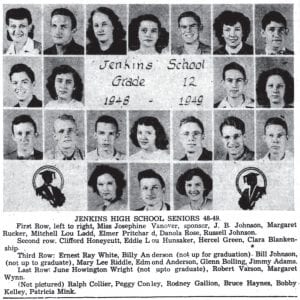 The May 26, 1949 edition of The Mountain Eagle carried this collection of photographs of seniors from Jenkins High School, two days after commencement exercises were held in the high school’s auditorium. The photos and accompanying information appear as printed 70 years ago this week.

Letcher County farmers continue to be behind in their work “on account of too much rain.”

Editor E.P. Blair of the Hazard Mountaineer newspaper was a visitor to Whitesburg earlier this week.

The Mountain Eagle is now 10 weeks away from celebrating its second birthday.

“By the time both parties get through with the tariff bill now pending before both houses of Congress, poor old Mr. Protection and Miss Freetrade will be ugly-looking specimens to walk out before the country,” Mountain Eagle editor Nehemiah Webb writes in an editorial. “ … A spectator witnessing the daily whacking in progress up at the Capitol could not tell an old-fashioned Free Trade Daniel from a Protectionist Allison to save his scalp.”

The headwaters of the North Fork of the Kentucky River is in a boom of activity, a big band saw mill will soon be in operation there and in need of employees.

Leonard Fields, whose conviction earlier this year in the slayings of two Letcher County sheriff ’s deputies was expected to be overturned by the state Court of Appeals, will instead remain in prison for two 21-year terms in the deaths of Willard Hall and Dave Galloway. Fields was convicted of aiding and abetting his wife, Lona Fields, in the murders of Hall and Galloway at the Fields home near Eolia in December 1947. After a Pike Circuit Court jury convicted Leonard Fields, a Harlan Circuit Court jury acquitted Lona Fields after testimony showed that Hall and Galloway were at the Fields home threatening the occupants if they didn’t start paying more money to the deputies for the right to bootleg beer and whiskey. While a charge of aiding and abetting against the Fields’s 17-year-old son was dismissed after the acquittal of Mrs. Fields, the Court of Appeals last week overruled a petition for rehearing the case against Mr. Fields, who is a prisoner at LaGrange.

The Kentucky Court of Appeals has reversed the sentence of life in prison handed down to Jody P. Adams in July 1948 after he was convicted of murdering Letcher County Constable Howard Polly last Easter Sunday near the highway junction leading to Hot Spot. The appeals court ordered the sentence reversed because jurors became separated before the verdict was returned.

About 400 United States citizens — 10 of them from Kentucky — lost their lives in Memorial Day weekend highway accidents.

Two brothers-in-law, one of them a Letcher County sheriff ’s deputy, were wounded in a gun battle at Linefork on Sunday night. Deputy Henry Ison, 38, was taken to a Hazard hospital for treatment of a chest wound allegedly inflicted by his wife’s brother, Hiram Mitchell, 50, of Roxana. Pellets from a shotgun blast fired by Ison injured Mitchell. Both men are expected to recover quickly. No arrests were made after the incident.

Letcher County Deputy Sheriff Jim Short and federal Revenue Officer Hollis B. Gibson seized a moonshine still on the head of Linefork on Monday night. Confiscated during the raid were six and one-half gallons of moonshine whiskey, two tubs of beer, a shovel, saws, hoes, and other implements. Arrested and charged with owning and operating the still was James Dixon, 63, who lives at the top of the hill separating Letcher and Harlan counties.

Sergeant Willie Sandlin, 59, Kentucky’s only native World War I soldier to win the Congressional Medal of Honor, died in a Louisville hospital Sunday of complications from one of many lung infections he suffered periodically since inhaling poisonous gas during combat in 1918. A small farm operator near Hyden in Leslie County, Sgt. Sandlin was presented with the Medal of Honor for the bravery he showed while single-handedly destroying a machine-gun nest and killing every member of its crew at Bois de Forges, France in September 1918.

The Commonwealth of Kentucky celebrated its 157th birthday on Wednesday, June 1.

Work is underway on an extensive renovation of Doermann Memorial Presbyterian Church at Blackey. The church roof is being replaced and the building is being painted. Sunday school rooms are to be constructed in the basement. The church has been without a pastor for the past two years, but the appointment of a temporary pastor to serve at least for the summer is expected soon. Funds for the church renovation are being paid by local members and members of churches throughout the South through a “Give One Day’s Pay” campaign. The Hazard Presbyterian Church is also helping.

Mrs. Ed Moore was elected president of the Whitesburg Business and Professional Women’s Club at a business meeting last week. Miss Jeanette Wampler has served in this capacity for the past year.

Daniel V. Quillen, son of Mr. and Mrs. Daniel Quillen Sr. of Neon, was one of 174 Berea College seniors receiving degrees May 31.

Shirley Jo Wojciechowski, a graduate of Jenkins High School and daughter of Mr. M.V. Wojciechowski of Elkhorn Avenue, Jenkins, received a Bachelor of Arts degree from Union College in Barbourville at the school’s 80th commencement exercise.

A spokesman for the Army Corps of Engineers told Letcher Countians this week that the Corps does not plan to proceed with the Kingdom Come Dam project — at least not right now.

Sen. John Sherman Cooper of Kentucky has introduced a coal mine safety law amendment in Congress to tighten requirements for construction of roof supports. Cooper said more than half of all fatalities in coal mines are caused by roof or wall collapse.

The Whitesburg Veterans of Foreign Wars will hold Memorial Day services at cemeteries throughout Letcher County on Sunday, June 1.

After nearly three weeks of testimony and a change of venue to Pike County, the jury returned not guilty verdicts in assault trial of Letcher County Sheriff Vernon Hall and former Whitesburg City Policeman Bill Jones, followed the next day by the acquittal of former State Trooper B.J. Stephens. Deputy Oscar Hamm and Ronald Short were found guilty of assault in the third degree, with a punishment of a $25 fine each. All five men were charged with beating James Keel of Millstone.

Letcher County’s proposed 1979-80 appropriations falls more than $400,000 short of the current year’s estimated expenditures, according to the proposed budget. County Treasurer Ray Collins explained the differences are the result in a loss in revenue sharing funds, the uncertainty of community block grants and additional money received last year from the state highway department.

Clarence E. Smith, Jr., son of Helen Smith of Jenkins, has been commissioned a second lieutenant in the U.S. Air Force upon graduation from Officer Training School at Lackland AFB, Tex. He is a 1965 graduate of Jenkins High School and earned a bachelor of science degree from Weber State College and a master’s degree from Central Michigan University. His wife, Charmia, is the daughter of Mr. and Mrs. William Anderson of Jenkins.

“We hear that Eddie Wayne Cotton killed a rattlesnake this past week that measured 47 inches after 10 rattles and a button had been removed,” writes Linefork correspondent Thelma N. Cornett. “We are glad that is was killed and is no longer at large.”

Absentee ballots changed the outcome of one Letcher County race. Homer Rose, who had been one vote behind William H. “Billy” Keel in the District 3 magistrate’s race, won by two votes when the absentee ballots were counted. Keel received five absentee votes to Rose’s eight.

The Kentucky River Area Development District spends too much on dinners and too little to help the poor, said State Rep. Paul Mason. Mason said the KRADD board should stop paying to hold conferences in hotels and hold them instead in its own building to save money. According to KRADD executive director Percy Elkins, a recent conference held at the Hazard Holiday Inn cost $10,000, including $2,000 from KRADD. The agency estimates it will spend $35,000 this fiscal year on a budget item called “local expenses” which includes among other things, meals prepared for KRADD meetings.

A pickup truck pulled from the waters of Carr Creek Lake was apparently stolen from a McRoberts man, police said. A telephone lineman had spotted tire tracks leading to the edge of a cliff overlooking the lake in front of the old Carr Creek School and reported them to police. Divers went down to search for a body, but none was found. State police said the truck had not been stripped, and had apparently been pointed at the lake and pushed over the cliff

Crappie fishing is good at Carr Creek Lake this week on minnows and jigs, floats and minnows and by trolling five to 20 feet, the lake staff reports.

The U.S. Postal Service should begin soliciting for a contractor to build a new post office in Whitesburg in the next 30 to 45 days. The new office will be on property next to Pine Mountain Grill on U.S. 119.

Police officers will carry the Special Olympics torch through Letcher, Knott, Perry and Breathitt counties today to raise awareness of the athletic event for handicapped children. The torch run will begin at 8 a.m. on U.S. 23 at Pound Gap. Police officers will carry the torch through Jenkins and Neon, then regroup at 9 a.m. in front of the Letcher County Courthouse to resume the run.

The old Whitesburg Airport will soon be private property. The city council voted May 18 to sell the 59-acre airport property to Kenneth Martin of Floyd County. The airport sits on a ridge at the Letcher-Knott county line. Martin bid $26,100 for the property.

Kristin Roberts, a student at Fleming- Neon High School, has been awarded the All-American Scholar Athlete Award from the National High School Institute. She is the daughter of Sharon and Raymond Roberts of Sergent. She was also named to the Big Dipper 1999 All-Mountain Senior Team.

The Letcher County Water and Sewer District will lose $1.37 million because of a failure to obtain the necessary easements to lay sewer lines in the Blackey/Jeremiah area unless funding agencies can be convinced to reallocate the money for other projects within the county. The board of directors was told at its May meeting that only 17 out of 60 residents of Blackey have been willing to sign easements. A PRIDE grant of more than $1 million will be lost unless PRIDE is willing to allow the money to be used for other sewer projects in Letcher County.

Jeremy L. Stewart, 32, a coal miner from Beefhide, was killed in an accident at a mine operated by J&A Mining, Inc. The coal fatality is the second of the year in Kentucky and the sixth of the year in the United States. All have occurred at surface mines.

Fire Chief Truman Thompson is retiring from his position after working at the Whitesburg Fire Department for 34 years. Thompson, who spent the last 11 years as fire chief, said he is retiring for health reasons and to spend more time with wife and children, as well as fishing and carving wood.